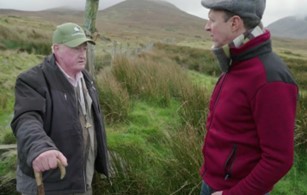 RTÉ One’s Ear to the Ground continues this Thursday (December 22nd) at 7 pm with the next episode, which covers ‘The Gathering’, deer and wreaths.

Every winter, ewes and lambs are taken off their summer mountain pasture all over the country and brought down to the lowland for breeding and returned again to the uplands on Christmas Eve.

This tradition is called ‘The Gathering for the Ram’ and has been going on for millennia.

This year, Darragh Mc Cullough headed west to help round up the sheep on the Sheaffrey Mountain Range in Mayo.

It is a race against the rain and the fog as Darragh joins a group of locals for the day’s task.

Helen Carroll spent the day with members of the Wild Deer Association as they took part in a cull, which helps control numbers.

The meat from some of those deer is donated to Lámh Fáilte – a Dublin-based charity that helps feed people on the streets of Dublin.

The meat donated to Lámh Fáilte is processed by Paul Fletcher from Premier Game in Mitchelstown and made into venison burgers.

Every few weeks, Paul and members of the Deer Association come to Dublin and create a barbecue.

Conor Browne is not your typical farmer. Having started selling Christmas wreaths from the age of 10 years, he now produces 150,000 wreaths a year, over half of which are exported to UK and the EU.

Conor has no farming background but bought his first farm five years ago.

Ella McSweeney visits Conor on one of his south Wicklow farms to harvest noble fir foliage for the Christmas market.

Previous article on ‘Without reducing my herd number, I will not be able to hit a 25% reduction in emissions’ – 320-cow farmer