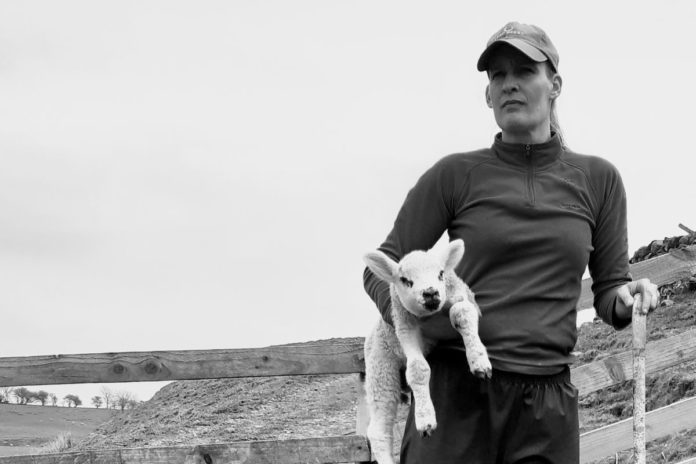 In this week’s Women in Ag segment, Emma Skidmore, a ‘townie’ discusses her former life before she became a farmer, their flock of 800 sheep, blogging, a part-time off-farm job and motherhood.

As I write this, it is 1 am on a cold, windy Friday morning in Cumbria, and I am sitting in the lambing shed. I am currently waiting on a mule shearling to lamb; it’s the second of three lambs, and I thought rather than jump in, as she’s not in trouble, I would multitask and write this. It is a million miles away from my life seven years ago.

To note, I grew up in an ex-council house in Billingham, Teesside. Teesside in the 80s/90s was the industrial heart of the North East, and due to this, Teessider’s are often referred to as ‘Smoggies’.  This was due to all the smog that ICI produced.

I loved everything about town life and the ease of having everything on your doorstep. However, I never imagined that I would ever end up living in Cumbria, with the dramatic backdrop of the Howgills being my back garden.

My name is Emma Skidmore (age 42), and my husband is Andrew Skidmore (aged 38). We have three children, Liam, aged 12 from my previous marriage; Jessica, also 12 from Andrew’s previous relationship and our daughter Amber, aged 4. 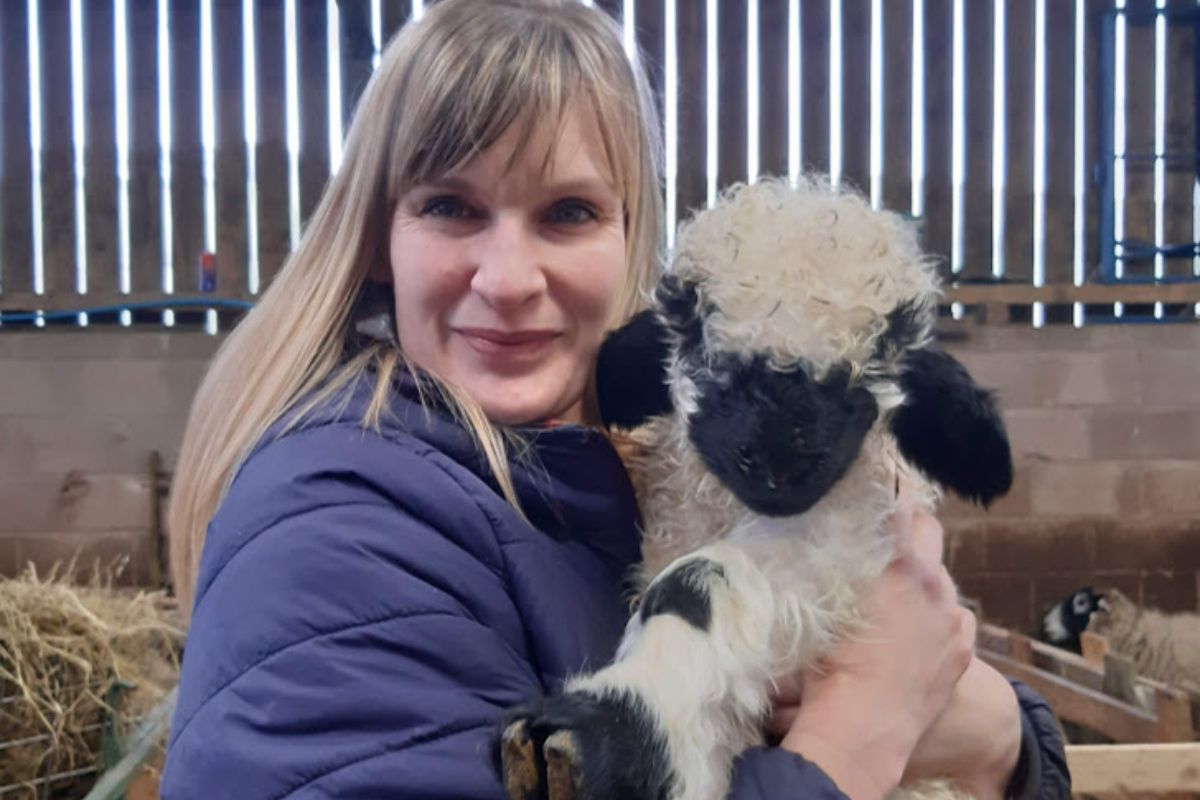 I met Andrew 8 months after my 13-year marriage ended. We have been together almost seven years and met through a member of his family.

In December 2019, we eloped to be married, and in typical farming fashion, we were back working on the farm the next day.

We purchased Flakebridge Farm in January 2017 with Andrew’s father’s help. The farm is 3 miles from Tebay, Cumbria, on the border of the Lake District and Yorkshire Dales.

We farm 180-acres plus also have rights to Langdale Fell and currently have approximately 800 sheep, a mix of different breeds.  The majority of the sheep are Swaledales, which is one of the reasons we moved to what Andrew calls ‘Swaledale Country’.

We have them to a high standard, and Andrew has won shows with them, including what we call the Swaledale World Cup, aka Muker Show, which he won in 2016.

Also, we have a small flock of Valais Blacknose Sheep, one of which was a reserve champion in a countrywide virtual sheep show over the summer.

We usually start lambing at the end of March, but this year Andrew decided we would start earlier with bought in mule ewes, so it will be a long lambing this time.

I normally do the late shift; hence the time I am writing this. I don’t mind the late shift, but it’s hard when the weather is rotten, or I am still working in my other part-time job as a medical secretary for older adults.

I take 2-3 weeks off work to help with lambing as there is only me, Andrew and the kids here to work. 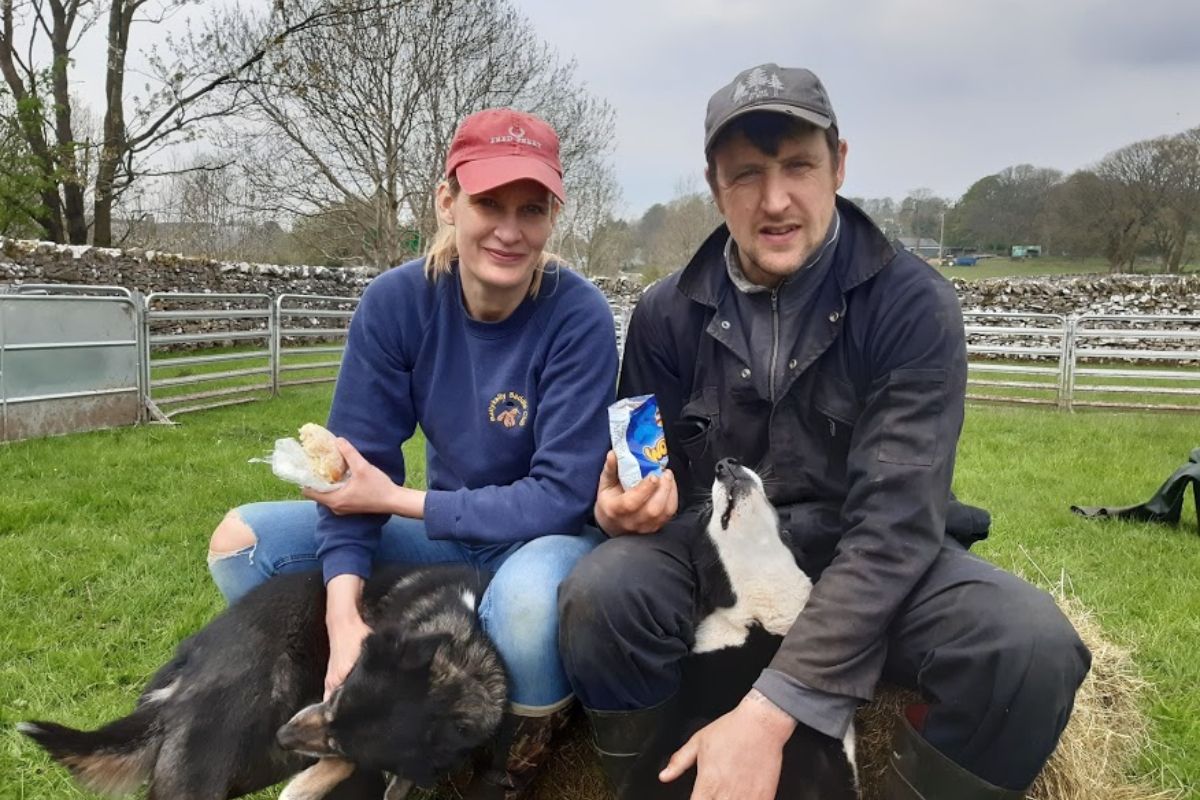 I think women in agriculture don’t get the recognition they deserve. How does the old saying go? “Behind every great man, there is a GREAT woman”.

I think this is so true as many farmer’s wife’s, girlfriends and partners may not be directly involved in working physically on the farm, but they are the people working silently behind the scenes.

Since we moved to Flakebridge, not only do I have my own part-time job. I also do the farm accounts and work on the farm on my days off and when I come in from work.

I run the house and deal with the kids in numerous activities such as hockey or band practice. Also, I do all the paperwork for the different schemes we are in, such as Red Tractor.

We have also diversified into glamping pods on the farm, which will be up and running in July 2021. Also, I have taken on the cleaning and promotion for that.

Women in agriculture seem to be excellent at multitasking and juggling all the different things they do. 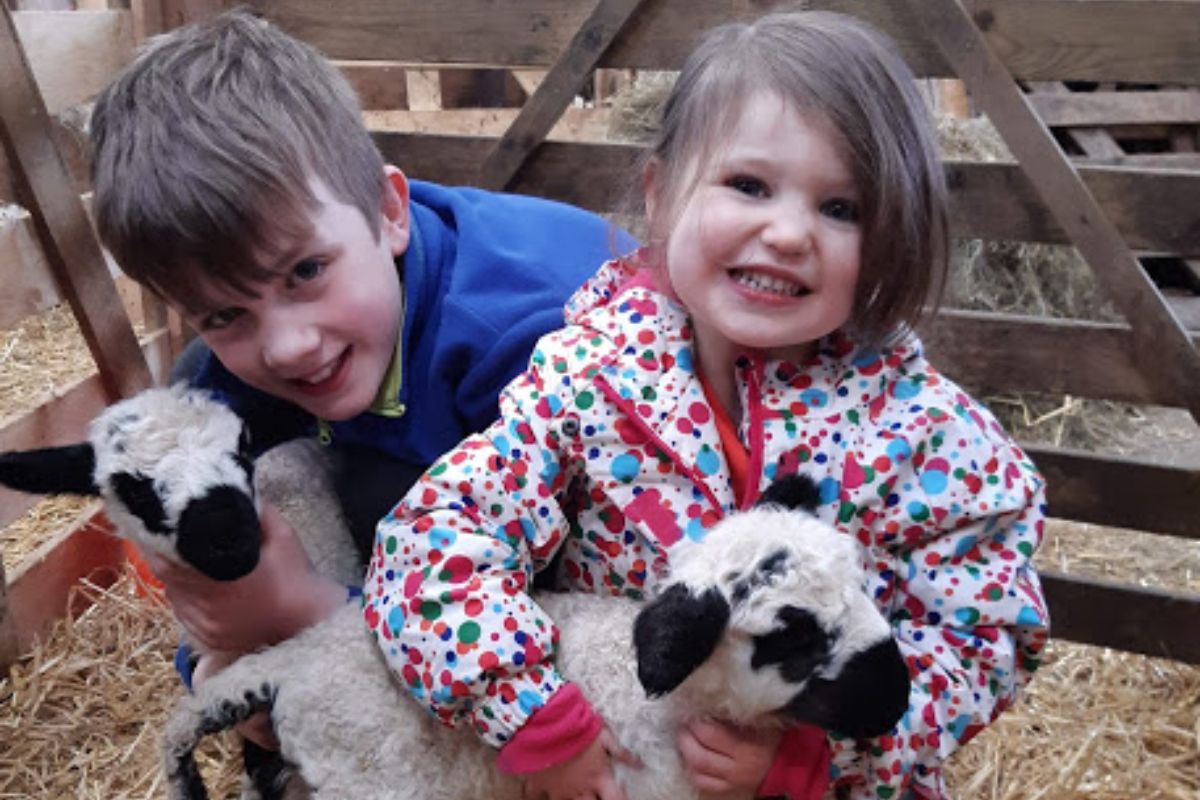 I’d always wanted to write a blog and felt that I would do one from a townie point of view.  There are a lot of people at the moment writing about becoming shepherds and wanting to be a farmer all their life.

I hadn’t wanted to be a farmer as a child; I wanted to be a jockey, page 3 model or a fighter pilot after watching Top Gun. Then I realised I couldn’t fly and I was too tall. I seem to have swapped concealer for cow poo and heels for wellies.”

I loved my town life, nights out and designer clothes. I’d always promised myself a pair of Jimmy Choos or Manolo’s for my 40th birthday. But, I ended up with a pair of new wellies instead. It’s amazing how your life can change.

I quickly realised that if I wanted to be in Andrew’s life, I had to take an interest in farming and found I loved it.  I’m constantly learning something new, like today when I realised I don’t like the smell of lamb poo, and dead lambs will not drink a bottle of milk.

It’s probably the toughest thing I have ever had to do. There are many times that I could quite happily sell up and move back to Teesside, but that feeling doesn’t last long.

I also wanted to show in my blog that it isn’t always “living the dream” that others portray it as. 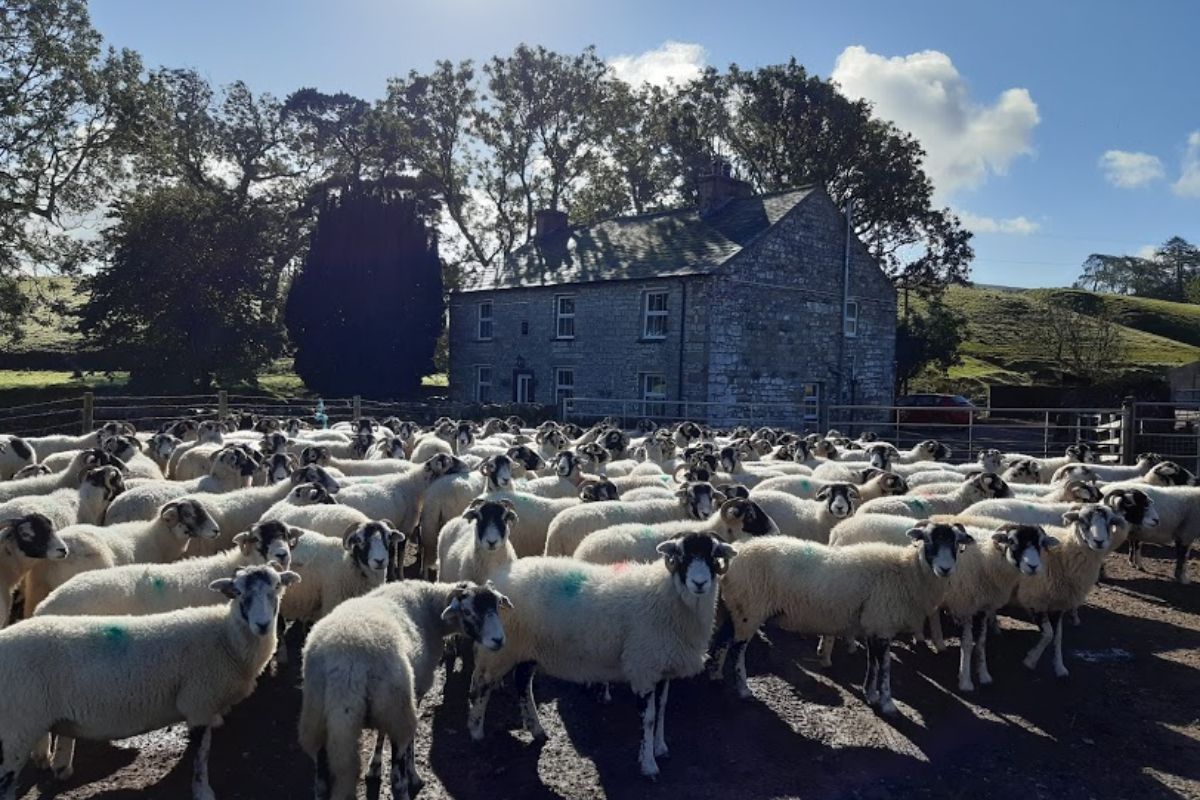 Death is a constant companion where sheep/lambs are involved.  It’s a hard life, it can be lonely, and there are times when you dread the postman turning up with yet another bill.  There’s a reason mental health is such a big issue amongst farmers.

The biggest thing I have learnt is farming is changing. With the stopping of the RPA payments and the new schemes becoming available, we have had to change our way of working.

We are planting trees, building walls and have diversified into glamping pods to showcase the area, our sheep and involving people in showing them how a farm works and also for them to be able to get involved and ‘hands mucky’. 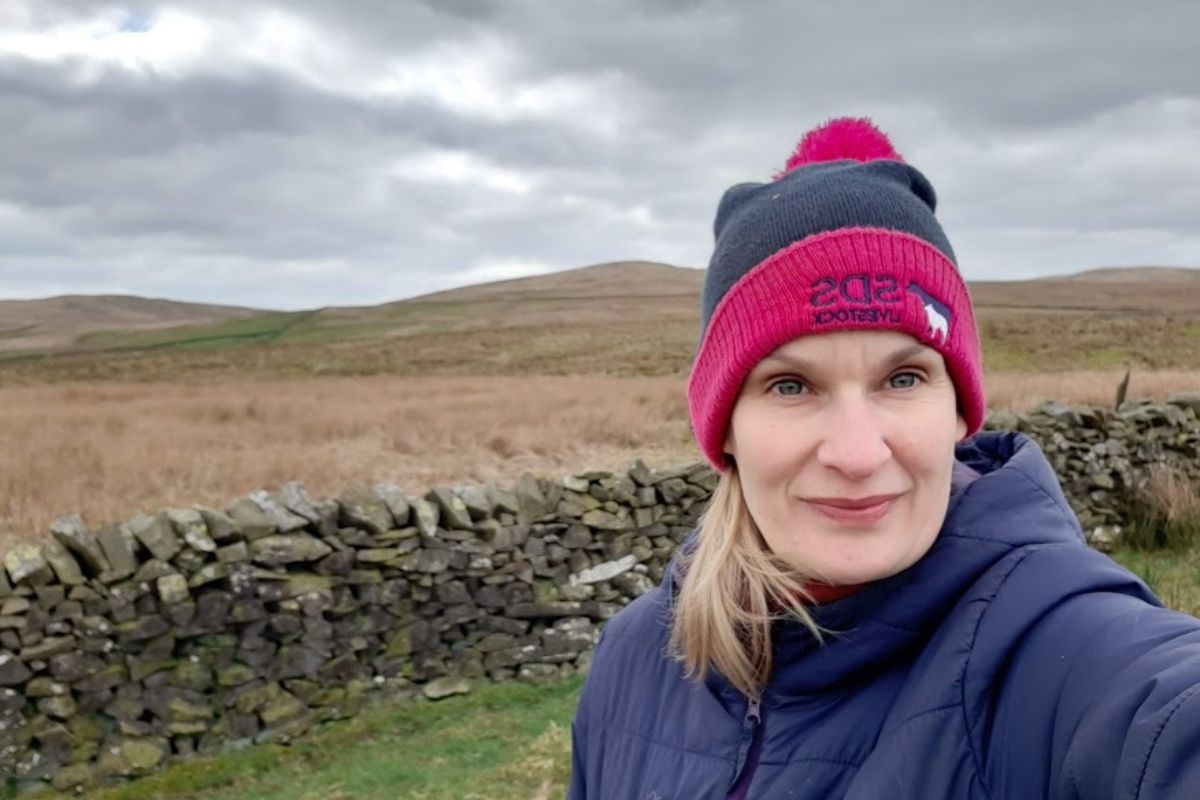 There are so many people who, like me, grew up in a town, think that eggs come from the supermarket and have never seen the stars due to street lights/light pollution.

Here we are in the dark skies area, and I’ve never seen the stars shine so bright.

It sometimes feels a bit wrong to say we would be more financially secure if we didn’t have any livestock here at Flakebridge and the whole farm was entered into environmental schemes, but this, to me, isn’t farming.

I feel both the environment and livestock complement each other and work hand-in-hand.

You can find more on Emma’s blog here.