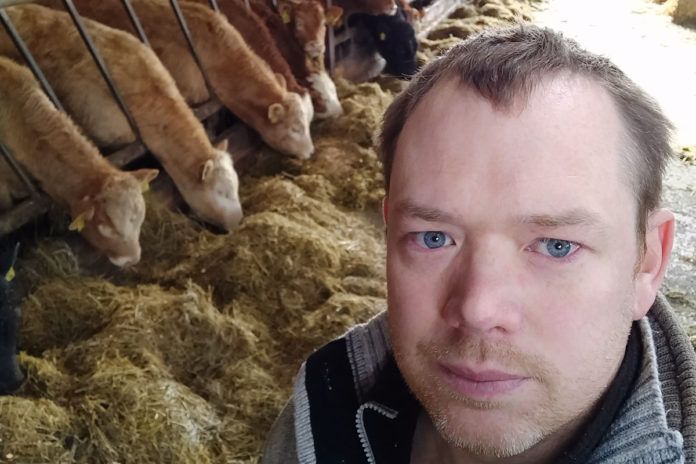 A simplistic farming system is key for Shane O’Connor, who juggles a 30-strong suckler herd with family life and a full-time position as a planning/construction engineer.

“Historically due to facilities, I wouldn’t have had the space needed for calving a large number of cows in one season.” the west Roscommon native explained to That’s Farming’s Catherina Cunnane.

“But more recently, autumn-calving takes some of the pressure off during the spring when I’m working full-time. It’s nice to be able to stagger when you bring stock out to the mart also.”

Heifers are generally AI’d with a view to calving these down between 24-30-months, while a Limousin bull, with a terminal index of €173 and a maternal figure of €173, dominates the pastures with cows; a number of breeding females are also AI’d to Charolais sires.

“I use Aberdeen-Angus sires only on heifers – my target is to get them out easy and not put too much pressure on them. That way, they will hopefully go back in-calf faster.”

“Because I work full-time in an off-farm job and have a young family, I need to spend as little of my time as I can on the farm; this includes calving time.”

“I am thankful that I have a very patient partner and a young daughter that loves cattle.”

Heifers go under the hammer, as stores, at Shane’s local mart, while others are retained as replacements in line with his closed herd policy.

Bull calves are generally sold between 7-9-months, with the exception of weanlings less than 300kgs which are castrated and kept until they are stores.

Shane relishes the idea of farming full-time, but said this is not possible due to land and financial constraints. He intends to maintain his current herd size whilst improving land fertility and drainage.

“The head has to outweigh the heart when it comes to the beef sector at the minute. I would love to increase numbers, but the returns aren’t there for the investment and workloads involved.”

“I think the type of soil we are on around here will need a lot of work to cope with the increasing volumes of water we are seeing year-on-year.”

“Economically, whether it makes sense to do this work?…not at present beef prices!”

He plans to change his current stock bull, which will leave him with the choice of either purchasing a Charolais bull for “optimum” weanling prices or possibly reducing cow numbers and bringing cattle through to slaughter.

“I think suckler farming, as we know it, will change. There are very few lads under 40 going at suckler farming full-time – unless they have big areas of ground.”

“Small suckler farms will need to be run alongside an off-farm job if it’s to survive.”

He believes that the only way to protect the suckler sector, without applying a direct subsidy, is to introduce a “decent” environmental element into the new CAP.

“I think a direct subsidy is only going to increase numbers, that’s not what we need.”

“With the majority of suckler cattle being reared in the most naturally, challenging countryside, it would primarily focus on them.”

He said it could be linked to a stocking rate with most of these farmers practising extensive farming as their soil-type and land base provide limited options.

He welcomed the possibility of attaining PGI status for grass-fed, suckler-bred Irish beef, but stressed that investment would be required to fund a marketing strategy to explain the difference to consumers.

“While I’m sure factory farms are doing everything above board and within regulations, the grass-based suckler beef has to be seen as a premium product.”

“To me, it’s a bit like the caged hen and free ranged ones; there are big welfare and feed differences.”

When outlining his future plans, O’Connor admitted that he is concerned about the definition of a ‘part-time farmer’ under the next CAP.

“I know a lot of full-time farmers who are a lot less efficient or put in fewer hours than I do.”

“Efficiency is the key for me – it allows me to work full-time and farm, but I’d hope I’m not going to be penalised for that in the next CAP review.”

“I farm part-time in the hope that someday there will be a living to be made off what I am building,” Shane concluded.

- Advertisement -
Previous article
Want to earn up to €50,000/year?
Next article
New conservation plan to create 70 jobs in the Midlands