That's FarmingThat\'s Farming Irelands Largest Farming News, Properties and Classifieds Network
HomeDairy‘I cannot see why in 20 years we could not have a... 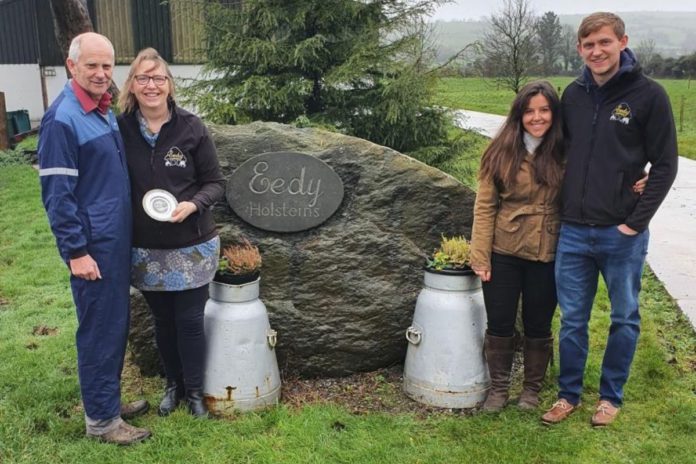 In this week’s dairy segment, That’s Farming, speaks to Robert Helen, from Eedy Holstein Friesian. He discusses expanding numbers, why the family selected the breed and

“We had to expand in milk to make a reasonable living. Honestly, we were not going to survive on 20 cows and 100,000-litres of milk,” Robert Helen told That’s Farming.

“We chose Holstein Friesian because we have a relatively small land base and the idea was to get a high output per acre.”

“The reason we went for winter milk was we got a winter milk bonus originally when we started up and to help cash flow throughout the year.”

In 1960, Robert’s mother established the pedigree arm of the dairy enterprise with the Daisy cow family.

Other embryos include Louella, Acclaim, Sweet, which were brought in twenty years ago and the Barbie cow family, sourced in Holland recently.

The farm has a two-day paddock system, giving cows a fresh supply of grass each milking.

“We always have grass going into the diet from February 20th. Then, we would have grass in the diet until the weather allows to the middle of November.”

The farm has a 90-acre miking platform with a split calving system of both autumn and spring.

“We do not use a 6-week calving rate as a figure here. We calve between September and May 1st. So, the calving interval is 410 days.”

“The reason for calving that period is we have more cash flow, and it also spreads workload as well.”

“Our average number of days dry is about fifty in a year, so we want to get long lactations.”

The farm uses synchronisation and AI on heifers, with a home-bred Holstein Friesian bulls for mopping up.

“We had one of the highest production bulls. EEDY DIVA OMAN, AI code: EDV, in Munster AI/Progressive Genetics’, was the highest daughter fertility ever tested.”

“We might use sexed-semen on heifers and some cows, but not an awful lot, because some of the bulls we use you can only get them sexed.”

“We keep some bull calves for breeding, and then any calves we do not keep for breeding we sell as calves at 2 to 3-months old.”

“Then, we keep all heifer calves which calve down at 2-year-old usually, and we sell some of the heifers for breeding.”

Robert outlined his ideal Holstein Friesian cow and traits he seeks in his dairy herd.

“We would be looking for a 650kg to 700kg cow with good strength, udders, legs, feet, with high milk, high protein, and high milk solids. So, our average cow would be, on average, 650kgs.”

“Our average somatic cell count is between 80 and 90, and our average total bacterial count (TBC) is 8.”

“We would feed all calves with our milk, and fatten all our cull cows. We would be running a bit ahead this year, slightly maybe 10kgs to 15kgs of milk solids a cow.”

Robert feeds under two-tonne of concentrates and a maximum of 8kgs through the milking parlour to achieve these figures.

“We also try to classify cows with the IHFA. Eedy Acclaim’s dam and grand dam would have been classified as 95 points. It is the first time we had two Irish-bred cows, dam and daughter, classifying that high.”

Other successes for the herd include securing the overall female silverware at all west Cork shows in 2017.

Milking is completed twice a day over 90 minutes through a Gascoigne 14-unit milking parlour, which Robert gradually upgraded from a 4-unit.

“We could not afford to spend much money on milking parlours as we had to abide by milk quotas. So, we started small and worked our way up.”

“We originally put the parlour in such a way that we could keep adding to it and make it bigger as we went along.”

According to Robert, “there is always challenges”, meaning he keeps “a watch at all times” on (TBC), total bacterial count and somatic cell count (SCC).

“It is the detail that what matters really, success is in the detail. So, the same with breeding cows, we would be very conscious about how we breed cows.”

“So, we use bulls, not with the highest EBI but will not use bulls with big weaknesses or bad on somatic cell count, protein, milk solids, butterfat, milk, fertility, or conformation.”

“They all have to be ticking all those boxes. Generally, we end up with a high EBI bull by doing that, but you might not end with the highest EBI bull.”

“We would be on the top couple of percentage on the sub-index, so we might want to improve fertility a little.”

“However, we would not be on for improving fertility at the expense of conformation or milk production.”

“Originally, when I got into farming, the biggest challenge was to get a milk quota. That was a way bigger challenge than the current challenges of now.”

“At that time, we had to buy cows, put in buildings, a milking parlour and everything that goes with it, along with improving land.”

“The challenges with farming now are these new rules and regulations and environmental challenges. There are going to be challenges going forward.”

“We are not sure what those challenges are until there are numbers.”

Robert hopes to hand over the farm after he retires to his son Jason, which he currently farms in partnership with, alongside his wife, Sylvia.

He outlined, “a lot of money, land, infrastructure, and bigger milking parlour” are required to expand the herd size.

“The potential is there to do close to one-million litres, just expanding to 100 cows without spending a lot of capital. So, we are nearly out to the maximum.”

“Recently, we had our first cow of three cows (from the Barbie, Louella, and Pietje cow family) who give us a tonne of milk solids per lactation.”

“I think we are unique here. We are producing an extremely good product, but it is all very well to be producing a very good and a high-quality product, but, at the end of the day, we need to get paid for it.”

“If we are producing a really good product, everyone else seems to be getting paid for it. So, it is all down to we need to get paid to produce it.”

“It has its challenges. We started from the beginning, and I think we have been lucky. We have been quite successful, but that success is not just down to me; it is down to my wife, children, and my brother. So, it is not an individual accomplishment.”

“We have been lucky with good health. There are ups and downs, there is no doubt about that, but it is all about making the right decision at the right time.”

“I think you are better going slowly in the right direction than fast in the wrong direction,” the dairy farmer concluded.

- Advertisement -
Previous articleSuckler pairs to €2,000 and culls to €2,100 at Headford
Next articleLand sells for €30,000/acre after 5-strong bidding battle