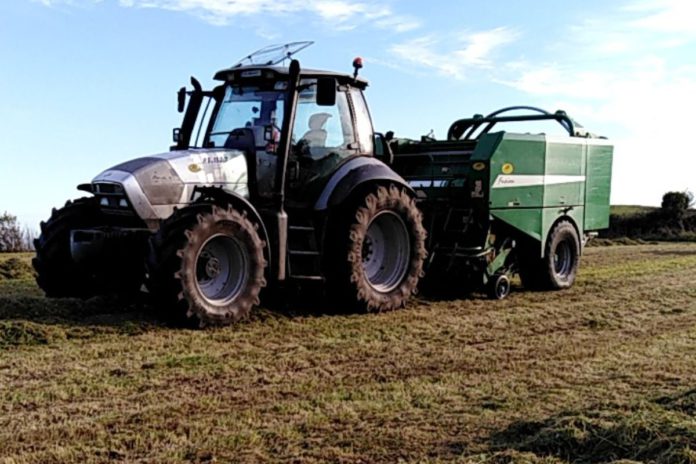 Growing up on a tillage farm in Curraghboy, South Roscommon sowed the seed for Eddie Egan (25).

He developed an interest in farming and machinery at an early age and was greatly influenced by his father – a keen ploughman who owned a range of machinery and offered agricultural contracting services to a number of local farmers.

“I wanted to be out doing something with machinery so from an early age I kind of had it set in my head that this was the route I wanted to take.” Eddie Egan told Catherina Cunnane – That’s Farming.

Eddie enrolled in a Level-7 Bachelor of Business in Rural Enterprise and Agri-Business at Mountbellew/ G.M.I.T, following the completion of his Leaving Certificate in 2012.

“This course focused on the practical side of agriculture and other aspects including accounting and entrepreneurship.”

The Roscommon native then studied a Level-8 in Business Management – a degree programme that focused primarily on finance, taxation, marketing and advertising.

He graduated in June 2016 aged twenty-three and established E. Egan Agri-Services – his own agricultural contracting firm.

Up until then, Eddie was a full-time student and worked part-time for a local dairy farmer.

He applied for a bank loan in the middle of his final exams and purchased his first two machines – an Amazone Power-Harrow equipped with an APV Air-Seeder to carry out work for a local mushroom farmer and a 12-tonne Rear Discharge Muck Spreader.

“My parents have given me great encouragement and help since starting out.”

“They provided me with a tractor in my first year out which was a massive boost until I could buy my own.”

His extensive fleet of tractors now include a Lamborghini 150.7, a Claas Ares 657 and a Same Antares 130,

He owns a Mchale Fusion, a Jeantil 12-tonne muck-spreader, a West 6-tonne Dual Spreader and a Staltech 3m Disc Harrow.

Other items include a 3mtr Amazone KG power harrow and APV Air Seeder, a 2400-gln Major Tanker, a NC 3000 Agitator and a 2-tonne Amazone Fertilizer Spreader with GPS, mowers, plough and a sprayer.

He offers a range of services including reseeding and all other types of tillage-related work, slurry spreading (splash plate and low-emission spreading), muck spreading, fertiliser spreading with GPS and spraying with GPS.

Eddie – who has up to three part-time employees – reseeded 55-acres on contracts in his first year of business and this increased to 440-acres on hire last year.

“I’m lucky in that South Roscommon has some very progressive farmers. Without the volume of work that they are creating, it would be difficult to get going at it.”

“I’d like to thank the farmers who have given me a chance to do their hire work and my employees.”

Eddie said that cash flow and access to finance for machinery are the biggest challenges when establishing a business of this nature.

“Whilst banks are willing to lend for capital expenditure, maintaining cash flow reserves during busy times of the year is a major difficulty.”

He said that competition is also a major challenge as there are numerous established contractors in business.

“It can be difficult to convince farmers to change to a contractor who is just starting out and may not have proven himself as well.” He added.

Eddie began farming in his own right in 2016 – the year he established E. Egan Agri-Services; he is also involved in the running of his parent’s sheep and tillage farm.

The 25-year-old is currently leasing an eighty-five-acre farm which is split between tillage and grassland; he began reseeding the holding in 2016 when the lease commenced.

For the last two years, he has purchased Friesian weanlings and sold them as stores at 16-18-months of age.

“I decided to change my system because of the struggles that the beef industry is facing.”

He buys Angus heifer weanlings and rears heifers for a local dairy farmer.

“Rearing dairy heifers for a local farmer gives me a guaranteed and continuous cash flow for the farm.”

Eddie is currently in the process of building a local base of customers within a 10-20-mile radius, with a view to expanding this over the coming years.

He has recently purchased a Lely Twin Rotor Rake and a new Disc Harrow for the coming season and may acquire an additional tractor this year.

“I think the maintenance and the upgrading of machinery are very important so I’ll be putting a big emphasis on this going forward.”

He plans to offer more services as the business continues to grow; he branched into slurry spreading in January and hopes to prove hedge-cutting services in the future.

“I’m very determined to see the business grow and want to provide farmers with a service that they can rely on and trust.”

“It’s exciting trying to build up a business and I am happy I went down this route. I don’t think an office job would have suited me anyway!” Eddie concluded.

If you are an agricultural contractor and you want to share your story, email – [email protected] – with a short bio.