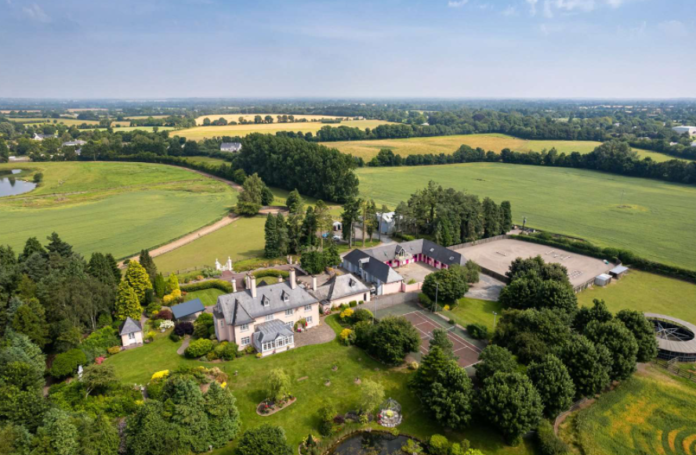 Savills has just launched Dyann House, Mountarmstrong, Donadea, Co. Kildare, to the market with a guide price of €2.25m.

James Butler has described the listing as a private residential and equestrian estate in “the heart” of County Kildare with an “accessible” location.

Constructed in 1982, Dyann House is a “magnificent” country home which has been “specifically designed” for entertaining, along with the “comforts” of modern family living.

It includes a reception hall, a triple aspect drawing room, a south-facing sun room with views of the garden, a sitting room, a spacious kitchen/breakfast room that gives access to a back hall which leads into a self-contained annex containing a boot room, storage and a kitchen/living room.

A stair provides access to a bedroom and shower room.

Off the landing on the first level are two bedrooms, a bathroom and a triple-aspect master bedroom with a fireplace, walk-in wardrobe and a spacious en suite shower room.

On the second floor are two additional bedrooms, one of which has a balcony, a sitting room and a bathroom.

Situated immediately to the east of Dyann House is a U-shaped courtyard. The wing adjacent to the house includes a pair of semi-detached self-contained apartments, each consisting of one bedroom.

The remaining two wings comprise stables and a further self-contained apartment laid out on the first floor with 2 bedrooms.

The equestrian facilities are “a key” feature of the property and include two stable yards with 18 stables and tack rooms.

Within one yard is a barn which provides useful general-purpose storage and includes a secure store.

There is a fenced lunging ring with an all-weather surface, a sand arena, an eight-horse walker and a seven-furlong gallop which surrounds the lake.

The land lies within a ring fence and extends to about 84-acres in total. It includes “productive” tillage land laid out in three principal fields of a “suitable” size for modern machinery.

There are several smaller paddocks “conveniently suited” for the stable yards, which are enclosed by stud-fencing.

The residence lies within the historic county of Kildare, famous for its world-class thoroughbreds, stud farms and racing calendar.

The busy market town of Naas (15 km) is the second largest town in Kildare, giving it a “comprehensive” range of amenities.

These include a range of supermarkets and a variety of boutique shops and retail stores. Naas is easily accessed via the N7, which connects it with Dublin and the M50.

Other reading on That’s Farming: