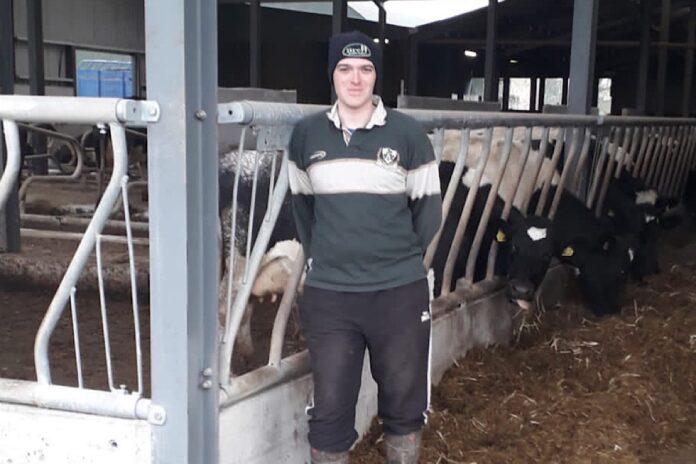 When Trevor came home from college ten years ago, he became more interested in the farm’s breeding programme. This led him to form a partnership with his father seven years ago.

The father and son team focused on dairying, having initially milked 45 cows and operated a beef and tillage enterprise.

“We did not think there was enough in the farm for two of us when I finished secondary school.” Trevor Cobbe, a Mountmellick Macra member, told That’s Farming.

“I studied architectural technology for three years in Carlow IT. I was a year or two in college when the crash came in 2009 or 2010.”

“The construction industry exploded and I came home to the farm. 2013/2014, I did my Green Cert online. Also, I completed a few days in Teagasc Grange and Teagasc Mullingar.”

“It was not really until I came home from college when I joined Dunamaise Dairy Discussion Group that things changed a little. I took more of an interest in dairy farming.”

“You could see where there was progress to be made. I have always liked the technical side of farming. Breeding programmes, trying to improve herd performance or grass measuring always interested me.”

The herd expanded “quite significantly” over the last seven years. The expansion phase began with a meeting with their Teagasc advisor, Fintan Monahan, who composed a business plan.

The family built up their herd yearly using their replacements.

“We saw lots of different breeds of cows going to discussion group meetings. For example, we saw Jersey-cross and pure Holstein Friesian-type cows.”

“None of these really fitted what we wanted. There was a couple of farmers in our discussion group early on who had pretty much what we were looking for.”

“We have a 70% Holstein Friesian and 30% British Friesian cow. So, she keeps that bit of shape but can milk, go in-calf and does everything else for you.”

“When I started breeding, it would have been very focused on EBI, and it was all about focusing on fertility. So, we did that, got our fertility figures very high, and that has worked well.”

“However, over the last couple years, I focused more on bringing up milk solids and higher protein and fat percentages; it seems to be working.”

“We did .05 better on fat protein than the year before last year, so hopefully that continues increasing.”

“We normally feed 800kgs of meal. However, we fed closer to 1t last year because we had a couple of very dry spells of weather.”

“Our ground would be very dry, and any time we get hot weather like that, we struggle.”

“However, in saying that, our milk solids are nicely up, so maybe it paid off in a good milk price year.” 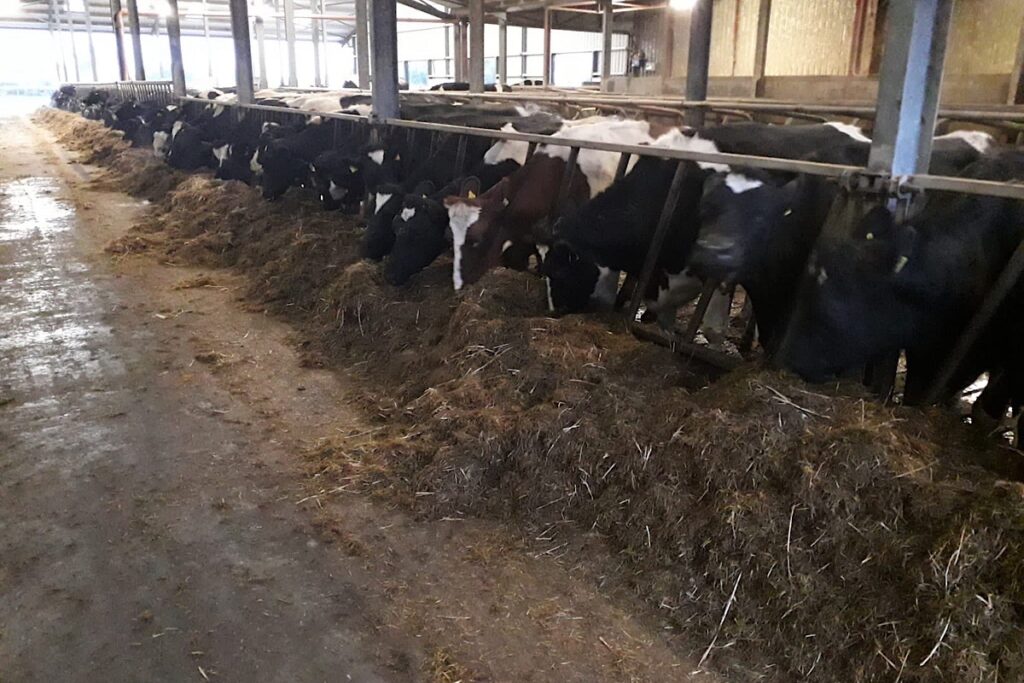 The father and son duo AI their heifers and cows over twelve weeks.

They tail paint cows for heat detection and use a Holstein Friesian vasectomised bull and scratch cards on heifers.

“We found when heifers were starting to come into heat when there was a big bunch of heifers, the bull was not fit to pick them all up.”

“I am picky enough when I choose my bulls. They have to be pedigree and over a certain amount of fertility. The last few years, I have been trying to keep protein and fat percentages up too.”

“It seems to have worked. I did not have any problems in picking out the numbers I wanted.”

“We used a couple of sexed semen straws the first year they brought it out. We only got on middling.”

“To be honest, it is nearly more important cows are in-calf early, calf down and start milking.”

“I know some years you have more bull calves than heifers. However, you generally find it is around 50:50. It is not like we are building up our herd anymore as our numbers are static.”

The father and son calf their herd from January 24th over nine weeks. Their herd has a 90% 6-week calving rate figure and a 370-day calving interval.

“It is the most profitable time to calf. You can dry off in November or December and have cows dry when they cannot be out.”

“The whole idea is to have them out once they are calved and milking off it [grass] because that is how they do best.”

“For us, two-year-old is the age that works, and it is not like we do autumn-calving.”

“You will not get them at two-and-a-half years old, and three years old is too old. It just does not work. So, we are well fit to get them to that size at two-year-old.”

The family retain 35 heifers each year, selling the remainder on-farm after scanning in October.

They use calf weight bands to identify daily weight gains.

Trevor and his family sell the male progeny at 4-6 weeks old on-farm with five bulls going for breeding as calves last year.

“There seem to be more farmers out there looking to buy bulls in that way. They find to buy stock bulls at breeding age is getting very expensive.”

“So, to buy them as calves as long as you have the backup of genomically testing is a cheaper way of getting into a bit of quality.” 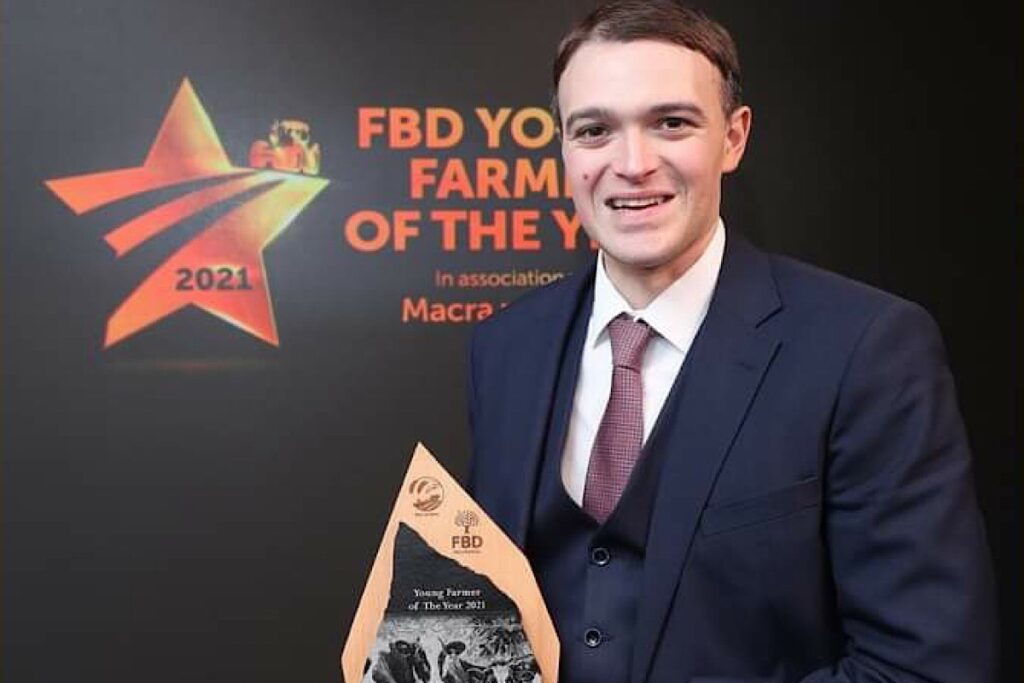 Trevor said he was slow to implement a grass measuring policy but sees the benefits now.

“We increased the grass we were growing from 11T to around 14T, which is a massive difference. So, rather than having to feed meal, you are able to grow with grass which costs less.”

In 1994, the Cobbe family built their 4-unit Pearson milking parlour, later extending it to a 6-unit.

The parlour’s latest 2015 extension means it is now a 12-unit milking parlour with automatic cluster removers.

“When we are at full grass, milking takes two-and-a-quarter hours in the morning and two hours in the evening.”

“The parlour is getting near the top of the list for being improved. However, whether we are fit to extend it or go for greenfield, we do not know yet.”

“It is hard for me to say without knowing what is coming down the line with TAMS grants.”

Other farm infrastructures include a 130-cubicle-cow shed, a slatted shed for heifers with four pens, a calf shed (fitted with a JFC Evolution calf feeder) and two silage pits.

“Sometimes we are a bit unfairly put under the gun, being the fault for everything in farming. I do not think that is the case.”

“However, I know there are ways we can all do better. I definitely think getting the word out there that farmers do look after the environment and land is a good message to get out there.”

The Laois farmer said he is willing to embrace some new environmental measures.

“While I think some of the things been talked about are quite unreasonable, I think a lot of things with the new eco-schemes; there is no great harm what is being proposed.”

The family have reached their goals of a 120-cow herd with no expansion plans.

According to Trevor, the family are getting one step closer each year to putting a bull into an AI station.

In addition, they plan to reseed 10% of grassland annually, use multispecies swards, improve farm infrastructure and qualify for their first IHFA herd’s competition.

“I still think things should be good. There is a massive demand out there for dairy products, and as milk prices will tell you, people want dairy all over the world.”

“If we keep a bit of sense in our politicians and decision-makers, they should see dairy is very important to the country in terms of jobs and exports. So, it pays everyone to try to keep it right.”

“Farming, in general, is being made a bit of a scapegoat. If you look at the aviation industry and other big businesses, they seem to be able to get away with whatever they want.”

“A bit of common sense needs to be brought to the table and not to be making kneejerk decisions. There is research going on, looking at ways to reduce emissions in agriculture.”

“Either research should have been done ten years ago, and rules being made now, or research undertaken now and the rules in 5-10 years, it seemed to all come at the one time.”

“So, in my opinion, they are making decisions now without having the full picture on the technical side,” the owner of Doolagh Farm concluded.