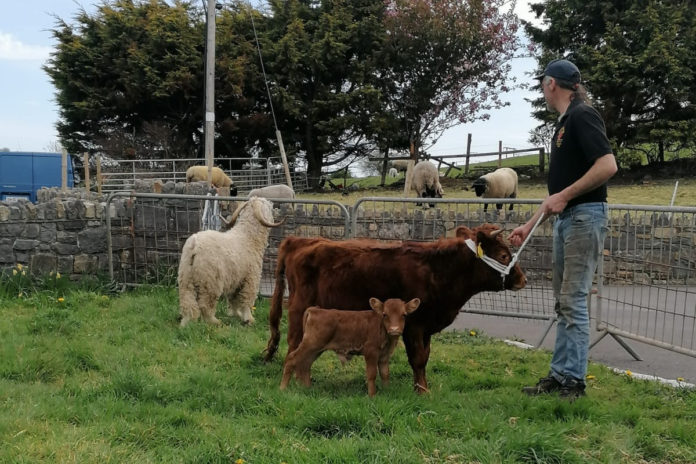 James Vance from Ballinatra, Co. Donegal, has reared a Dexter cow that he believes could become the world’s smallest cow.

The cow is from the same bloodline as Ella, the current record holder for being the smallest cow in the world, and he estimates that they are of a similar size.

When she was born, he did not think she was going to be any different from the rest of his herd.

“She was a fair size calf when she was born actually, a good size for a Dexter anyway, but she never really grew and that never really bothered me.”

“We have no way of weighing her, but she’s around 30 to 35 inches in height,” he explained.

The mixed farmer is unsure as to whether he will get in contact with Guinness about verifying if it is a world record due to the current circumstances.

He explained: “The way things are at the minute, it probably couldn’t have happened at a worse time. Maybe if things soften a little bit we will.”

This mixed farm has been home to Dexter cattle for a number of years now, originally starting as a hobby but in recent times, the Donegal farmer has decided to begin Dexter beef production.

He plans to sell his firs cuts of Dexter beef this week and said that the speed of processing the animal is a huge advantage to the system.

“The bullock walked onto the trailer here at the farm, I drove it to the abattoir and half-way back the road I got a phone call to say it was ready. I think it was 7 minutes from field to finish.”

“From a farmer’s point of view, there was no stress or anything. You don’t get much quicker than that.”

“We brought one animal to see how it goes but we have another one here that might go next week or the week after.”

The carcass has been hanging for over 2 weeks and will soon be going for butchering in Walsh’s Butchers in Donegal Town, who’s business is centred around selling local meat.

The ease of management and low inputs makes the system economically efficient. James hopes to continue the beef production in the future and cannot see himself changing to a larger animal anytime soon.

“They’re a great animal. I would say there will be a lot more people getting involved with these small animals. I can see the benefits of having them over the bigger cattle,” he explained.

“I don’t have to put them in, they’re hardy. The bull that I finished never got one antibiotic, he was only dosed once and was in the field for the last 12 months. There’s no meal bill or anything like that either.” he concluded.

- Advertisement -
Previous article8.4 million illegal cigarettes found in pallets of frozen chicken
Next article‘I am so excited to get out and get practicing as a vet’