In this week’s dairy segment, That’s Farming, speaks to Joe and Kevin Doran of Dondale Farm. They discuss grading their cows up to pedigree, producing 700kgs of milk solids, heat detection systems, split calving, and their achievements.

The enterprise consists of 200-acres with 30-acres of maize and the remainder in grassland.

In 1991, the Dorans established their pedigree Holstein Friesian herd from pedigree heifers from commercial cows on the holding when they purchased the farm.

They graded up to pedigrees and added in their own original females.

The family continues to invest in bloodlines from numerous prolific breeders in the country and breed 95% of their own females.

“My grandfather moved here in 1964, and he was here first, and then my father, Joe,” his son, Kevin Doran, who studied a Teagasc Level 6 Stud Farm Management Course at Kildalton Agriculture College from 2009-2010, told That’s Farming.

“I always did a few bits and pieces of work on the farm. I was away from the farm for several years working with thoroughbred horses.”

“Furthermore, I worked on different stud farms. I spent some time completing a few sales and working part-time on the farm.”

“The job brought me to Australia, New Zealand, America, France, and a few sales in England. I have been working at home full-time for six or eight years.”

“We chose the Holstein Friesian breed because of their better milk production and more return from feed.”

“The herd would have originally been Friesian-cross Shorthorns with my father, and that is where he started,” Joe added.

“We bred up Friesian cows, and when the Holstein Friesian came in, we switched towards them.”

“It was originally to get more production, more size. Then, we went full Holstein Friesian and started registering to grade them up as pedigrees.”

The Dorans mainly use AI, which includes a mixture of sexed semen and conventional straws.

They mop up with a Holstein Friesian stock bull or use AI Belgian Blue sires.

“We used a good bit of sexed semen and had good success over the last number of years. We have had too many heifer calves, so we will be putting some on the market later this year.”

“Also, we get World Wide Sires Limited to do a breeding programme with us, and we select five or six bulls and use them for the breeding season and have a specific mating programme for all the cows.”

The farm invested in a Cow Manager system in December 2021 to monitor their autumn-calving herd’s health and fertility.

“It has worked well for us. We have 60% conception rates for the first service since we started using that, and that included a lot of sexed semen straws too.”

The family calf 30% of the herd in autumn and the remainder of cows in spring. According to the family, the herd has a 390-day calving interval.

“We have two short calving seasons from early February to the end of April and early October to the middle of December.”

“We have a decent liquid milk contract, so it suits us to milk right through the year. Also, the cow type we have will continue to milk, so feeding during the winter is no issue for us.”

“We usually check cows calving late in the evening between us, and I watch them overnight. My father checks them first thing in the morning.”

The family outlined why they aim for heifers to calf at 24-months.

“I try to calf them around 24-months, so they are not carrying over from spring to autumn or autumn to spring.”

“They are more profitable when they are milking early and once they are mature enough. We have no issue calving them at two-year-old.”

The family’s low intervention at calving is due to Murray, who draws up a plan for the cow’s diets and works independently with the family.

The father and son team retain 35-40 replacements, sell some bull calves at 2-weeks-old in Carlow Mart and sell the remainder on-farm for breeding.

“I have 40 heifer calves on the ground this spring, so I will have some to sell towards the end of the year.”

“We have always kept heifers up until now, and this year will be our first year selling a few heifers.”

The family advocates a strict culling policy for cows that develop mastitis or show signs of lameness. 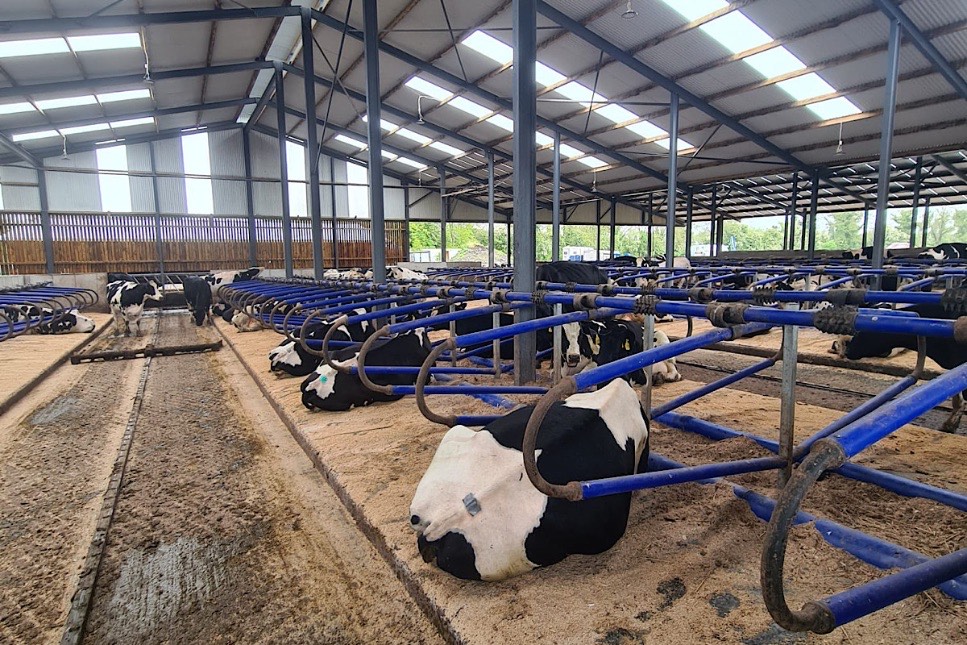 The family aims to grow as much grass and utilise it as much as possible.

“We are not afraid to feed; if a cow needs feeding, we will feed them. So, you get a great return from a Holstein Friesian cow, in that way, and if you feed them, they will respond.”

“There is no point trying to cut them back too much as it will only punish the cow.”

The Kildare family milk in a 16-unit DeLaval milking parlour and installed this in 2002. It takes them two-and-a-half hours, and this occurs twice-a-day.

“We have ten rows going through it now, but if there were any more cows, then we would have to upgrade. However, at the minute, we will be staying with what we have got.”

Other infrastructure include a 200-cow cubicle shed, a multi-purpose calving shed (including feed storage) and a calf shed split into five groups and nineteen pens. 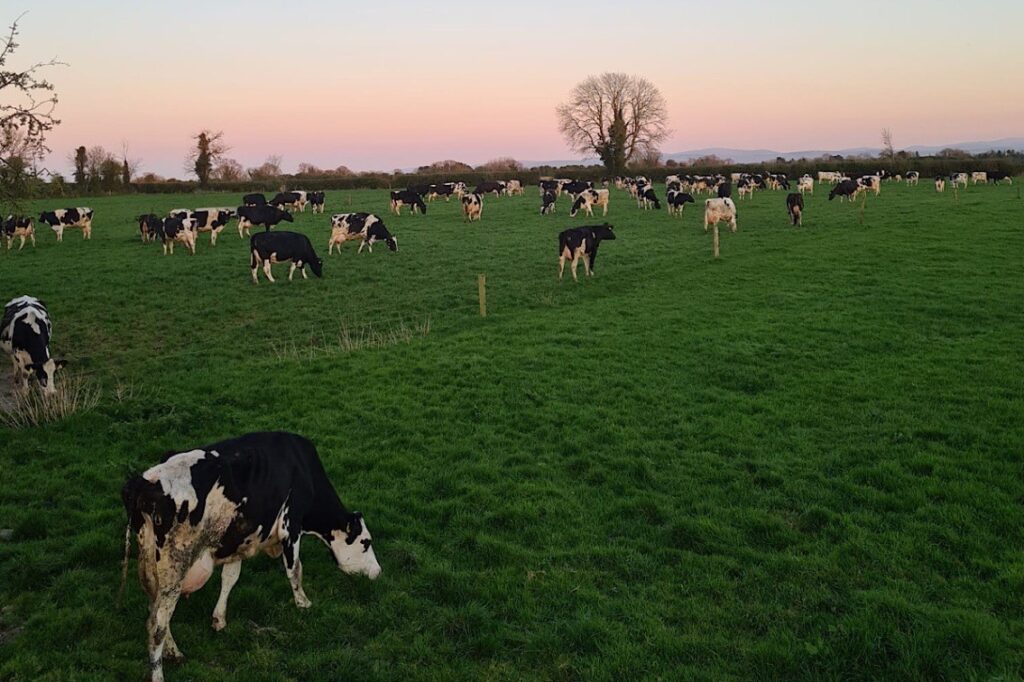 Both father and son are involved with the Irish Holstein Friesian Association.

“A couple of our cows that did over 3,000kgs of protein have won IHFA diamond and gold awards. We had a diamond award last year, and we had another gold award for the Emblem cow family the previous year.”

The family face rising input costs and environmental-related challenges in the sector.

“We have been utilising our slurry all spring and are using a dribble bar. We have some of the farms spread with slurry this year and are hoping to utilise slurry better to cut down on fertiliser costs.”

“My biggest challenge would be the environment, whether it is the changes or restrictions going forward.”

“Farmers are going to have a lot of hoops to jump through, and a lot of them probably will not make a difference.”

“We are wrongly getting a lot of the blame for climate change in Ireland. I think we are going to have a lot more restrictions and costs on farmers going forward.”

“A lot of farmers have already adapted and have been adapting for a number of years, and there is no facility there to credit farmers.”

“So, it is usually to penalise if you have done something rather than getting credit for what you have done or already have there.”

The family intends to milk 160 cows by next summer, which will be their maximum number of livestock for the land base available.

“We have rented a farm next door to us for the last twenty years. We managed to buy it last year when it came up for sale. So, we have slowly expanded with our extra followers over the last number of years.”

“I am looking at doing more on the farm, and my father, Joe, is looking at stepping back slowly.”

“In my opinion, if people are enthusiastic and willing to work and put in the hard yards, there is definitely a future there.

“I think the better farmers will always survive and push through no matter what happens. We are certainly hoping to be one of the better ones and stay in the game.”

“In my view, milk prices will continue at a good level this year, and after that, it is hard to know; it all depends on what is happening around the world.”

“It is fairly volatile at the minute, and it is hard to know what way anything will go, but if milk prices drop, there will be a lot less milk around and a lot of farmers in a lot of trouble with input costs,” the dairy farmer concluded.