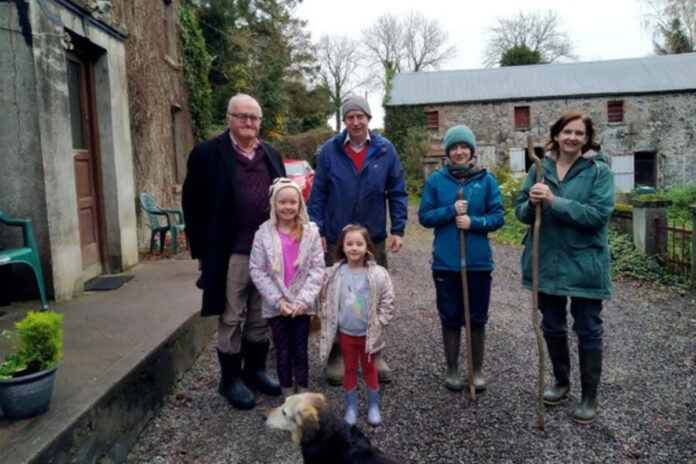 Farm diversification and respect for nature paying dividends in Monaghan

In this article, Dermot McNally explains how on farm diversification and respect for nature are paying dividends on one Monaghan-based enterprise.

The Barker home place near Derryvalley, Co. Monaghan is enjoying a wonderful renaissance under the thoughtful stewardship of owner (and well-known toastmaster) Charlie Barker.

There are those who will paint the ‘olden days of rural Ireland’ in rosy images. However, Charlie is the first to admit that the farming life he knew in childhood was often “tough and unrewarding”.

Little wonder then that his mother ensured he would get an education. And so, he ended up having an enjoyable career in nursing for over thirty years

With the demands of a full-time job in nursing and a family to raise, his 30 odd acre farm at Derryvalley was sometimes more of an afterthought.

It was a matter of keeping things ticking over. However, since retiring from nursing, he has started to take a different approach to how he farms the operation.

Involvement in various GLAS schemes and their forerunners over the years gave Charlie a chance to enhance the natural surroundings on the farm without having to intensify production: this suited his plans.

He implemented measures such as fencing off waterways, planting fruit trees, erecting bat boxes and similar. With an eye to those who will come after him, Charlie’s next major step was to plant an oak hardwood in a slanting field.

The trees are “growing strongly” and he has had no unwanted deer browsing in the formative years which is vital.

He is starting to think about tree pruning. He expects a thinning operation will probably be needed in the next 7 to 8 years.

His livestock farming is low intensity, and he has moved to Dexter cattle. This is a small hardy breed that he can out winter (without poaching the ground). Furthermore, they require little in the way of bought-in feeds to keep them healthy.

He has little need of dosing or vets and cattle are docile enough for Charlie’s two grandchildren, Anna and Ella Trappe to feed.

An interesting feature of the farm, and one which adds immensely to the natural amenity value, is the low-lying area to the front of the farmhouse through, which runs a small tributary to the Dromore Waterway.

The area along the stream was typically wet and hard to farm and the likes of hazel, ash, holly and all the native trees sprouted up naturally.

Now that these trees and some towering conifers have matured, they create a wonderful canopy as you walk across the bridge and along the stream towards the young oak plantation.

Passing the oak, you enter into a mature copse of hybrid poplar trees that has a stunning array of bluebells in the spring. You can loop over the top of the plantation and back towards the house along the stream.

The farm is full of the flora and fauna you would expect in a thriving ecosystem and even crayfish have been spotted in the waters.

Running adjacent to the stream are the remnants of a mill race. Charlie pointed out the earthen banks in a low-lying field that acted to dam water in.

This field was flooded back in the era when flax production was at it is height.

A weir was in operation at the mouth of the field and water released through a mill race when the force of flowing water was needed to power the mill further downstream.

It was interesting to note that the mill owner possessed a ‘lean’ or legal right to flood the field. The farm owners were powerless to stop it, nor did they earn anything from the flooding.

Charlie is a fountain of knowledge on farming traditions. He is an entertaining host keeping us all interested with anecdotes and insight.

And when Charlie was taking a breather from talking the gap was neatly filled by his grandkids, the knowledgeable and enthusiastic, Anna and Ella Trappe, who had stories on badgers, foxes and all manner of chicken and Dexter escapades.

Back nearer the house the old traditional stone barns and byre have been maintained effectively. They give great character to the farmyard to the front of the old farmhouse.

Diversification on farm: Air B and B

With all these wonderful natural features and old-world charm, Charlie came up with the idea to share it with a wider audience by offering accommodation (through Air B and B) in a self-contained flat in the farmhouse.

The accommodation is only up and running a few years. Since then, he has had hundreds of visitors from all over the world.

An incredible 164 visitors have taken the time to rate his overall service on AirBnB at 4.98 out of 5 winning him the prestigious title of Superhost.

These personal testimonies to Charlie’s Cead Míle Fáilte and the wonderful natural setting are uplifting to read. A hugely successful example of farm diversification on our doorstep.

Dermot McNally is a forest owner, an active member of Transition Monaghan and also writes at www.dermymcnally.com