That's FarmingThat\'s Farming Irelands Largest Farming News, Properties and Classifieds Network
HomeEditor's Picks‘It is a viable business if you are willing to do the... 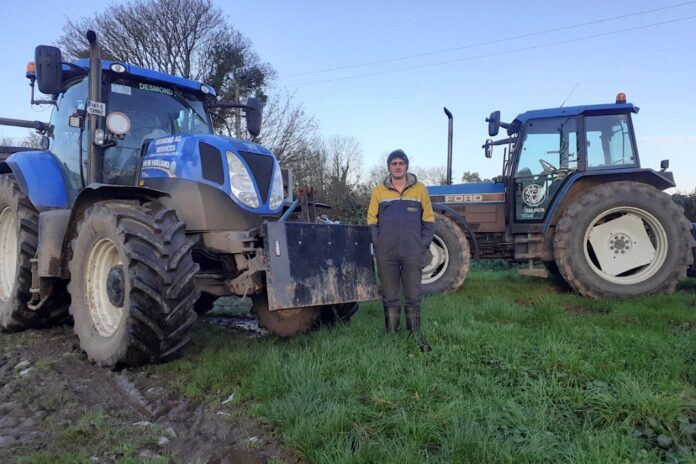 Desmond Ag Services has been in the agricultural contracting field for over fifteen years.

Niall Desmond established the firm when identified a niche in the market for a silage baling service in Glanworth in Cork.

He viewed this as a potential business opportunity and invested in a Ford 8240 tractor and a Krone 1250 baler.

“I was mad about machinery since I was young. So, I went out working for an agricultural contractor, Aaron Gleeson, in a town called Warrenville, three hours from Melbourne, after I finished college,”   his son, David, a Salesian Agricultural College graduate, told That’s Farming.

“I did two seasons with him at silage, drilling, and at cultivating work.”

Around three years ago, his son, David, joined forces with him and established a fertiliser and reseeding service, which was the result of an overseas trip which inspired him to add more services to the business.

In addition, Niall farms 35 Charolais-cross, Hereford-cross, and Friesian-cross suckler cows and up to 33-acres of spring barley.

The father and son team work full-time in spring/summer. David’s father is part-time in autumn and full-time on his farm in winter, and a neighbouring farmer employs David during the firm’s quieter periods.

In addition, David’s sisters, Orla and Maeve, and brothers, Gearoid and Fionn, work as operators in the business during the peak times.

Desmond Ag Services serves customers nearby Glanworth, with other contracts within a 10-mile radius.

Through the years, he and his father built up customers through word of mouth. David executed digital media campaigns three years ago to promote the introduction of fertiliser spreading and reseeding.

“We try to keep the standard of service as high as we can. For example, we try to draw bales as we make them as we do not like leaving them out in a field overnight.”

“Most of our clients are repeat customers. I suppose the last few years with the fertiliser spreading, we got a few new customers but so far, so good, and we seem to be holding onto the new jobs. All our silage jobs would be repeat customers.”

Baling occupies them from the middle of June, cutting strong paddocks for silage until second-cut silage, running into September.

From September to December, David draws potatoes with a neighbouring farmer, hauls bales, some reseeding and stitches grass.

“When farmers have paddocks to cut, they want you to reseed them when the grass is right, and they want to get it done as fast as they can, get it in and growing again for cows.”

Most repairs they conduct in-house with a mechanic looking after any “major” issues and Nunan Farm Machinery, Broadford, County Limerick, repairing their baler.

Other machinery items include a McHale Fusion 2 round baler wrapper, a Krone rake, a Kuhn Power Harrow and Accord Seed Drill Combination, a disc harrow and an A1 Engineering land leveller.

Challenges impacting the business include the long hours associated with the industry and diesel prices.

“We had to put our prices up for silage and other services. So, I suppose everything went up, and we had to increase our rates to compensate for everything going up in price.”

“I know it is a big expense putting our prices up, but milk prices went up, compensating for dairy farmers.”

“I believe the key elements of running a successful agricultural contracting business are showing up to the farmer when you say you will keep in contact if things are not going to plan to let them know you are running late.”

“Then, I also believe in doing as best job and doing what you say you are going to and not taking shortcuts.”

David offered advice to aspiring agricultural contractors entering the field. He advised people to keep on top of bills with rising input costs and said, “costs do not be long creeping up”.

The father and son intend to focus on fertiliser spreading and reseeding as they feel these services will garner popularity, especially on the direct drilling aspect.

“I think there will always be a need for an agricultural contractor as farmers are getting bigger and do not have time to do the small jobs, they used to a couple of years ago.”