That's FarmingThat\'s Farming Irelands Largest Farming News, Properties and Classifieds Network
HomeBeef‘If you are good at your job and produce a good quality... 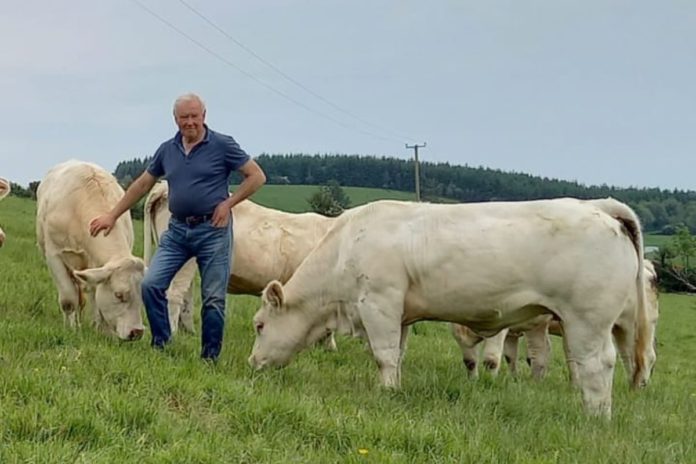 ‘If you are good at your job and produce a good quality animal, you will get paid for it’

In this week’s Suckler Focus, That’s Farming, speaks to Basil Bothwell about his renowned Dereskit Charolais herd in County Cavan.

The third-generation farmer runs the Dereskit pedigree Charolais herd on a 65-acre block of land, an out-farm of 80-acres and a 7-acre rented parcel of land.

“I was always keen to farm from when I could put little wellies on my feet. I grew up with pedigree cattle all of my life and always had a great interest in them,” Basil Bothwell told That’s Farming.

“My grandfather on my mother’s side would have bred Herefords for many years, as did my father. Then, we branched into Charolais in 1974, and we are breeding Charolais since. I bought some Limousins in 1985.”

Today, he keeps a 33-cow pedigree Charolais herd and a 7-cow Limousin herd. However, in recent years, he has decreased cow numbers from an initial 55.

“I always had a great love for the Charolais. Originally, we had a suckling herd, and as years went on, by breeding pedigrees and keeping heifers, we squeezed out the commercial sucklers.”

“My father and I bought the first cow in 1974, and we worked from there. After that, we bought a few more, and I took over the farm in 1980 and continued with the herd we had started.”

“We still have our best breeding stock going back to the first cow we bought in 1974, a Shamrock Ambassador cow.”

Furthermore, Basil’s farm system involves retaining some heifers and selling surplus as breeding stock. On the other hand, he sells all bulls from the farm – except for his three youngest. He offers these for sale at the Charolais Christmas cracker or other Irish Charolais Cattle Society sales.

“Over the last few years, my on-farm sales have increased. So I get many enquiries without advertising.”

‘“A lot are from people who have bought before off me or know of me. They come to look and see what I have, and if we deal, we deal.”

“I sell nearly all of my bulls for breeding. Occasionally, we might have to slaughter one or two of them if something happened them or if they sustained an injury.”

“I had a bull that was supreme champion at the Charolais Christmas Cracker and he to a pedigree breeder in Scotland. His progeny went on to win some of the major shows in Scotland, e.g. the Royal Highland Show.”

Furthermore, Basil commented that he calves 30 of his females in autumn, whilst the remaining females are spring-calvers.

“When I was calving 50 cows, we broke it up between spring and autumn calving. If you have so many cows calving at the one time, you need so many calving pens, so it suited to break the calving up.”

“Also, there are always people looking for bulls at different times, so having a different range of ages always helps.” 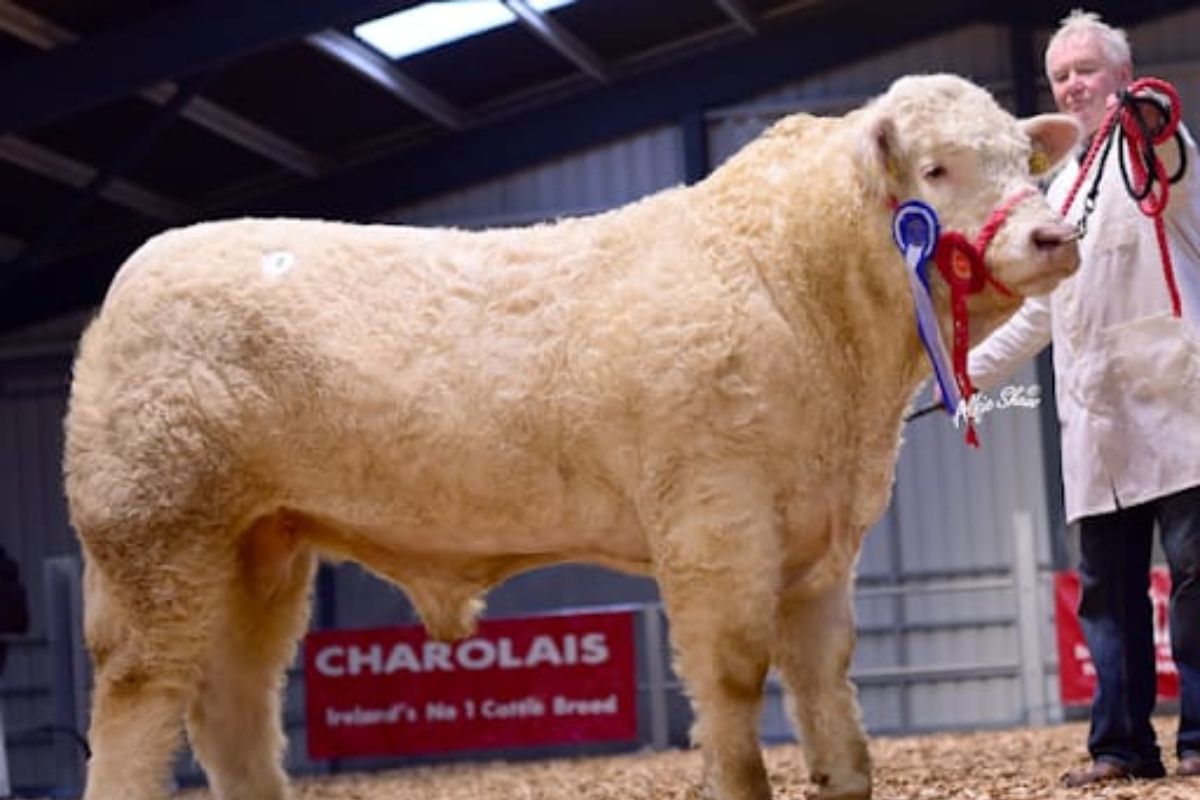 According to Basil, the farm has a 50:50 breeding system comprising both AI and stock bull use.

“I tend to use quite a bit of AI when the cows are in during the winter. When the cows go out to grass, I let the bull off with them as it is much easier to get them in-calf.”

“I would be using some of the bulls that the Irish Charolais Cattle Society would be bringing in, some of the top bulls in France and some that are doing well in AI here.”

“I would be using particular bulls on different cows. For example, if I have a very good cow that I want to keep a daughter of, I will use a more a maternal-type of bull which will leave me milk in her.”

“Whereas if I had a cow that I would not be inclined to keep daughters of, I use a terminal bull on her, and if she has a bull calf, I will sell it. If she has a heifer calf and it is not up to standard, I will bring her to the weanling sales.”

Basil became a pedigree Charolais breeder after witnessing first-hand the breed’s abilities in a commercial capacity.

“We bought some cross-bred Charolais calves to double-suckle on the cows, and we saw the tremendous growth rate and confirmation they had. We were very brawled to them by that.”

“In 1971, we bought our first Charolais bull and really loved the progeny and then decided to buy a female, and that is where it all started.”

“I remember the first Charolais bull calf I bought myself when I was 10. I reared him on a bucket, and he made a tremendous calf. But, I went out one morning and found him dead in the field; it did not put me off; I kept going.”

Standing the test of time

The Cavan native stated that the Charolais breed has stood the test of time, and crossbreds consistently command “top prices” in livestock marts.

“Occasionally, other breeds have taken the limelight for a short while. However, tbuyers always seem to go back to he Charolais. I think Charolais cattle have proven themselves long over the years.”

“All the other breeds are trying to compete against the Charolais. You can sell a Charolais at any time; as a suck calf, a weanling, or a store.”

Basil outlined what he seeks in breeding females. “I like a bit of size and length in my cow. I like a cow that is good on its legs and a nice head. I do not want her too muscley; a good R+ or a U- at the most.”

“If you have extremely muscley cows, you tend to have more problems with calving and less milk. So over the years, I concentrated on trying to retain milk in my cows.”

Basil stated that one of the best cows he ever had in the herd was Dereskit Rosetta which achieved him three national winners and a top-performing bull; she passed away at 18 years of age.

“I still have 14 or 15 of her embryos processing, and we had a few natural calves from her. I have six or seven of her daughter retained in the herd as well.”

At the age of 64, Basil believes the key to success in suckling is maintaining a good quality cow and bull in the herd, turning out good weanlings, and obtaining a reasonable return forn the farmer.

“She [the cow] has to produce a calf once a year; calving interval is very important. So if you have a cow and she only has a calf once every fourteen or fifteen months, she is not making you money.”

“On the other hand, if you have a cow that has a calf every 12 months and raises that calf, you are getting around €1,000 for the calf; that cow is leaving a bit of money.”

“I think suckler farmers need to keep that in their minds; you need decent quality cattle. If you are good at your job and produce a good quality animal, you will get paid for it.”

“I see some people coming out with poor quality cattle and getting €600 and €700 for weanlings; they are not making anything; they are only surviving.”

The owner of Dereskit Charolais hopes suckler farming in Ireland will continue.

“I would be concerned what some people are suggesting that we should reduce our national herd by 50%. Honestly, I think that will be devastating for suckler farming and Ireland.”

“I cannot see any sense in it why we should reduce and maybe import beef from South America; it does not make sense to me. I think our suckler farmers have very good quality cattle, and I hope that suckler farmers will have a future in Ireland.”

Looking ahead, Basil intends to scale back cows numbers to 30 and improve the farm’s infrastructure, whilst continuing his role with ICBF.

“I enjoy meeting people and seeing their stock. I love looking at animals and cattle. It is a break away from the farm; farming can be quite isolating.”

“It is nice to meet other people and see what other people are doing. I have made many friends over the years through the Irish Charolais Cattle Society, breeding and scoring.”

In addition, he plans to return to the show circuit after the Covid-19 pandemic, having experienced tremendous success up until 2013.

- Advertisement -
Previous article
Tractor rolls over onto car
Next article
VIDEO: New CLAAS Jaguar 990 out in force for ‘Silage 2021’