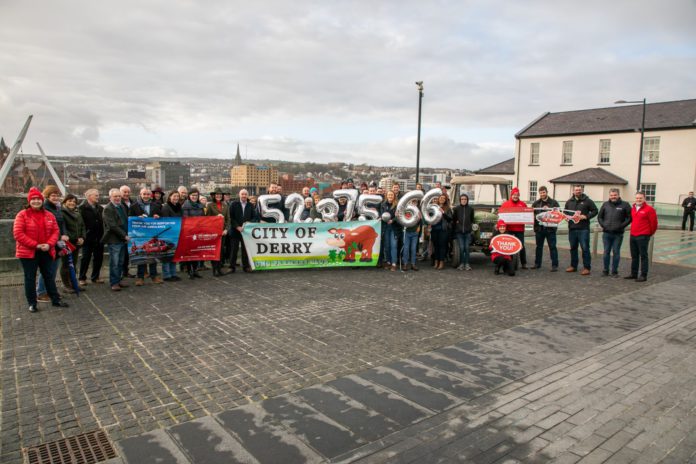 The City of Derry Young Farmers’ Club has fundraised for Air Ambulance Northern Ireland in memory of the late David Crockett, who was killed in a farm accident in June 2020.

The club – which has just celebrated its 60th-anniversary activity – secured a unique 60-year-old Fendt tractor all the way from Germany.

It formed top prize in an auction, which Richard Beatie led and Mart Eye hosted in October 2021.

The club handed over £52,442.66 to Air Ambulance NI, contributing to its £2 million annual fundraising need and funding almost ten days.

Before the auction, the club organised a family fun day during which they used the 60-year-old tractor in a 24-hour plough.

Members took turns to plough through the night and day, and then a modern-day

They used the Fendt to plough the same area in less than an hour.

A club member said: “The activity was two years in the planning; we wanted to do something different.”

“Furthermore, we have been able to present £52,442.66 to the air ambulance charity. It is wonderful that this will give the best chance to future patients.”

“None of us know when we might need it. In the farming community, we know that more than most.”

A group of fifty people representing club members, previous members, sponsors and supporters gathered in Ebrington Square, Derry. They presented the charity with the funds and acknowledge the “incredible” support.

Ian Crowe, a native of Derry and Trustee of Air Ambulance NI, said:

“The club’s activity in memory of David Crockett illustrates how well thought of he was and how much the local community misses him.”

“We are in awe at the result of the City of Derry Young Farmers Club efforts. This fundraising idea was so unique.”

“We admire the lengths that the club went to in securing the tractor, organising the 24-hour plough, family fun event and the auction.”

Therefore, 20 patients will benefit from “exemplary” pre-hospital care at the scene of an accident or critical medical emergency.

“We thank everyone in the club and all of their sponsors, prize donors and all of the community who helped to make this possible.”

It can get anywhere in Northern Ireland in approximately twenty-five minutes. From inception to December 2021, the medical crew have been tasked 2,679 times.

The HEMS team attend patients who are seriously ill or injured, bringing emergency pre-hospital care direct to the casualty. It aims to save lives, brains and limbs.

Air Ambulance NI aspires to raise £2 million each year to maintain and sustain this service, so public support is “crucial”.

- Advertisement -
Previous articleOpinion: Leaving Cert exams-only format ‘totally unacceptable’
Next article10 ways to exercise with your dog when it’s too cold for walks