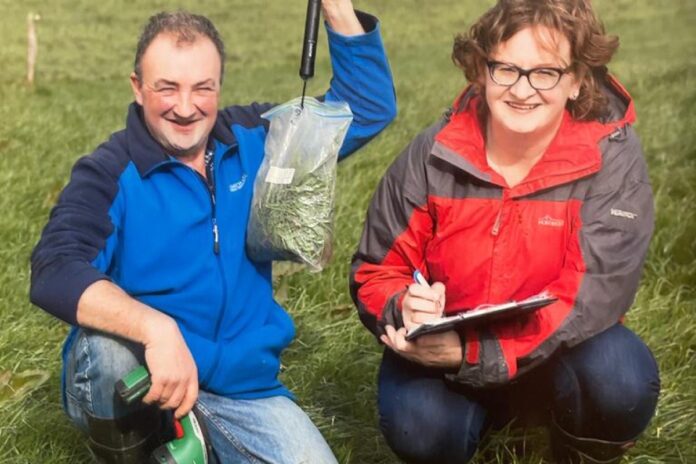 In this week’s dairy series, That’s Farming, speaks to Marguerite Crowley. She discusses marrying into the farming lifestyle, breed choice, sexed semen, women in agriculture and the future of Irish dairy farming.

Michael and Marguerite Crowley farm just outside Skibbereen, County Cork, where they milk 160 cows, own 80-acres, and lease a further 128-acres of land.

Many years ago, Michael’s grandfather, Mick, established the farm. In 1990, Marguerite and Michael met in London when she was on holiday from college, and he was working on building sites.

In 1994, his father, Paddy, required an operation, and Michael came home to take over the farm, which then milked 30 cows and later leased four additional farms.

Marguerite hails from Baltimore, a twenty-minute drive from the farm, and her parents, Jeremiah, and Marguerite, owned a guesthouse, and her father worked as a builder.

The husband-and-wife team carry out the farm’s day-to-day running, and with two family members also involved, they plan to become the fourth generation to take the enterprise’s reins.

“I did not know he was a farmer when I started going out with him; it was only a couple of weeks later I found out he was farming. We married in 1995 and had five children with only six years between them,” Marguerite Crowley told That’s Farming.

“So, I had no time to go out on the farm when the children were younger. We only had 60 or 70 cows, so Michael managed them well with his father giving him a hand.”

“However, once the kids got older and we got to 140 or 150 cows, Michael needed someone outside, so I enjoyed going out and helping him; it was a break from the kids and housework.”

“I love farming and the animals, and milking is my main thing; I love milking.”

Friesian was the choice of the breed on the farm, but following a visit to New Zealand in 2007, Michael decided to crossbreed to Jersey and now breeds Friesian cows to Jersey and Jersey cows to Friesian.

They chose Jersey-cross cows because of some lameness issues previously, and because of its milk solid figures.

Their preferred cow goes in-calf annually, can walk long distances due to the milking parlour being 1km from the grazing platform, has a high health status and a “good” temperament.

According to the husband and wife, cows currently receive 3kgs of concentrates in the milking parlour and were fed 830kgs per cow as the total figure last year.

According to the reports, the herd’s EBI stands at €220. The husband and wife were runners-up in the NDC & Kerrygold Quality Milk Awards 2017; the year before, they won West Cork Dairy Farmers of the Year, Carbery Milk Quality Award Winners, and Winners at the NDC/Kerrygold National Milk Quality Awards.

In addition, they are very involved with The National Dairy Council (NDC) and Ornua and feature in videos promoting Kerrygold butter and Dubliner cheese.

Michael is a DIY AI technician and undertakes conventional AI on the herd from May 1st to July 1st before introducing a Friesian-Holstein-Jersey stock bull after eight weeks.

According to the husband and wife, most cows go in-calf on the second round, and AI’ing ceases around July 1st to switch to stock bull use.

“Michael tried sexed semen three years ago, but I do not know if we will do it next year. In my opinion, the AI straws are expensive, and there is no guarantee the cow will stay in-calf to that. We are lucky enough as we always end up 50/50 with heifers and bulls. “

“In my opinion, in the last two years, the genetic pool has become better; up to that, it was tough as you were using the same sires year after year.”

Most of the herd calves in six weeks, with cows calving from February to the end of April, as they find grass does not grow to satisfactory levels until February. They wanted to ensure the grass is available when cows calf as they run a grass-based system.

They feel the benefits are it is “better” for the cow, involves “less” of a workload for themselves and is a more economical way of farming.

The husband and wife team calve most heifers before they reach two-years-old, a strategy which they believe gives rise to “more” mature, placid and manageable cow in the milking parlour.

They monitor cows through an Eyewatch Technologies’ calving camera in a straw-bedded shed with room for up to 12 cows and carry out regular checks.

According to the family, cows require very “little” calving intervention, and the herd’s calving interval sits at 366 days and has a 90% 6-week calving rate.

The husband and wife retain their replacement heifers, sell excess heifers privately and put bull calves through the ring at Cork Co-operative Marts’ Skibbereen branch when they are under six-weeks-old, having previously exported them.

Michael walks the farm every Monday morning, bases their week’s grazing plan decisions on this and uses the PastureBase Ireland app, recording a growth of 14.2 tonnes of grass in 2021. 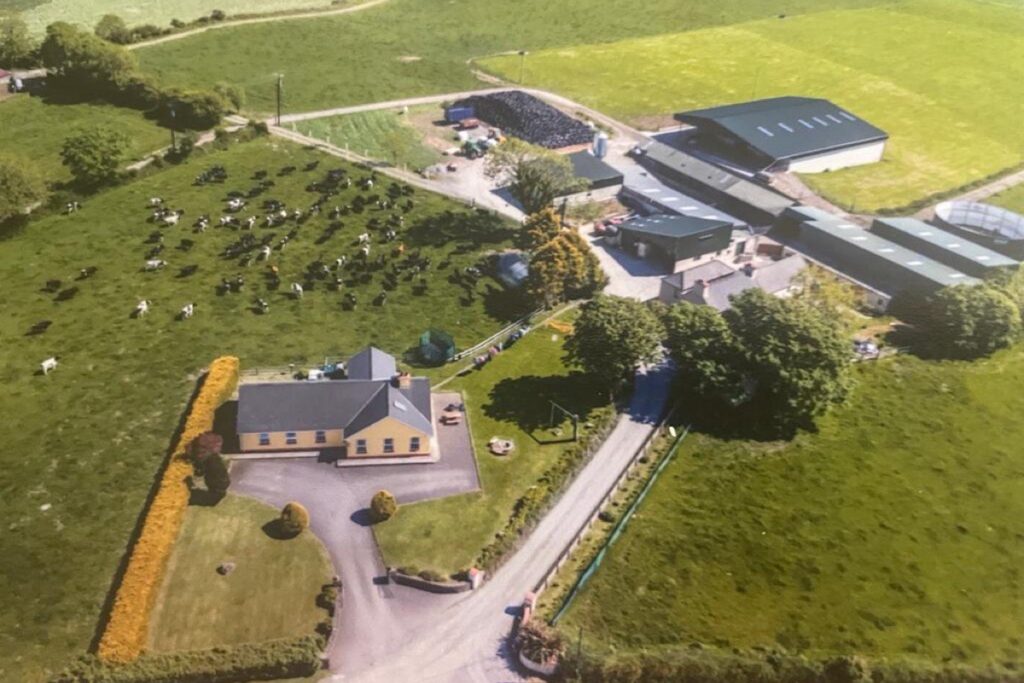 They installed a 12-unit Herringbone milking parlour in 2012 and left the room to expand to a 16-unit, and after this, they invested in a 20-unit DeLaval three years ago (with automatic cluster removers).

Milking takes about one hour and a half during peak season (including washup), she told the publication.

They upgraded from a 6-unit to save time, and as herd numbers grew, they spent long periods in the milking parlour.

On the farm, they implement technology using Kingswood Computing to record compliance data.

The farm went into a derogation as they were stocked high and wanted more freedom for things such as fertiliser spreading. The whole farm stocking rate is 2.7 LU/ HA, while the milking block’s rate sits at 3.3 LU/HA.

“If you were not in a derogation, there are still a lot of limits for farmers fertiliser and slurry wise. So, we are tightening up for the good of the countryside, and rules are there, and we stick by them, which is how it is.”

Up to 22% of the farm is what they describe as “boggy and rocky” land (habitat), and they enlist an agricultural contractor’s services to spread slurry using a (LESS) Low Emission Slurry Spreading applicator.

Marguerite feels it is “good” that more conversations are had about women in farming, and she believes that “women are getting recognition nowadays, but back along, they would not have”.

“I am lucky Michael and I are farming together and are a great team. He mostly does outside work, and I am inside doing housework and then the milking.”

“I always said I never learned to drive a tractor; I left that to him. So, I have my strong points, Michael has his, and we work well together.”

“There are plenty of women farming all their own, and fair play to them because I do not think I would be able for that. There are also plenty of other farmer’s wives doing as much and more than me and better at it, and maybe they do not get recognised.”

She feels further digital media campaigns need to shine the spotlight on women in agriculture and agricultural college courses to make it “more attractive” to women who did not grow up on farms and married into farming.

Regarding her challenges as a woman, she does not find the lifestyle’s physicality challenging but  rather varying sleeping patterns during calving season.

“Women can do everything a man can, and I think there should not be any limits that way.”

The husband and wife said there is a “good enough income and a good way of life from 160 cows” (having put five family members through college) or the family farm model and said, “there is always a place for the dairy farmer”.

They would consider increasing their herd by around 30 cows if additional land is available and intend to maintain milk production figures.

They believe they are farming as “sensibly” and “sustainability” as possible and want the younger generation to see they do all they can for the environment.

As they look to the future and plan to hand the farm’s reins to their two sons when they retire and believe “there is still room for the family farm”.

“If our sons want to take over the farm together, there would not be enough to keep two families on the farm, so they would have to do something else with dairy farming.”

“I still do not think the cow is as bad as half the things said; farming has been around for centuries and centuries. I know we got bigger when Michael’s father was farming, but there are fewer cows in the townland than when all the individual farmers were farming.”

“The world’s population is growing, and they are all going to need good-quality food, so I think there is a good outlook for farming for the next two years,” the dairy farmer concluded.

- Advertisement -
Previous article
Venison burgers for ‘people in need’ as deer population spirals ‘out of control’
Next article
Quiz: How well do you know these AI Belgian Blue bulls?