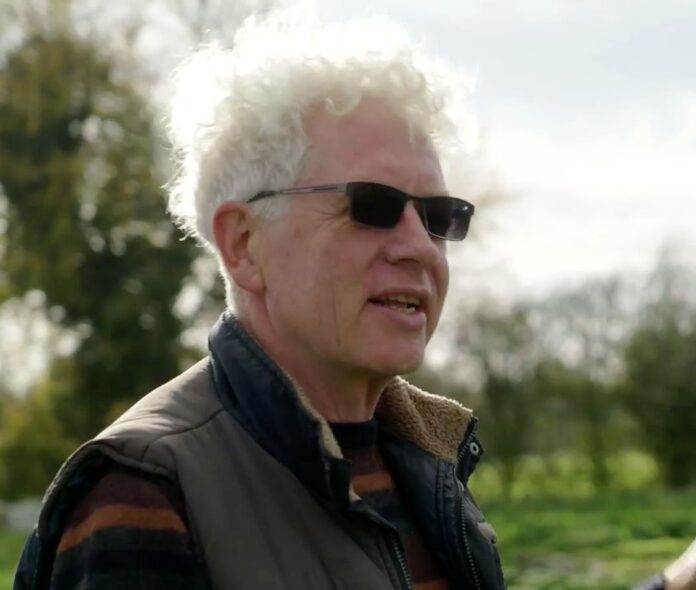 Cow horn manure and crystals are helping to improve soil quality on one biodynamic farm in Co Kildare.

He farms in harmony with nature, as a certified organic farmer, but due to how his land was used previously, he was concerned about soil quality.

According to presenter, Ella McSweeney, Harris stopped spraying chemicals on his farm 23 years ago and became organic.

He felt that soils were “still struggling because of the way they were managed in the past and the soil type”.

He explained: “The soil was tired and was running out of energy. You can see it in the plants that they were not as vigorous as they had been.”

“I knew that I had to do something. We certainly were not going to go back to using chemical fertilisers and pesticides, so I had to find another option.”

Seven years ago, after research, Trevor decided to move towards biodynamic farming, which involves spraying his land with biodynamic preparations made from cow manure buried in cow horns on his land.

Trevor favours the use of remedies mainly from manures and crystals, which he said “enhances” soil and plant health.

He told McSweeney: “These are no chemicals involved; it is a remedy. We are using horn manure to improve the soil. It improves the humification of the soil.”

“It improves the porosity of the soil, so the structure of it, and it also improves the biology within the soil. A soil that is working well will produce healthy crops.”

“The plants are more or less the same height. There is no weak plant in it and I would put that down to biodynamics.”

“We have taken cow horns from a cow that has a number of lactations, and we have filled them with manure from a lactating cow.”

“So, we are going to bury them in the ground in good quality soils, and there will be a transformation within that horn over the wintertime.”

“We want to have the opening facing down so they will not fill with water. We want them in the pit together. However, we do not want them touching each other. They will resonate in their own way separately once they are in the pit on their own.”

To date, Harris has buried over 700 horns in pits on his farm. According to McSweeney, he digs them up, dilutes them in water and sprays it on his land.

During the summer, he buries horns with ground quartz crystals and digs them up in September. He then sprays this horn silica on his crops.

“It is not material in chemistry or biological form. It is more of a pattern or a blueprint for the soil as to what to do. If it was just a belief system, it would be no good really for me. Like I do believe that it works because I have seen that it works.”

According to the presenter, biodynamic agriculture was founded by the Austrian philosopher and scientist, Rudolph Steiner, in the 1920s.

She went on to say that “it is rooted in organic principles and takes a holistic approach to farming mixed with elements of the planetary calendar”. “Animals should be reared slowly and slaughtered humanely,” she added.