That's FarmingThat\'s Farming Irelands Largest Farming News, Properties and Classifieds Network
HomeBeef‘Country music is not a race or religion; it is a community... 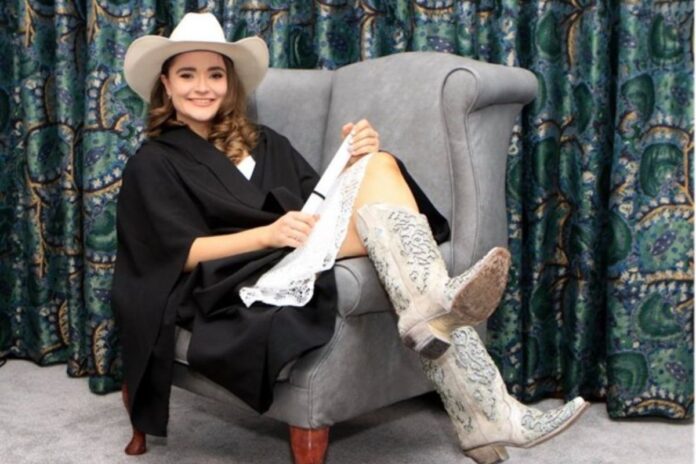 ‘Country music is not a race or religion; it is a community and family’

Catherina Cunnane, in conversation with country music artist, jiving teacher and learning support assistant, Maeve Farrell (25), who hails from a beef farming background. She discusses her rural roots, musical influences, her own ten-year journey in the industry and CountryFIT.

“I am from Annaclone, Katesbridge, just outside Banbridge, County Down. I am the fourth generation of Farrells on our family farm. My paternal great grandfather, James Terence Farrell, owned the farm in the early 1900s, specialising in flax crops.

The flax crop price dropped and left the farm in debt, so James travelled to Canada to work and send money home to the family.

Canada was not all it was thought to be, and he never returned to Ireland. My paternal great grandmother, Mary Farrell, died shortly after James left, and the family farm was taken over by the neighbouring Hillis family.

James’ oldest son, Johnnie Farrell (my grandfather), worked day and night for years to pay the farm debt off and return it to the Farrell name in his thirties.

Johnnie was reared in what is now one of our storage sheds. Johnnie and his wife, Kathleen (nee Pyers), reared their nine children on the family farm, all partaking in the daily chores of animal care and crop harvest.

At the age of 15, my dad (Terry – the oldest boy and second oldest child) became a full-time farmhand and inherited the farm when my grandfather passed away in 2000.

I am the youngest of four children to Terry and Majella (nee Mathers, Newry). Just like my siblings, I have grown up on the farm. My father stopped growing potatoes before I was born, and we are now a beef cattle farm.

Some of my earliest memories from the farm are from painting the round bales, so the crows did not pick at them and help with TB testing and calving.

Bucket feeding my pet calf, Michael, after his mother died, has to be the most prominent memory from my childhood. The job of bottle or bucket feeding the calves still tends to fall to me.

Michael was named after singer Michael Jackson (MJ) as he was born the same MJ died. 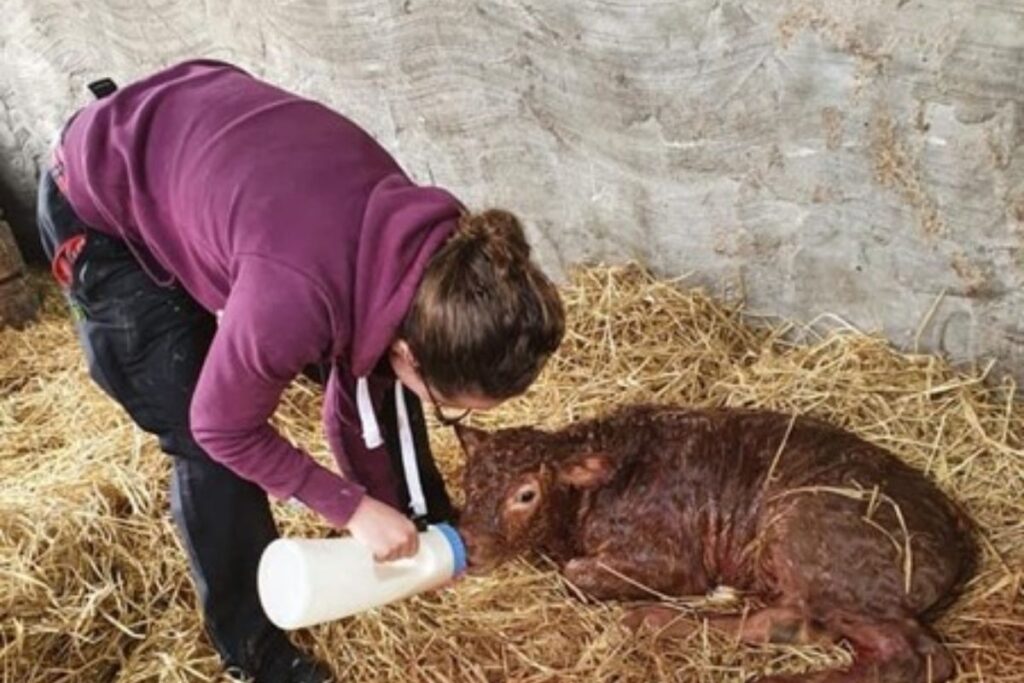 Besides, music icons have always played a shaping role in my life, from the American Country greats to the Irish.

From watching videos of Loretta Lynne, Patsy Cline and Dolly Parton to seeing Philomena Begley and Susan McCann live, the females that have graced the stages before me have definitely left an impression and enforced a passion for one day hopefully filling their shoes.

My dog, Cash, is named after the legendary Johnny Cash, and I named a heifer calf born on the same day as her namesake Dolly Parton.

Even my final year college thesis was based upon Dolly Parton; a first-class grade was awarded for this.

I grew up with parents who frequently went to dances in the Sheepsbridge, Newry.

When I was old enough, I joined mum and dad at concerts and followed the BBC Radio Ulster Hugo Duncan’s roadshow during the summer months with my mum and family friend, Vera Taylor.

I went on to study a Bachelor of Arts with Honours in Commercial Modern Music specialising in Vocals at BIMM (British Irish Modern Music) Institute Dublin from 2016-2020.

I grew up with Dolly Parton, Johnny Cash, Mike Denver, Philomena Begley, and so many more playing around the house. My mum is a great singer, and growing up involved in our local church choir has definitely helped instil a passion and drive for this field.

I am trained in grades as a music theatre performer to diploma level and through my college studies, I trained in a range of styles to help develop and niche my style. I would categorise myself as a country singer.

My first country stage performance was at the age of 15 as a surprise artist on the Showtime with the Stars bill in Newcastle Civic Centre with compere and promoter, Sean Wallace.

Following on from the success of this performance, Sean featured me in his Christmas Show in Iveagh Cinema Banbridge alongside Hugo Duncan.

I released my first single, The Bramble and the Rose, in January 2014. This was a gift from my parents for my 16th birthday present.

All in all, I have released one studio album and four studio singles to date, with album number two in the works.

For album number one, I recorded Crossroads, Truck Driving Woman, A Rose Has To Die, Black Velvet Band, The Bramble and the Rose, Three Wooden Crosses, Light in the Darkness Gospel Medley, Mama He’s Crazy, Twist and Shout, In My Father’s House, Rock ‘n’ Roll Shoes and The County Down

My cover versions include Daddy Dance With Me, Dancing Queen, and originals include: The Galty Is No More and Long Live the King (a tribute to the late ‘Big Tom’.

As I was still studying music, albeit online, I was able to keep making music and singing, but the no dancing part of it all got to me. 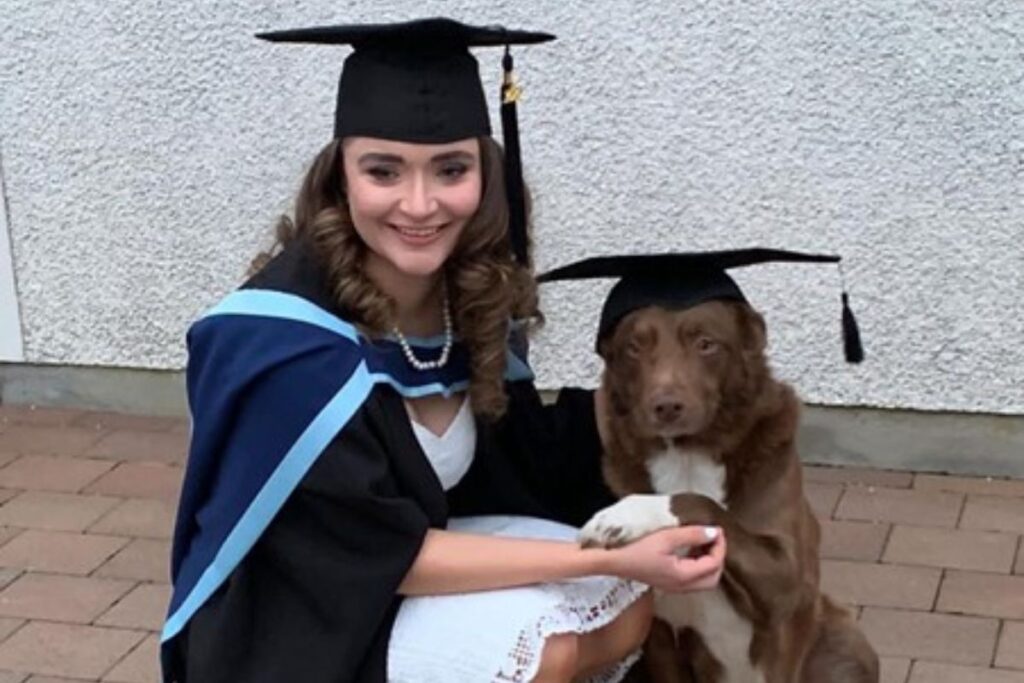 When the pandemic hit, my college moved from in-person to online, and I took on a new job working in a supermarket as all other work had stopped.

I have been teaching jiving for around nine years now. What is there not to love about jiving? It is great for fitness and health. There is always a bit of craic and sometimes friendly rivalry when a fast set comes on at a dance, and we try to out-dance each other; it is good for the soul.

During the lockdown online CountryFIT dance class, my dog Cash, became well-known and even had his own fans tuning in to say hello each lesson.

Cash has become an important part of my life over the past four years, and viewers got a taste of how close we are during the lockdown lessons.

Now that the lockdown has ended, the CountryFIT dance classes have begun in person.

Knowing where to teach is the biggest challenge I face as a jiving teacher. For some dancers, attending classes can be affected by many things like family life or work.

Therefore, I must make sure that I plan my classes and seasons around local events, the farming or the sporting calendar for specific areas. 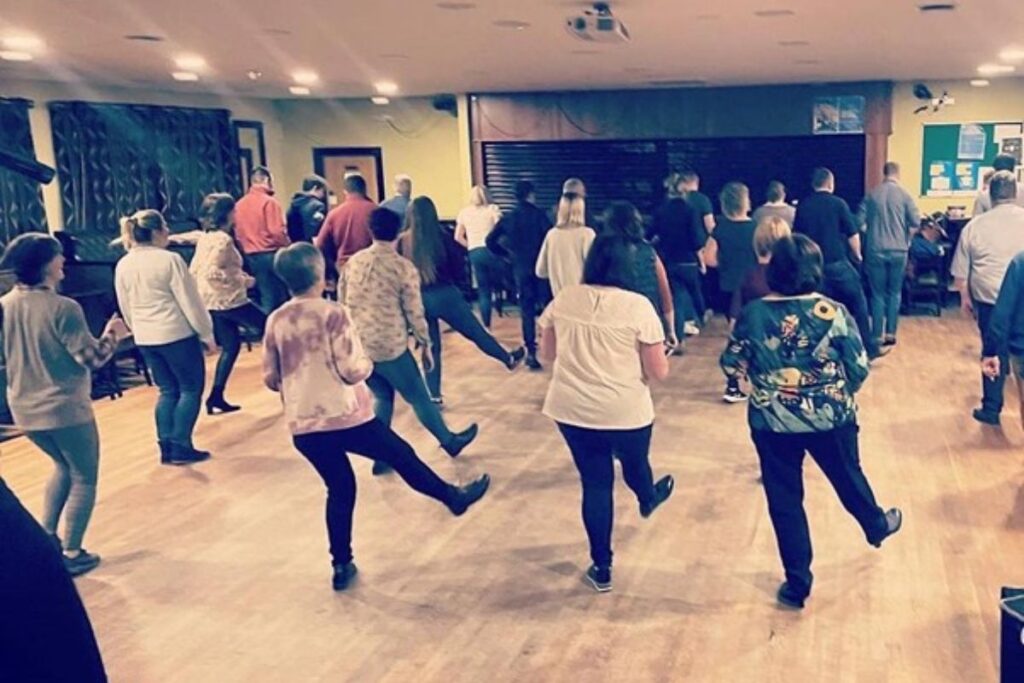 Moreover, I have featured in a few previous episodes of Keepin’ ‘er Country. During lockdown, I appeared with my mum, dad, and cousins in the Derek Ryan at home special. I was part of the Tura episode as I taught him how to jive.

I love performing, no matter what track it is. One of my favourite memories from a recent gig was at my first gig back post-lockdown in Watters Old Coach Inn, Castleblaney. I was called for an encore and performed my version of Blanket on the Ground.

The dancefloor was full, and the crowd sang along and raised the roof when I gave them the chance to sing a chorus on their own.

Previously, I performed as part of the St. Patrick’s Day celebrations in Luton, England, in March 2016. I have also had the privilege to perform in the legendary Nashville at the Nashville Palace and Legend’s Corner.

I normally feature on cabaret-style bills stepping in along with bands like the Ryan Turner Band, Country Harmony, and the Barry Doyle Duo, to name a few. Venues can include hotels, theatres, clubs, and pubs.

Country music is not a race, religion, or a specific person. It is a community and a family.

Getting exposure can be challenging. In the current times, social media is so important for artists, and I have a habit of not using social media to its fullest potential.

With algorithms changing so often, it can be hard to keep up-to-date and stay on track. I try to make music that people will enjoy, and I hope to continue doing so.

Currently, I am working as a learning support assistant in a secondary school in Banbridge. 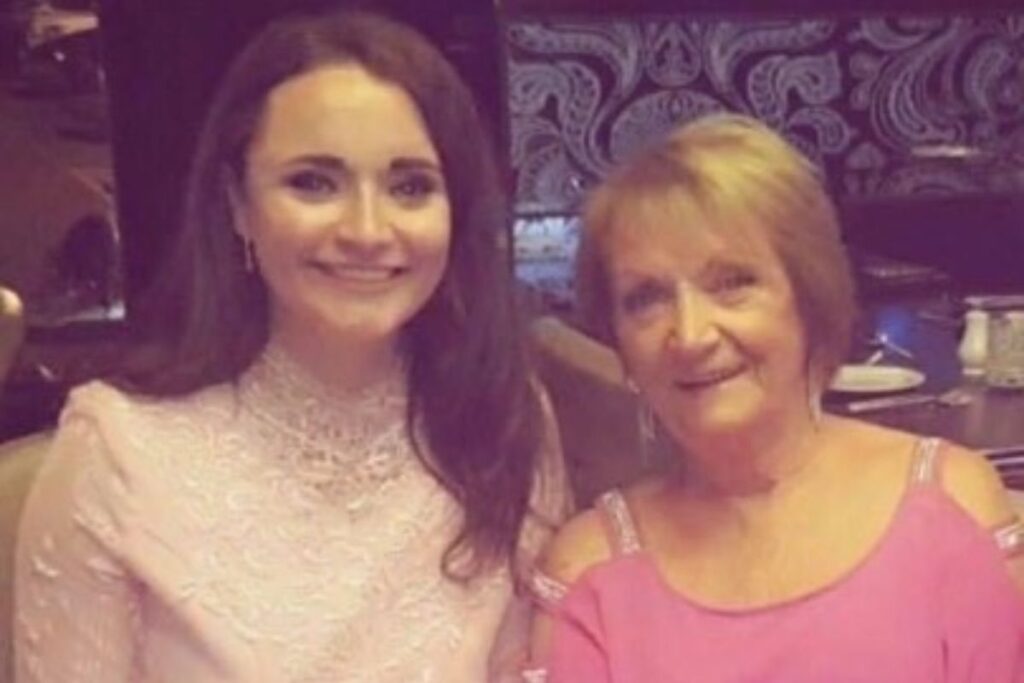 I think every job has its challenges, but if you are passionate enough about something, any challenges you face will be worth it.

You can have setbacks but getting back up and moving on to the next goal and not taking no for an answer gives you the drive to succeed.

Over the past ten years, especially country music in general in Ireland has proved popular across all ages. Previously country would have been seen as an ‘older person’ genre.

However, artists in Ireland like Derek Ryan, Johnny Brady, and Cliona Hagan have helped revive a new love of country and jiving and country dancing.

International artists like Chris Stapleton, Luke Combs and Carrie Underwood have helped country music (American country) have a revival with the introduction of the Country 2 Country (C2C) festival annually in Dublin.

This year, I celebrate my 10th year in the country music industry. I am in the process of writing and choosing songs for my next album, which I hope to release by the summer of 2023 and continue touring and gigging.

With an established career in country music, heading towards having my own dancing band is my ultimate goal. I want to grow the CountryFIT brand and dance lessons and teach in different venues.

The best piece of career-related advice I have ever received is this: keep going. You will be told no and feel like you have failed many times, but success is only around the corner if you keep going. 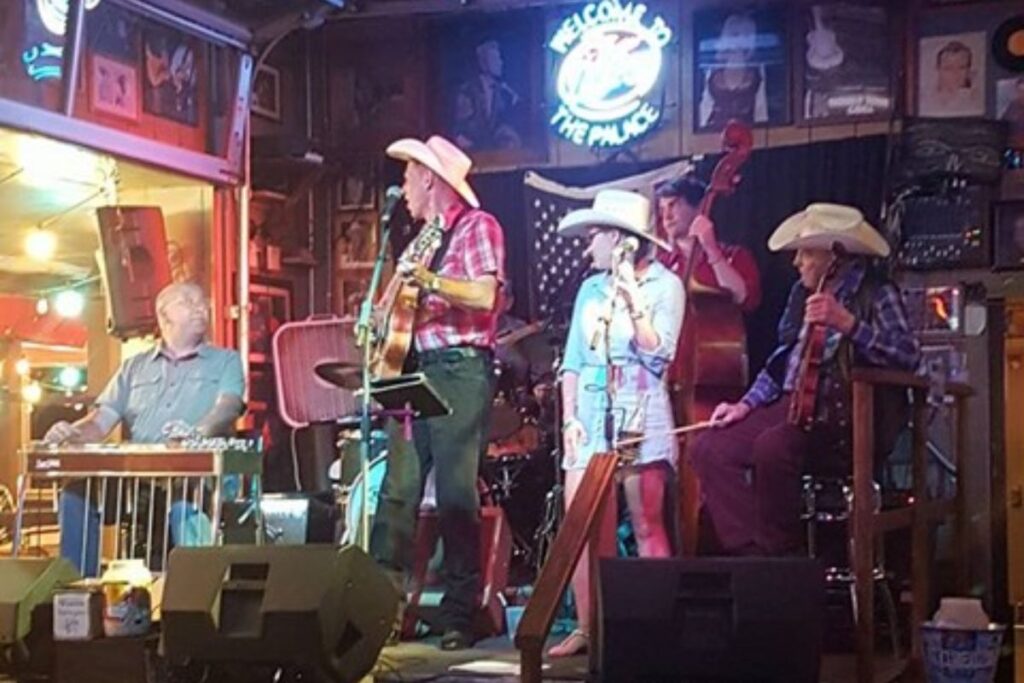 In what seems like the fastest ten years of my life, I have completed three music courses (including a bachelor’s degree), launched my debut album to a sell-out crowd and toured across Ireland and the UK and sang in the homeland of country music, Nashville.

Furthermore, I have started teaching country dancing across Ulster, placed 3rd in Ulster Fittest Jivers (dancing for four hours non-stop), organised and completed Ireland’s first-ever 12-hour non-stop Jive-a-thon for charity, overcame my fear of heights by doing a charity skydive, and that’s only the highlights.

Oh, and I had my own Irish Country Radio show for five years on Lisburn’s 98FM.

I cannot thank everyone who has supported me to date, and I cannot wait to bring you all on the future journey.”