In this week’s Suckler Focus, That’s Farming, speaks to Kevin Reilly-Tighe from the Corranure herd. He discusses why he is continuing to breed the same cow-type as his grandparents, using a large amount of AI, teaser bulls, and aiming to calf heifers at 36-months.

The Reillys recommenced suckler farming two years ago in Corranure, County Cavan, after dispersing their herd in 2018, following 35 years of breeding “top-class” females.

The family now plan to increase their Corranure suckler herd to 50 cows.

He works full-time in Poles Co-Operative Creamery Limited, Cavan, as a general worker and every Friday in Cavan Mart as an auctioneer’s clerk on the rostrum in the cattle ring.

“My grandfather kept all Charolais-cross, Hereford-cross, Belgian Blue-cross, and Limousin-crosses. Hereford cattle, years ago, are a lot different from Hereford cattle these days. They are a lot bigger framed,” Kevin Reilly Tighe told That’s Farming.

“My grandfather also kept Simmental-cross cattle with plenty of milk but with shape. They brought great progeny. He used to sell his weanlings from between six and seven months.”

Kevin and his grandfather like a cow with colour, a powerful carcass, strong conformation, who can rear a calf, has good wide shoulders, a good wide pelvis and a “nice, sweet”, head.

“I am going for around the same cow-type as my grandfather due to the amount of success he had with that cow-type. They were continental cows with a fair amount of milk.”

The farm runs a breeding programme comprising a large amount of AI, and plans to run a Charolais bull with mature cows, whilst continuing to AI heifers.

“You cannot go wrong with AI because you are using superior and stylish bulls.”

“You know by a bull’s calving difficulty percentages and cow-type you have, how easy calving the bull will be. So, you can mix and match the sires you want.”

“We have a Friesian teaser bull that we got last year, which I find a bonus for heat detection.

“If there is a cow in heat that evening, you know to get the AI technician for the AM-PM rule.”

The family calf their herd down in March, which allows them to turn cows out to pasture post-calving.

They calf heifers from 24-36-months-old. They aim to opt in the future for the full herd to calf down at 36-months-old.

The family retained three heifers around 24-months-old for breeding from their original 60-70 store cattle, second-calving cows, and cows and calves they bought at foot.

This marked the last bloodlines of Kevin’s grandad’s original herd of 35 cows and comprised 60 cows.

“I did not want to let go of them. I wanted to keep them to put them in-calf.”

“We got rid of the calves; we kept the cows, and put them in-calf again. Then, we picked about six more store cattle that we had suitable for breeding heifers.”

“The way we picked them was through their shape, long peaks which was a sign of milk, their colour, shape and if they were potential cow makers.”

“We were not going by their age, just by cow-type, style, and power.” 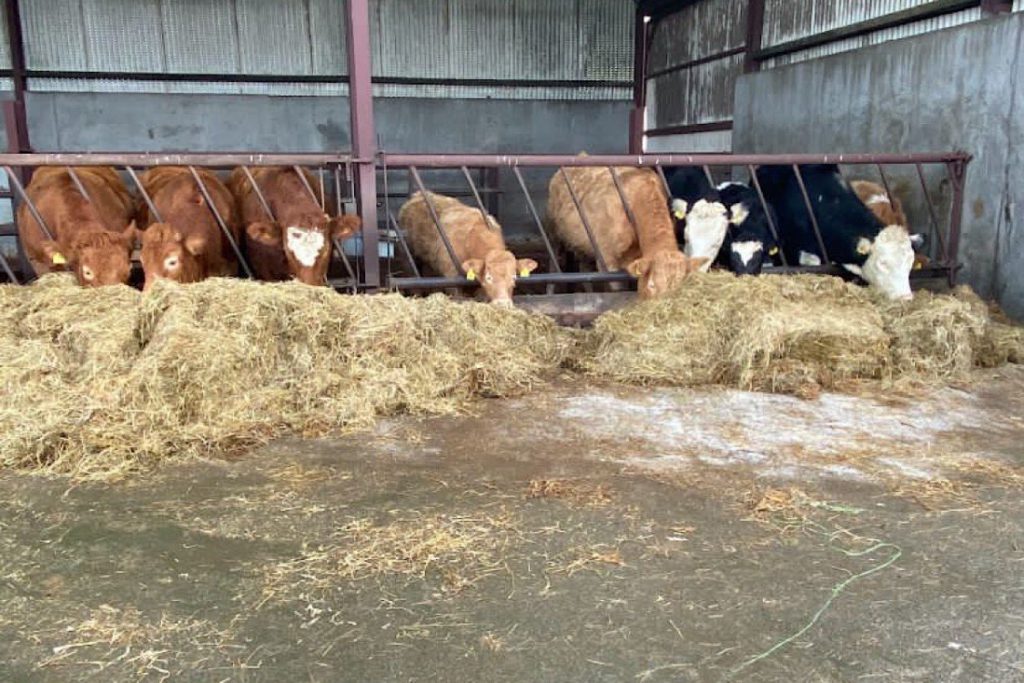 Kevin and his grandfather aim to replace 10% of their herd and cull their cows due to reasons including injury, fertility, or low milk.

The family plans to sell their quality weanling heifers and bulls in the mart and retains some plainer-type weanlings, with the remainder going for beef in the future.

“When growing up, I watched my grandfather produce these top-class weanlings, and they would be the superior end of the spectrum in marts.”

“That is what I aspire to be in the next few years, to produce that quality weanling. There would not be a whole lot of money out of bringing weanlings to €700 or €800.”

In addition to this, as mentioned, they buy 40-50 375kg-400kg store heifers annually. They range in breeds, including Charolais-cross Limousin-cross and Hereford-crosses. 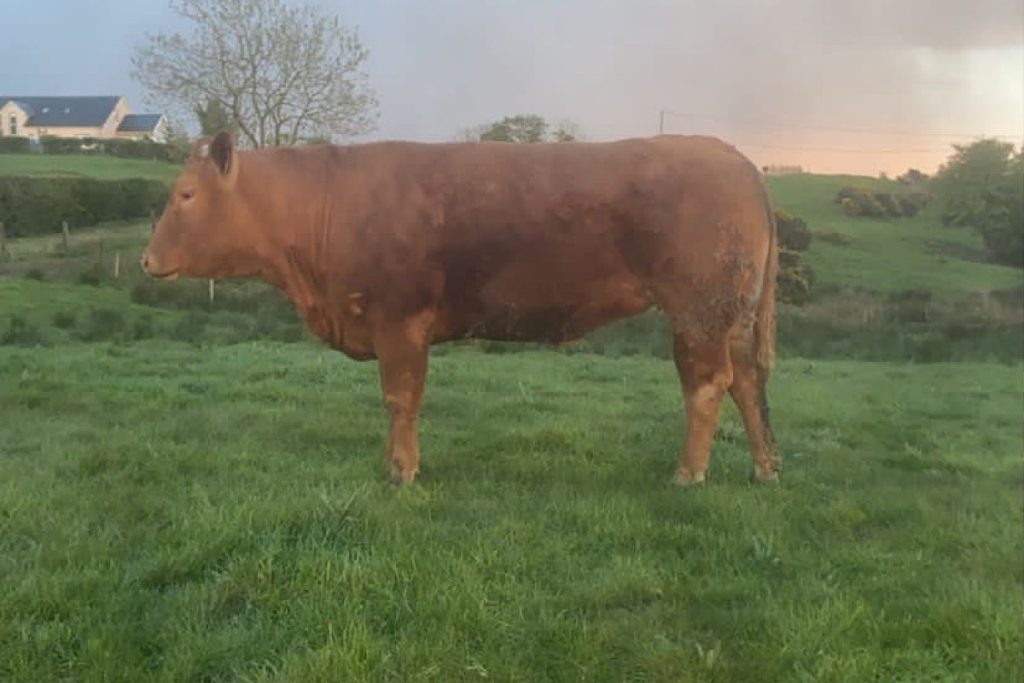 Kevin and his grandfather manage their grassland by soil sampling every two years and only applying fertiliser on silage ground.

“We started to strip graze our store cattle last year, and we are very happy with that. We took out surplus paddocks for bales of silage.”

“I plan to utilise the farm to grow grass more, set up more paddocks, and more easy accessible drinkers for livestock.”

“Maybe, in the future, I will measure grass. However, with fertiliser prices, you would want to be soil sampling, spreading lime and utilising every blade of grass.”

“Where you place your drinkers is essential for overall productivity of your field when you are strip grazing.” 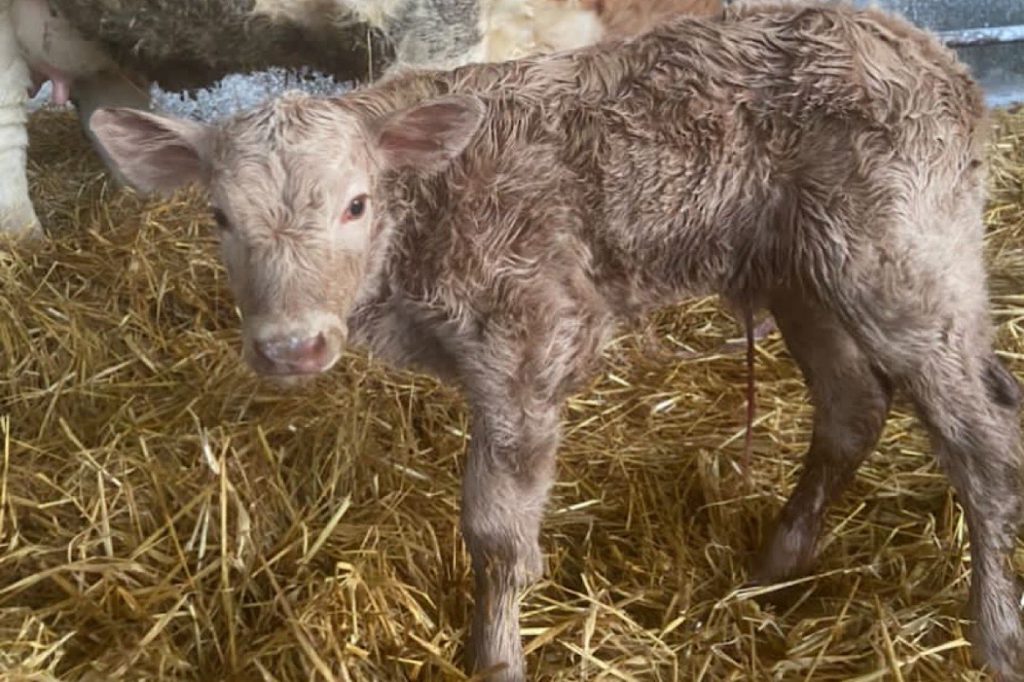 As mentioned, they plan to increase numbers to a 50-cow suckler herd and expand their land base accordingly in time.

In addition to this, Kevin plans to build his own small pedigree Charolais herd and produce a quality weanling “that is saleable and will achieve good money in the mart”.

Kevin believes that “with the dairy herd increasing, the demand for your quality beef animal will increase because of progeny the dairy herd is entering into the beef industry”.

“With the right government support and rewarding farmers for producing a quality calf, I can see the suckler herd surviving.”

“If government support active farmers farming their land to the best of their ability, trying to produce a quality product, and if the suckler farmer is recognised for all the good work they put in, I see the suckler herd thriving.”

“If they try to advertise to foreign nations the quality of our beef that we are producing on a grass-based platform and the wholesome feed that we are feeding our cattle, I can see the suckler herd excelling.”

“Also, if there are more exports and advertisement for our produce in Ireland. It is one of the cleanest places to produce beef in the world due to the grass available to us.”

“When you think about the amount of money farmer’s leaves behind in local co-operatives, shops, contractors, advisory groups, employees, farmers will spend money.”

“If they get what their produce is worth in the meat factories, they will spend that money back into the economy,” the suckler farmer concluded.

- Advertisement -
Previous article
Communion money calves prove to be a wise investment for Offaly farmer
Next article
‘We believe the state should purchase at least 100,000 pigs from crippled farmers’