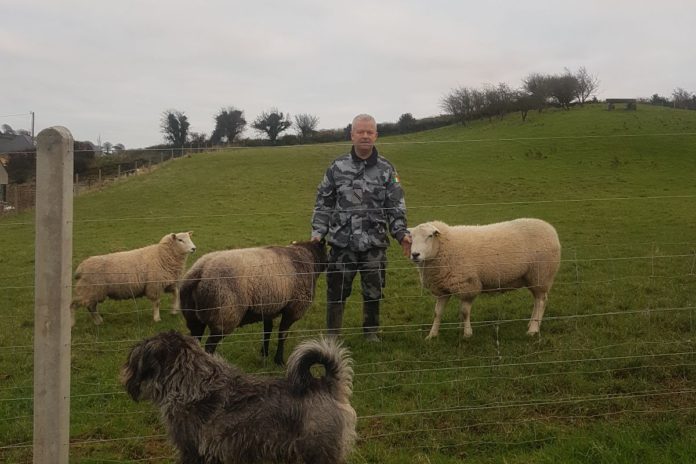 ‘I started with nothing’ – HGV mechanic’s journey to 27 sheep

Catherina Cunnane, That’s Farming editor, in conversation with Marcus McKenna, Co Cork in this week’s sheep farmer segment. They discuss how his mother’s work in a mart canteen sparked his passion for farming, his work in the army and Navy and establishing a sheep farm from scratch.

“I am 44-year-old Marcus McKenna from Tullyland, Bandon, Co Cork. I do not hail from a farming background.

My earliest farming memories revolve around going to the mart in Bandon after school as my mother, Betty McKenna, worked in the canteen.

I was 13-years-old and had just started secondary school in Bandon.

Ovbiously, I was too young to get a herd number, so she got one, and I used that. I remember getting a dealer to buy and deliver calves to my home and getting 10 and 22-month premium payments at the time.

My mother would feed and take care of calves while I was in school as they were on milk replacer.

I bought a few calves as we had an acre of land at home, which sparked my interest.

Then, I attended Darrara Agricultural College for my Green Cert, followed by a farm management course.

I loved farming, but after doing this course, I realised the hours were long, and the pay was poor at the time. But more importantly, I had no farm to go home to. So, I joined the army instead in 1998.

I approached my neighbour to sell me land in 2015. It took me six months to build up the courage.

Only for Dan-Joe and Ann O’ Sullivan selling me the land, I would not be sheep farming now. I tried to get land around my area to rent, but it was impossible. 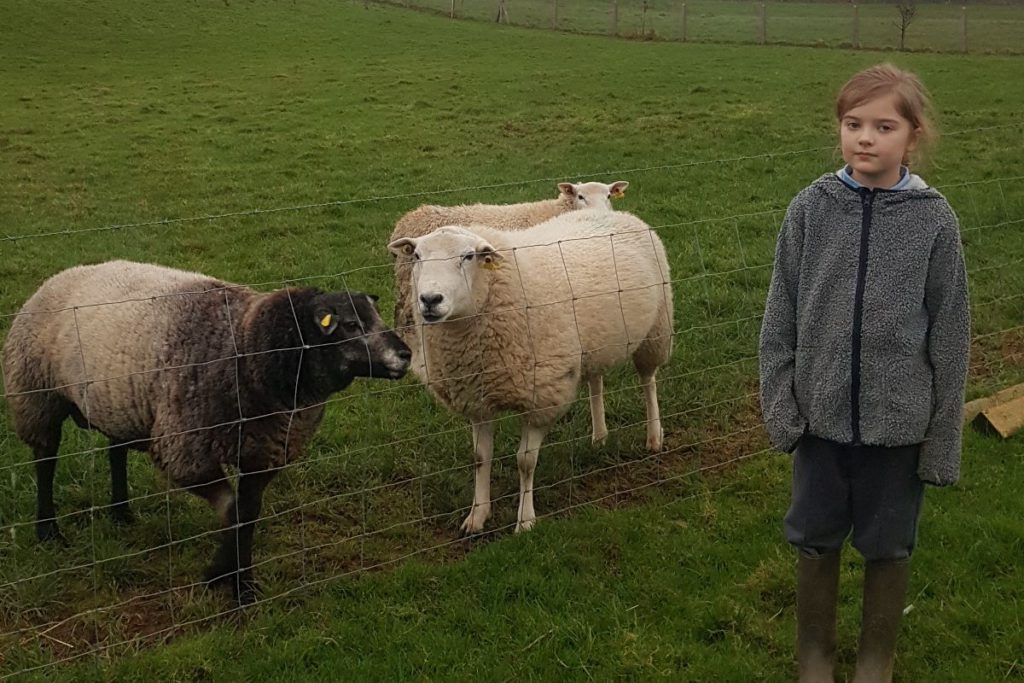 The farm is beside and behind my house. I purchased it from my neighbour, which I have helped out on his tillage farm since I was 15.

In total, I own 9-acres and only purchased 5 of those last year, so I will have to increase numbers. I have use of my father’s acre and uncle’s acre.

My wife, Aisling, helps with lambing along with my son, Daniel (14) and daughter, Roisin (10).

90% of my flock are pedigree Lleyns, 8% are Lleyn/Blue Texel, and the remaining 2% are other breeds.

I chose Lleyn for their ease of lambing. In most cases, the lambs are up and sucking within 20 minutes. I would not have time to be messing with them! Dams have plenty of milk and can raise triplets, which is ideal as I work full-time off-farm.

I started with six pedigree Lleyns from Wicklow and expanded from that.

The first year, I lambed them outdoors and have operated an indoor lambing system since then.

I often put Lleyn ewe lambs in-lamb, and they generally have no bother lambing.

In total, I have 27 sheep, including rams. The main flock lambs from February 6th. I lamb early to have good quality ram lambs in September for breeding that are 50 to 60kgs.

Furthermore, I get sheep scanned 70-80 days after the ram goes in.

I used sponges on my main flock this year as a trial, so hopefully, lambing will be over in 3 to 7 days. I sell to private customers, mostly in Kerry and even Valentia Island! 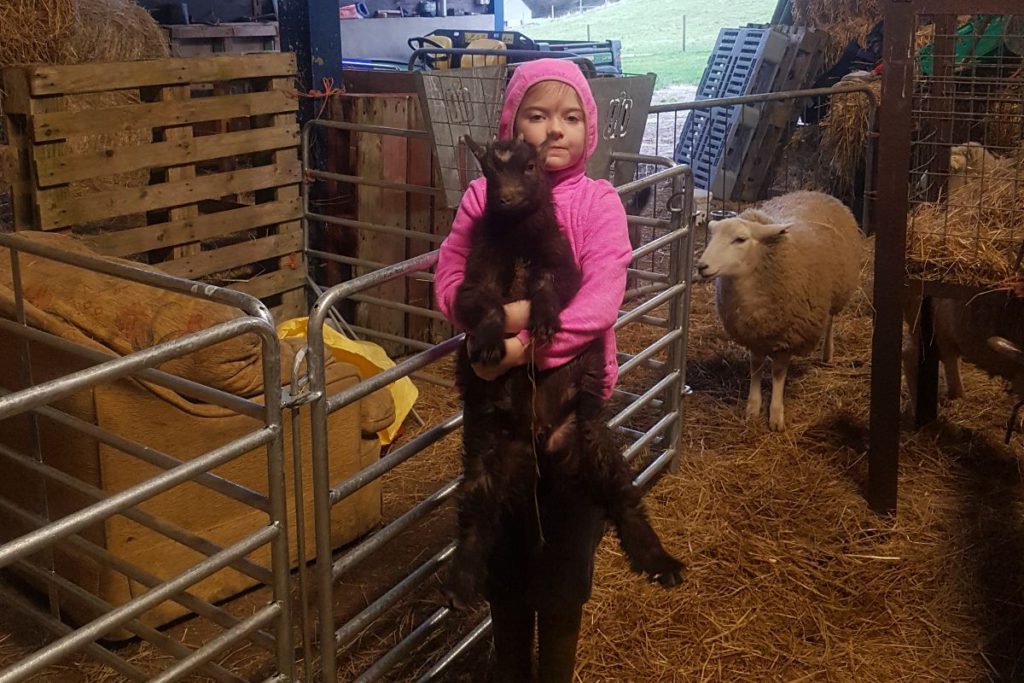 The most enjoyable aspects of farming are lambing and meeting customers – sheep farmers. I am a member of Lleyn Sheep Society in Wales.

My main responsibility is sheep welfare, and I treat all ailments promptly.

Successful sheep farmers should keep good records, especially for choosing replacements and having a vaccination programme.

Besides, I use a lot of mineral licks before and after lambing works well.

I use straw for bedding and feed good, quality hay. Poor quality hay is no good for sheep. 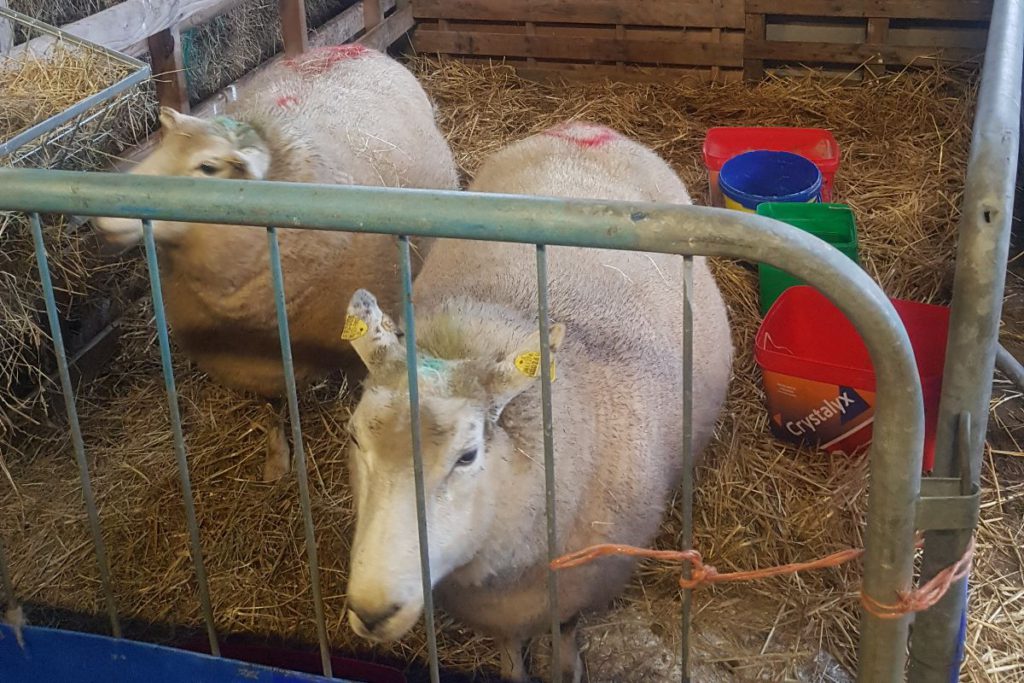 I find lambing season is the hardest part of farming, but I look forward to it every year. It will be interesting to see how the sponging will go for me.

The first years, my friend, who came from a farming background, lambing 400 sheep ewes, taught me a lot.

This year, I will take a week off for lambing as I can plan with the sponging.

Last year, I could not take time off as I was on a promotion course, so I would do the nights, and my father and wife would do the days. Also, I had a friend on standby. Lambing went on for four weeks, which is another reason for sponging.

It is very important for the part-time sheep farmer to select the correct breed.

I do 4 to 5 24-hour duties at work, so my father, wife, and kids watch sheep, especially at lambing time.

My main highlight is getting my family involved. A few years ago, I had a ewe close to lambing. I told my daughter I would wake her, but it was 4 am. She came up with the head torch 10 minutes later and gave out to me as I did not wake her as she was only 5!

The shed is 60 metres up the field. Also, my wife, Aisling, helps with lambing, but at the beginning, she wanted nothing to do with them. Now, I am still working on my son, Daniel.

I also take my sheep to local shows. I like to promote sheep, especially in my area, as it is a mostly dairy and tillage region. 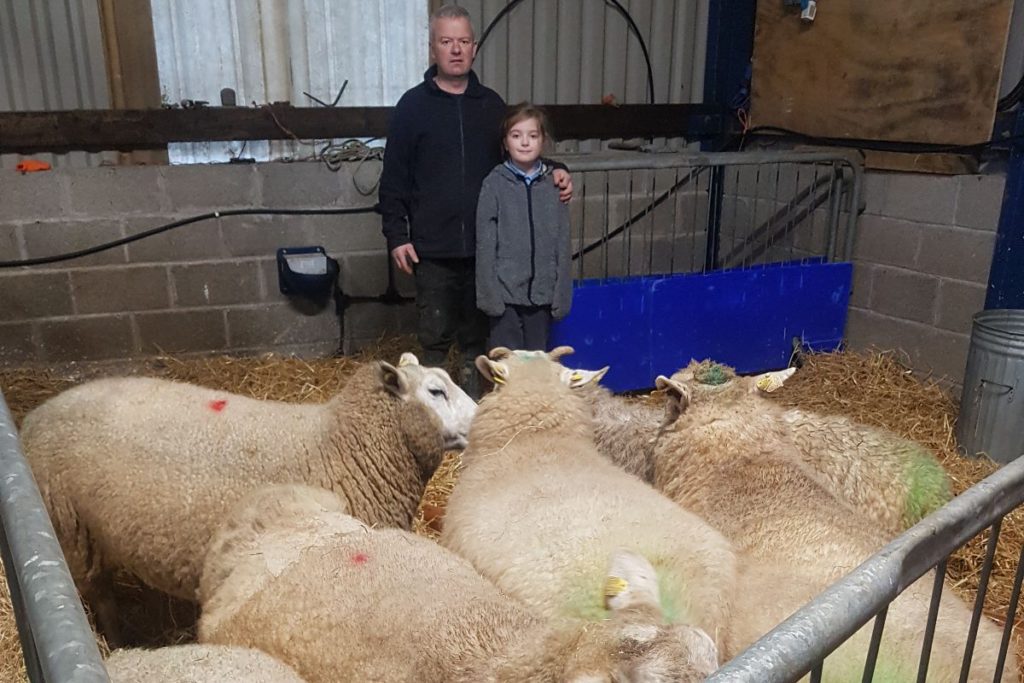 My future plan is to keep doing what I am doing, increase the flock with more Blue Texel-cross-Lleyn influence.

I was very impressed with the lambs and ease of lambing. I have six years left in my job, so if land came up for rent near me, I would drive numbers.

Selecting correct rams is very important, especially in a pedigree flock, and I believe if you sell a good ram or ram/ewe lamb, that farmer will come back to you again and spread the word that you have good stock. 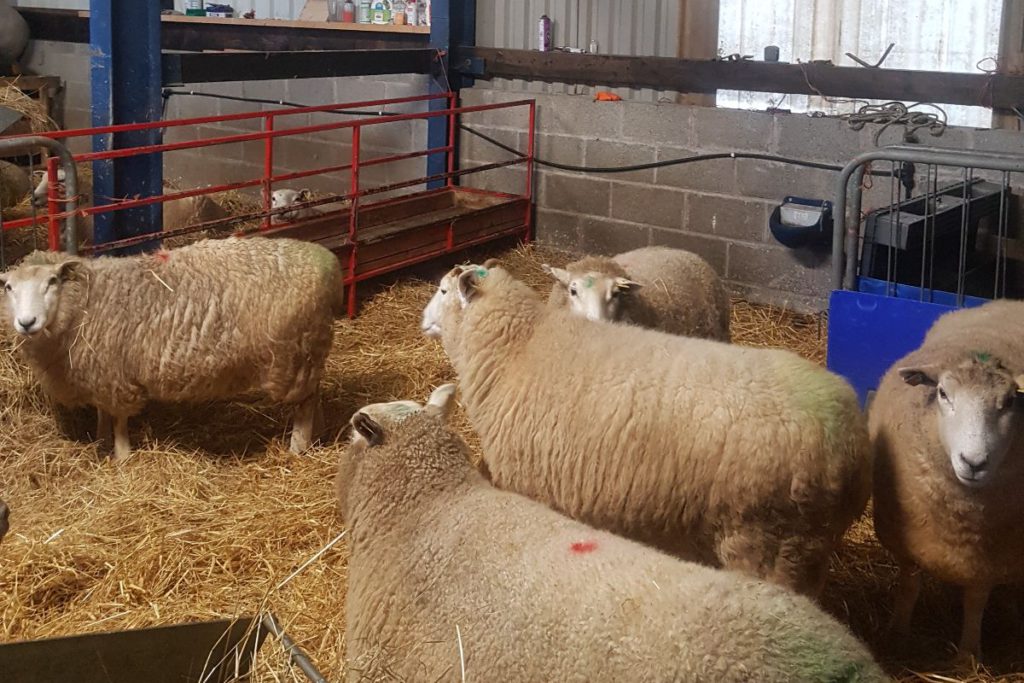 I run an organic sheep farming enterprise, and I think it was a good move, especially with fertiliser prices.

Furthermore, I plan to reseed a few acres in the autumn put out plenty of pig slurry for P and K and a good clover mix in the grass seed for nitrogen. I think that is the way forward.

Also, I put out lime, which is very important.

I only got electricity into the shed before Christmas, so I plan to put in a camera next year.

In summary, started with nothing! I have purchased 9-acres at 3 different stages. My first purchase was in 2015 – 1.5-acres acres, and I built that up to 9.

I had to build a shed, do all the fencing, hang gates, and connect water to all paddocks, which I undertook and am proud of.

At the moment, I am replacing timber fencing posts with concrete posts. It is expensive but a lifetime job.”