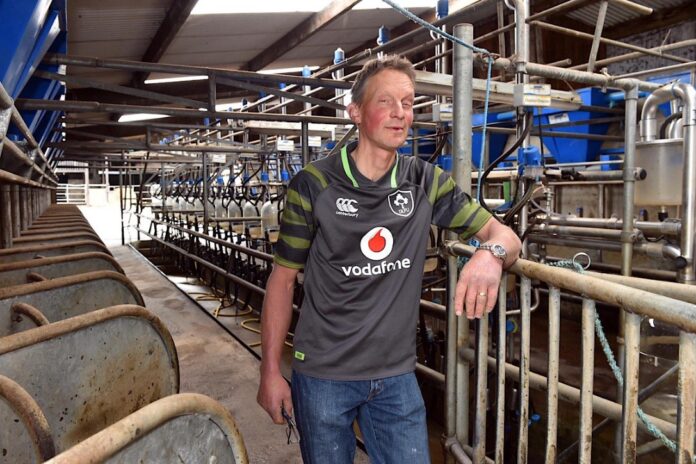 ‘If we can grow more grass, we will keep more cows’- 180-cow farmer

In this week’s dairy series, That’s Farming, speaks to Ian Kingston,  winner and overall winner at the 2022 Carbery Milk Quality and Sustainability Awards. He discusses taking over the family farm, the advantages of cross-breeding, calving heifers at 24-26-months-old, grass measuring and his outlook on the future of Irish dairy farming.

Ian Kingston from Sillertane, Dunmanway, County Cork, a third-generation farmer, milks 180 cows at peak on a farm once purchased by his grandfather, Harry, over 100 years ago.

He expanded the herd from an initial 50 females, leasing and buying quota from his co-op as required and purchased a nearby farm in 2014.

Ian described the farm being more a transition to his name rather than a takeover on one definite date, as he worked with his parents for many years before taking the reins.

“I grew up on the farm. My parents, Richard and Kathleen, were milking cows before me; I grew to like it and decided to stay with it. I was in Clonakilty Agricultural College in the late 1980s – it was a one-year Green Cert course then.”

The farm has been crossbreeding for over eighteen years, currently using Jersey-cross and Norwegian Red cows, with a share of three-way crossings in the past.

“The farm is in a high rainfall area, has a lot of the farm reclaimed, and we felt the lighter and hardier cow was more functional than sticking with a Holstein-Friesian type cow,” Ian Kingston told That’s Farming.

Ian strives to breed an efficient, healthy and fertile cow and has a herd EBI of €204.

According to Ian, he fed 600kgs of concentrates to achieve the above performance figures.

He feels cows will increase in production figures; however, he predicts a similar SCC as last year and is of the view that figures should finish at 15kgs-20kgs more milk solids per cow than the previous year.

Ian, a DIY AI technician, breeding for twelve weeks, around April 28th to July 18th, uses a homebred stock bull to identify cows in heat and to serve some heifers.

AI has always been at the forefront of the farm’s breeding programme dating back many years to his parent’s time.

However, Ian introduced a large amount of sexed semen this year and plans to use more in 2023.

The farm selects a certain number of dairy sires and then uses the Dairy Beef Index, mainly choosing Angus and some Hereford bulls.

He selects sires based on maintenance, kilograms of milk solids, fertility, health, and a bull that shows a positive breeding value for milk.

“I have my concerns about the gene pool being concentrated, and if you go back the line, a lot of them are related to four or five bulls. So, I would be keeping away from that scenario developing.”

“I think the advantage of crossbreeding is that it allows you to stay away from breeding closely like that.”

Calving starts on January 25th, with 70% of calves born by the end of February.

He chooses a spring-calving system as it suits the farm’s grass-based system and allows him to get cows out to the pasture after calving which results in the need for “very little” inputs apart from grass and silage.

On the farm, heifers calve at 24-26-months-old, as he believes “you get good production in the first year, and they are strong and go back in-calf quickly”.

“A strong heifer inevitably leads to a strong cow and a cow that will stay in the herd and do the business.”

He intervenes in up to 3% of calf births annually and said the herd’s calving interval is around 370 days, with the 6-week calving rate of 86%.

He has a strict culling policy and sells cows that are infertile, lame or develop issues with SCC/production figures and age.

Ian aims to keep 20% of their replacements, while he sells excess heifers as calves on-farm, and male progeny and beef-sired calves to mainly Holland for export.

For the past twenty years, Ian has been measuring grass on the farm.

Data he collected on the farm indicates that last year, the farm will grow 11.5t, its most significant grass figure to date, as it generally ranged from 10t or 11t in recent yeara.

In addition, he added soil fertility is also “moving in the right direction”, having also recently reclaimed land.

He also pointed out that when providing this information, it is important to note that the enterprise is a hill farm and 500 feet to 800 feet above sea level.

Ian plans to plant more clover and reduce his nitrogen fertiliser use, as weather is a challenging factor each year on his farm.

He milks in an 18-unit Dairymaster parlour installed in 2002, with automatic cluster removers and cluster flush feature retrofitted onto the 18-unit system in 2020, upgrading from an 8-unit Dairymaster plant – due to longer milking times.

Milking is undertaken twice-a-day and takes an hour-and-a-half each session, twice-a-day, with the help of a relief milker enlisted three evenings a week and a part-time worker two days a week.

He has holiday cover as required, with his mother and wife, Marie, (mother to Emma (13) and son, Dylan (14) also helping as needed.

He plans to streamline cow flow and install a variable-speed vacuum pump for his milking system.

Challenges and the future of Irish dairy farming

Challenges he faces include environmental regulations and rising input costs.

“We face several incoming environmental regulations, and rising input costs are a threat, especially fertiliser, feed and energy. Also, the availability of labour is an issue for farmers but contractors, who we depend upon to do a lot of our work.”

Looking ahead, the direction of grass growth will determine herd expansion – “if we can grow more grass, we will keep more cows”.

He feels the farm is in a “comfortable” position regarding grass growth figures, and cow numbers and any herd increases will be “marginal” in the firm of a single-figure rise,

“In my opinion, there seems to be a big demand for what we are producing around the world, and there will probably be increases in per cow production.”

Ian reacted to the recent announcement of him winning the Drinagh Coop section and tapping out as an overall winner at the Carbery Milk Quality Awards:

“It is an honour and privilege. Whatever about the achievement, I am very proud to be a part of Carbery and Drinagh Co-op and to get the top award was unexpected,” the dairy farmer concluded.