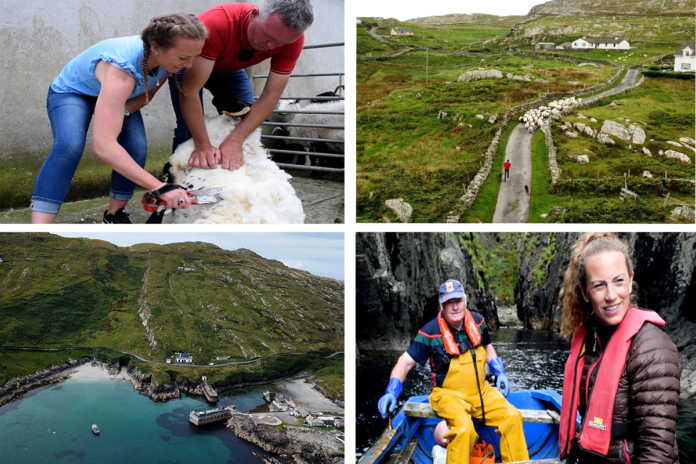 That’s Farming is excited for the release of their new series – ‘Island Farming Adventures’, which takes us on a journey to discover what it is like for the farming communities living on our beautiful coastal islands.

Our first island on our Island Farming Adventures is Inishturk where our host Caroline Keane will be catching up with Eamon Heanue a sheep farmer, farming for over 25 years on the island. Eamon keeps mostly Connemara Blackface ewes and sells his lambs to the mainland.

During the series Eamon takes on the brave task of showing Caroline how to shear a sheep with a blade shears.

We also got speaking to a well-known fisherman, Michael O’Toole who was delighted to bring us out to sea to talk about his lobster farming and to show us a few tricks of the trade!

Michael’s love for the sea dates back to when he began fishing with his brother at a young age. He now has 40 pots and sells his produce to the mainland and for foreign export.

Our promo video ‘Herding Sheep on the Inishturk Hills’ will be going out this Sunday the 24th, so make sure not to miss it.

If you wish to be part of That’s Farming Island Farming Adventures and have any interesting farming story to showcase from your island, email [email protected]

*All filming was completed before COVID-19*

14.5 km west of the mayo coastline soars the rugged island of Inishturk meaning the island of the wild boar. Inishturk is 6 km squared in size, 189 meters in elevation with a population of 60 people.

Rich in archaeological sites Inishturk has been inhabited for over 6,000 years with several beehive huts dotted around the freshwater lake dating back to 1500BC.

Inishturk boasts many intriguing landmarks one of which is the weather-beaten Napoleonic signal tower standing on the highest point offering views of Achill and Connemara.

The natural lagoon at Portoon pier is the perfect place to cool off on a hot summer’s day. You may even meet a local lobster or crab fishermen making their way out to sea in their traditional currachs through the famously narrow harbour entrance.

Inishturk is a natural habitat to a wealth of wildlife such as the peregrine falcon and other colourful seabirds such as fulmars, guillemots, razorbills, and puffins.

From farming on the rugged green hills to fishing in the clear turquoise waters, farming is a way of life for the proud islanders who strive to protect the integrity of the island and build a legacy for future generations.

If you want to get involved, email [email protected]

- Advertisement -
Previous article
What I didn’t expect to learn in college
Next article
VIDEO: Feeling the effects of the weather