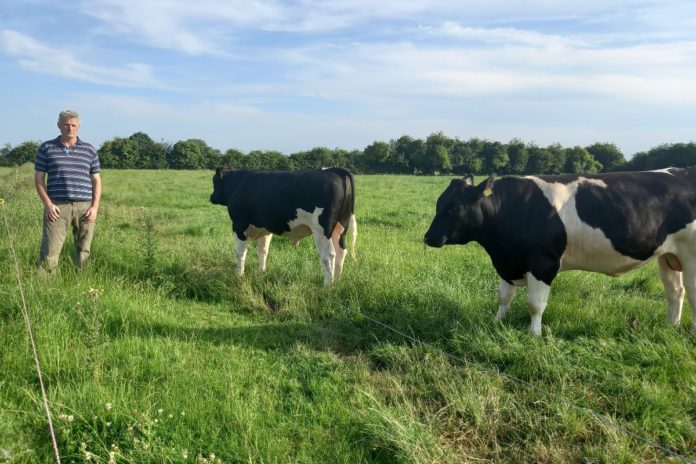 In this week’s dairy segment, That’s Farming, speaks to Phillip Kennedy from the Clogheraily Herd, who farms in partnership with his brother, Noel. Phillip discusses their expansion to a 200-cow herd, genetics from Holland and reducing the farm’s fragmentation.

During the milk quotas era, Clogheraily Farm was home to a 56-cow herd and over the years, along with increasing numbers, the brothers upgraded the herd to pedigree status, gaining knowledge from IHFA members.

The farm consists of 600-acres, 340-acres at home and 260-acres on the out-farms. “My late parents Maureen, and Tom, were big influences on both Noel and I.”

“They put their whole life into the farm, and we owe an enormous amount to our father and mother. They laid the groundworks out for us,” Phillip Kennedy, who is married to Moyra, told That’s Farming.

In addition, the farm completes twice-a-day milking over 90-minute sessions between two milking parlours located on either side of the farm. This ensures the cows can reach the 340-acres from both sides of the platform.

Phillip owns a 24-unit Westphalia milking parlour, with the most recent parlour being Noel’s 19-unit Gascogne installed seventeen years ago.

“When the cows are at one end of the farm, they will be milked from my milking parlour, and when they are at the other end, they are milked in Noel’s.”

“Grassland management is very important. The grass is all we grow; we do not grow crops, e.g. maize or fodder beet,” added Phillip, an IHFA and British Friesian Society member.

Other infrastructures on the farm include Phillip’s 240 cubicle cow shed, Noel’s 120-cow cubicle shed, three weanling and bull sheds. The herd is fed 400 silage bales and 200-acres of pit silage.

Phillip outlined how this fragmentation has been a factor in opting for British Friesian genetics.

“Holstein Friesian would not suit a farm like that. I think British Friesians are great for longevity, have good legs and feet, and are very easy to get in calve. I like that breed.”

“I tried Holstein Friesian for one season, and I sold them all. I went back to British Friesian.”

“Within months of calving, I knew they did not suit my system. So, I got rid of them because they lost condition so quickly after calving.”

“I put a huge emphasis on the quality of the bags and quality of cows legs and feet. It is because we sell a lot of calved cows and heifers.”

“It is very hard to sell anything with a badly shaped bag, so we put a lot of emphasis on the bag for that reason.”

“We put much emphasis on their feet because they are walking so far. If a cow has poor legs and feet, it is culled fairly quickly. We do not want to breed cows like that. Our cows, on average, would weigh 550kg to 650kg.”

“Some of our best cows are small cows. There is no weight of a cow I do not like, but I would not like cows that are way too big. So, some of the best cows we have are small (550kg) with 2,000 gallons of milk.”

Calving begins on January, 20th and concludes on May 1st. Phillip explained why they calve down during these months.

“We usually have grass in February. I started calving around January 20th to give them a couple of weeks to recover. Then, they go out for two hours a day in February or March, depending on weather.”

“Heifer will calve at 2-years of age when they are old enough. We sell 70 or 80 bull calves as pedigree bulls, and send the rest to the factory under 24-months-old.”

“A lot of those calves will go off to the out-farm. Then as the year goes on, cows end up having a bigger and bigger area to graze.”

The breeding season begins on April 20th annually over 12 weeks with four rounds of AI. The brothers use up to 40 different bulls from four AI stations alongside their own British Friesian stock bull to clean up.

“I sell many bulls to people, so the diversity of genetics is very important. I have the same customers coming for twenty years or more.”

“They want to buy bulls that are not related to anything they bought off me before. So, this year, I bought in straws from an AI station in Holland.”

“I make a very big effort to spread out my genetic base so people can buy bulls off me that are not related to what they bought before.”

The history of the Clogheraily Herd is why the brothers cherish this holding and its groundworks built by their parents.

“I always liked farming; it has been in my blood. One of the things I like is that my father did it before me and then his father. So, I am continuing another generation on.”

“I like seeing things done well. I like knowing the cows are in good health and happy and well cared for. So, maybe it is a vocation.”

“I find the springtime hard; you are under much pressure working night and day. It would be great if you could spread the work more evenly over the year.”

“Selling bulls is a very cyclical little business. It could be going well for a few years, and then the trade goes downhill. So, dealing with the cyclicality of it is a challenge.”

“Sexed semen is a threat to the business; it has not affected me too badly yet. You would have the fear that people will switch to sexed semen, and bulls sales might disappear.”

“I think 550kgs is a sustainable output and would be a good yield in a sustainable system. So, your cow will go back in calf, stay in good health, and be profitable at the same time.”

“For the long-term goals, I have two boys, Thomas (8) and Sean (6), and would like to see one of them taking over and for both of them involved.”

“You would be concerned about the impact climate change will have on dairying. However, I would be optimistic they will find solutions to cows producing methane.”

“Maybe, we will have to change feed or our farming practices; that would be another challenge,” Phillip, a recipient of the Tipperary/Waterford Protein Friesian breeders Award, concluded.