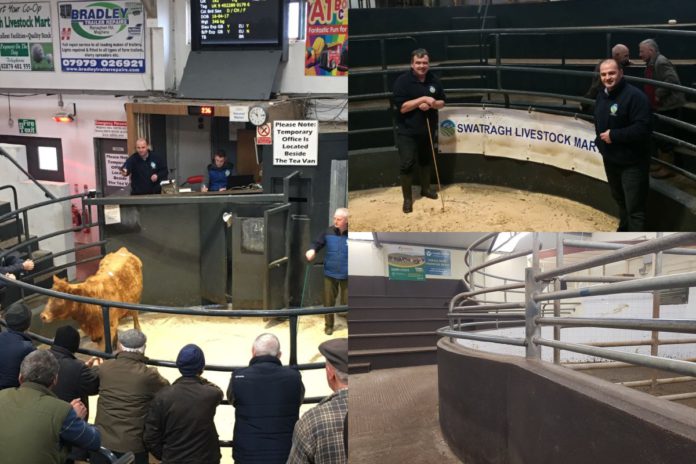 Behind the Hammer: Ciaran Laverty

Ciaran Laverty has always expressed a major interest in livestock marts for as long as he can remember.

Ciaran regularly attended marts, including Ballycastle and Ballymoney, during his early childhood years.

He secured his first position as a drover in numerous marts at the age of thirteen.

“There was a calf sale on in Ballycastle and I could very easily hear the auctioneer selling. I asked the teacher to leave the room to go to the ‘bathroom’. I went down the corridor and open the window to hear the auctioneer.” Ciaran Laverty told Catherina Cunnane of That’s Farming.

“That is when I truly realised that I wanted to become an auctioneer,” Ciaran explained.

Taking a Stand in the Auctioneering Circles

Ciaran continued to relish the idea of becoming an auctioneer, manning the rostrum for the many years that followed.

“After, the auctioneer, Daniel McAlister, had finished selling after every sale, I used to sneak up into the rostrum and turn on the microphone and started selling away. Daniel heard me a couple of times and told me to try it.” Ciaran explained.

Sure enough, as promised, the following week, 17-year-old Ciaran took to the rostrum to sell a pens of store lambs, under the watchful eye of Daniel.

With his eyes fixed securely on the auctioneering profession, Ciaran continued his role as a drover in numerous livestock marts, while running the family’s sheep enterprise, until he was granted a second opportunity.

“One sale, I was around the ring and you could hear the auctioneer; his throat was making it difficult for him to speak. The clerk shouted down to me and said that they were going to need me.”

“I decided that I was going to jump into the deep end and I hopped up on the rostrum. I conducted the sale of 46 rams and it all just took from there.”

Ciaran climbed the ranks and now officiates as as the auctioneer at major sheep and cattle sales throughout Northern Ireland.

“The most satisfying thing is a good sale’s day and seeing the buyers and sellers happy. It is difficult to get everyone happy. You get to meet different farmers.” Ciaran said.

“I remember reading an article a number of years ago and there was an interview with an experienced auctioneer.”

”It said that the main objective of an auctioneer is selling an animal and getting the best price possible for the seller, without robbing the buyer.” Ciaran explained.

“The motto that I have when I am going to conduct a sale is: Don’t stress, do your best and forget the rest.” He added.

“I have noticed that several livestock auctioneers have engaged in a spell of dealing before they made the switch. It gives them a sense of direction and is beneficial when it comes to selling.” Ciaran explained.

“Watch all the action at the marts, the buyers, the sellers and the auctioneers. If you get an opportunity to get up and sell an animal, give it a go. Nobody gets it right the first time or all the time.” Ciaran added.

Ciaran has no intentions to step away from his role anytime soon and is hopeful that his children may follow in his footsteps.

“My daughter has her own toy livestock mart and you can hear her selling every day. My son he is twenty-months and you can hear him aswell. If they want to go on and try it, I am happy to help them.” Ciaran explained.

If you are a Livestock Auctioneer and you want to share your story, get in touch! Email [email protected] and you may just be featured on ‘Behind the Hammer’!