That's FarmingThat\'s Farming Irelands Largest Farming News, Properties and Classifieds Network
HomeBeef‘It will not be too long until you are given a grant... 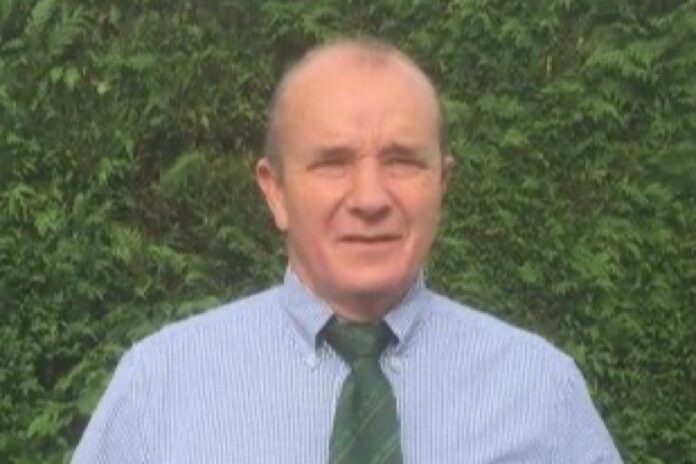 In this week’s Suckler Focus, That’s Farming, speaks to the Garracloon herd. Aiden MacHale, the vice president of the Irish Charolais Cattle Society, discusses breeding the first-Irish bull to be champion in Perth, the advantages of having Charolais cattle, outdoor calving and pocketing up to €9,600 for Charolais bulls.

Aiden MacHale from Ballina, Mayo, claims to be the breeder of the first-ever Irish-bred bull, Garracloon Vidame, to be champion in Perth, Scotland, which went on to sell for $32,000 on Thursday, October 26th, 2006.

Sean McGovern from Northern Ireland secured the Royal Highland Show winner, who is off a Jupiter bull and from a CF52-sired cow, from Aiden for €7,000 at a breed society sale at Carrick-on-Shannon.

He established the Garracloon Vidame pedigree Charolais herd by purchasing a female from Bob Patterson of Crossmolina, County Mayo.

However, it was the purchase of two females, sired by Bower House Topper and Shamrock Ambassador, from his father, Sean, and brother, Raymond, that are the most influential females in the herd, which initially came from publican Mickey O’Boyle.

Aiden built up his herd by retaining replacements and acquiring one in-calf cow, Roxanna Mertelle, and her calf ten to fifteen years ago from France, which came through Pat Stevens from Laois.

He farms ten pedigree Charolais cows on 8-acres he owns and 42-acres of land he rents.

In addition, he used to keep 25 Limousin-Charolais-cross cattle and 80 Suffolk-cross-Charollais ewes but parted with this when the lease was up on the 32-acres of land, which he had for 12 years.

“I was brought up on a very small dairy farm. I was the youngest child of ten, and I was always into cattle,” Aiden MacHale told That’s Farming.

“Honestly, I had no passion for pedigree breeding until I saw my father buying these heifers. I thought they were unbelievable animals, to tell you the truth, and after that, I had a passion for livestock.”

He focuses on Charolais Cattle for size, power, weight, and age.

“My friend, Kevin Maguire, came up with a slogan that Charolais are the only other cattle to improve every other breed, and it has been used worldwide.”

His preferred cow has a “good” head and functionality. “If I do not like her, I will not buy her”.

Aiden is in his fifth year on the Irish Charolais Cattle Society council and took over as vice-president from the late Christy Comerford at the beginning of May 2022.

“I never had the ambition to be vice president, but the council asked me to do it. So, I will go to the World Charolais Congress England for ten days in July. I like seeing other types of cattle.”

“The Charolais breed has never been in a better position. The last two years have surpassed everything with most sales with €4,800 and €4,900.”

Commenting on the breed’s genetic pool, he said: “I think the genetic pool has never been better. If you study it, there is a bull for every type of cow.”

“There are bulls down to 2.2% calving difficulty. They have become really easy calving.”

“The biggest change I have seen in the last five years is that calving difficulty is gone way down, and the maternal end is gone way up.”

“It is the only breed that has changed more than any other breed on them two points, maternally and easy calving. A hard calving bull is no good to no one.” 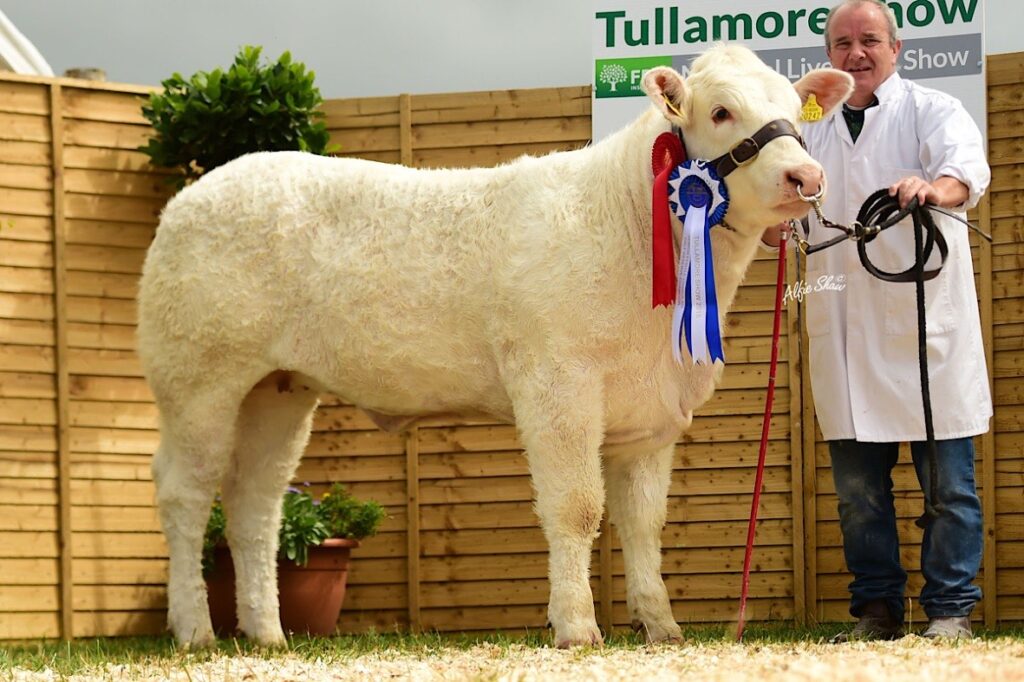 He calves his cows from September to December, enabling him to have more sales with 12-month-old bulls in September, October, and November.

The Mayo pedigree breeder compacts his calving period through management and the use of a teaser bull.

He feels that with cows on slats or woodchips, the teaser bull detects them up faster, which results in higher conception rates.

He calves his replacements at three-years-old. “You want the size, and you want to let them mature. I do not agree with these heifers calving at two-and-a-half-year-old.”

“There is no chance that I would ever let them calf at 24-months; they would want to be coming three-year-old.”

Aiden finds when cows calf outside on the woodchip pad and their diet is correct, and they are exercised, he experiences no calving difficulty.

He also finds it is healthier to avoid health infections, and said they can drift in and out of the shed as required.

“It is a no-brainer. To have them on concrete for 4-5 months and expect them to calf would not work for me.” 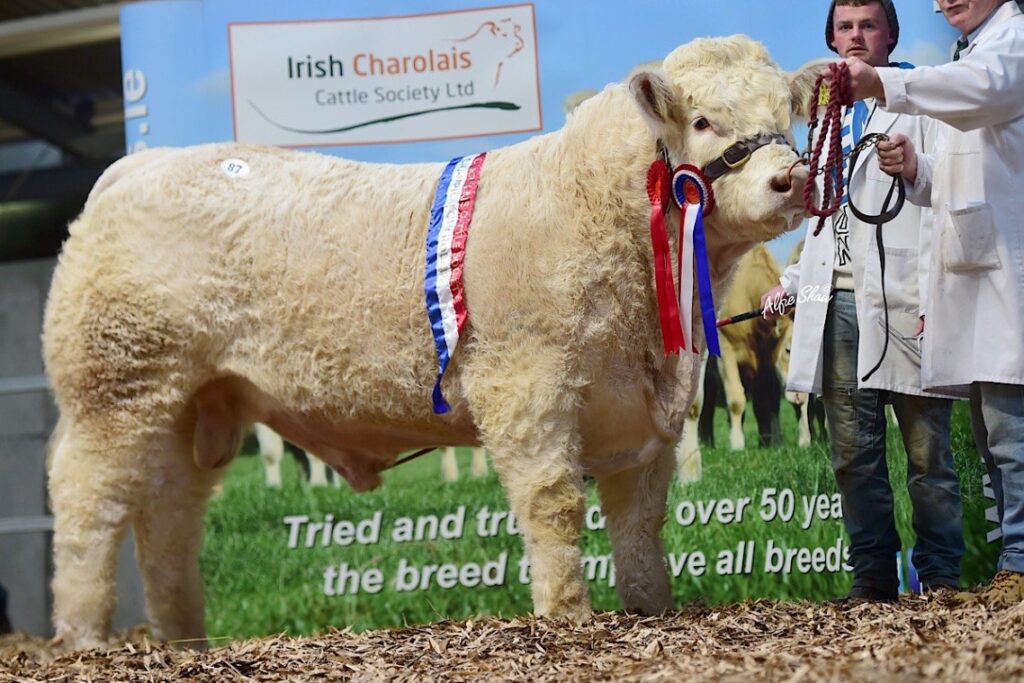 He retains all his heifers and culls cows not breeding in Mayo-Sligo Livestock Mart (Ballina) and sells his bulls from 13-16-months-old at Irish Charolais Cattle Society sales or on-farm.

Aiden has pocketed between €3,000-€5,000 at different sales and won the championship at the Christmas cracker sale four times in the last ten years.

In December 2020, he secured €9,600 at the Christmas Cracker sale for Garracloon Vidame Phil ET.

“In the last two years, there was never a higher demand for Charolais bulls. It is a no-brainer because cattle in the mart are €200 dearer than any other breed.”

“In a 20-cow suckling herd which is a small herd of cows, you are talking €4,000 of the difference in the Charolais bull than any other breed when you are selling your weanlings. That is a lot of money.”

He manages his grassland in a 22-day rotation, as it stands, and bales silage in the first week of June and during July from rented meadows.

The Mayo farmer spreads slurry in March and April and occasionally after first-cut silage.

Aiden explained that while he aims to have 20 pedigree Charolais cows and 20 Limousin-cross-Charolais commercial females, he has no land available to return to this system.

He intends to keep up-to-date with genetics, breed the “best” bull using the “best” cow and always keep his eye on the top.

“I do not think it will be too long until you will be paid for suckler cows and get a grant. Over 300 dry cows are being sold a week in Mayo for the past year-and-a-half.”

“They cannot supply the demand, yet everyone, including the government are saying to cut suckler cow numberss.”

“It will not be too long until you are given a grant to keep a suckler cow because they are not going to be in it.”

“I suppose you have got to be realistic in your thinking but finished cull cows are €1,000 dearer than they were this time last year.”

“Furthermore, I know bagged fertiliser and meal have gone up, but they have not gone up as much as beef. I cannot understand where the demand is coming from; they cannot keep it filled,” the suckler farmer concluded.