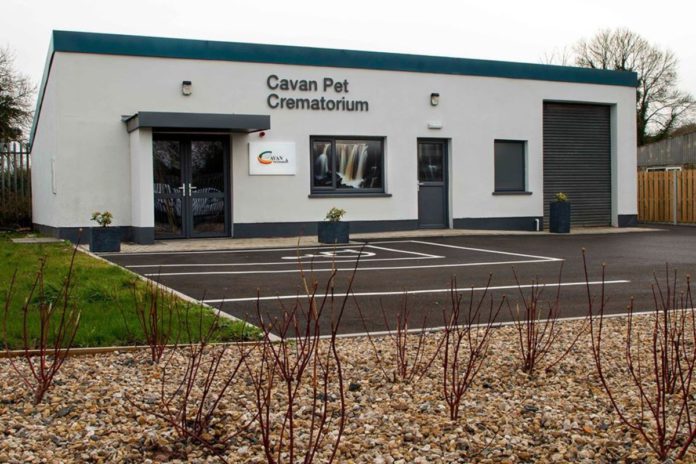 A new facility has been constructed in Belturbet, Co. Cavan, where animal lovers can come to give their beloved pets a last goodbye and have them cremated.

Ralph has been competing in dog shows for many years; he currently shows Clumber Spaniels and won Best of Breed at Crufts 2017 with his dog, Eldridge. The highlight of his career was winning Best in Show with his dog, Garfield, in the centenary year Crufts Show in 1991.

Speaking to That’s Farming, he said: “Having my show dogs cremated over the years has been the norm. I’ve always been very familiar with the process.”

“The initial idea came to me in the late ’90s but timing and circumstances didn’t allow us to proceed. The project was re-visited about 18-24-months ago, so it has been in the pipeline for a very long time.”

“In the past, I would have gone to Belfast and then in recent times I would have used the facility in the vets, but it’s not very personal. I always found cremation to be the ideal thing to do. It’s very traumatic when your pet passes away and it’s a very clean, concise, compassionate way to deal with the situation.”

Using vet’s facilities can often be a long process, according to Ralph, who said this system is far quicker and gives more closure over the situation.

“From the vets, it’s about two or three weeks before the ashes will be returned. For most people, that’s quite traumatic; not knowing exactly where their pet is, where it’s being stored and what’s happening. Human nature, being what it is, people like things being dealt with there and then.”

“The process here would be that you would speak to me on the phone or via email and we would make certain arrangements. Under normal circumstances, without Covid-19, we would arrange that you would arrive with your pet and we would show you to the quiet room where you would have the last few moments with the pet and do the necessary paperwork.”

“Then the cremation would take place, pending on the time slot. The ashes will be ready for collection from 24-36 hours afterwards,” he explained.

This facility has become more prevalent in recent times, with a lot of people living in rented accommodation where they are not allowed to bury their pet. Other people living in apartments don’t have this option either.

The crematorium is not the first of its kind but will serve an area that previously had to travel long distances for the service.

“There are a number of crematoriums in Ireland – this is not a new concept, but it is new for the Cavan, Monaghan, Leitrim, Longford, Sligo, Donegal areas.”

“This is a good, clean way to deal with the issue when your pet dies. People do get great comfort when they get the ashes back,” Ralph concluded.