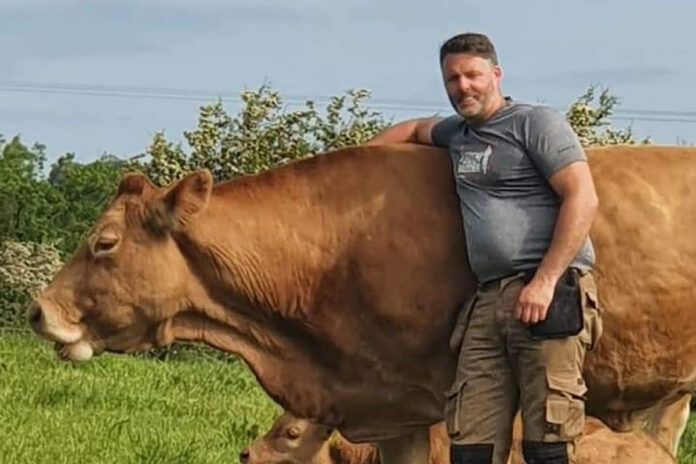 ‘There will always be room for suckler cows’

“I know you see a lot of people getting out of suckler farming. However, I still think beef breeds are far superior to dairy for kill out and are far easier fleshed.”

“I see a future in suckler farming. There are a lot of people turning to dairying, but I feel it will go around in a circle that there will always be room for suckler cows.”

“The dairy sector seems very strong, but when you go into a sale with a good Limousin or Charolais weanling, it is hoovered up for good money.

Those are the sentiments of Thomas Carolan, an optimistic and driven mixed farmer based on the Cavan-Meath-Monaghan border near Muff, Kingscourt.

The family, who farm a 40-acre enterprise, has been involved in the pedigree livestock field for over two decades.

Since the late 1990s, Limousin has been the cattle breed on the mixed farm, with Suffolk the selected sheep breed on the farm under the Muff Limousin and Muff Suffolk prefixes.

They initially had a 12-cow commercial herd and phased out commercial females gradually, which resulted in a herd of pedigree Limousin cattle.

They became interested in the breed through their experience first-herd of its performance in a commercial suckler capacity, having ran a Limousin stock bull with their commercial herd.

Patrick worked off the farm and required an “easy calving cow with good maternal traits”.

His son, Thomas, who works full-time in a local company in Kingscourt, also plays an essential role on the farm.

It was an unfortunate timeline of events – his brother (Michael)’s suicide five years ago – that brought about Thomas’ increased involvement in the family farm.

His ideal breeding female is a “square, has a good temperament and desirable maternal characteristics”.

They also use their stock bull, Wood Road Philip, a Bavardage son they purchased at an Irish Limousin Cattle Society sale in Elphin two years ago.

He undertakes two rounds of AI and mops up with a stock bull, and lets out the stock bull at the end of March or April

“In my opinion, I have to say there are some very good bulls out there within Irish AI companies and plenty of fresh breeding coming in.”

“In my opinion, the advantages of the breed are they are very easy to mind, thrive well, are easy calving, and have good maternal characteristics. Anyone that ever buys a stock bull always comes back happy.”

“Also, when you bring them to the factory, they have great kill-out percentages and are easy to fatten.”

On the farm, most cows calve in March, which enables them to have progeny available for sale at suitable ages and fresh grass available after calving for both cows and calves.

“I feel heifers are not ready to calf until 28-30-months-old, and at 24-months-old they are still growing. So, I feel it gives them a chance to mature in a good cow, good size, and it leaves you very little trouble calving afterwards.”

It is “rare” for him to intervene during calvings, and he uses a combination of calving cameras and Moocall sensors for management purposes.

“I do not find calving to be a significant workload. When I am at work, I can watch cows calving through the camera.”

“My workplace is up to 15 minutes away from the yard and my father available to help if required.”

However, lambing season brings a more intensive workload, as they AI all ewes, which begin lambing from January 2nd.

He takes annual leave from work to lamb most ewes during the first week of January, apart from the repeats which lamb a fortnight later.

The family select their replacements based on their maternal characteristics and size, retaining up to four annually and offer the remainder for sale on-farm.

They also sell pedigree bulls suitable for breeding from the farm gate or at society sales.

They sell others as weanlings at the local mart at around 400kgs, which generally reach €1,000 – depending on mart prices.

“I believe the Limousin bull is popular, and a few dairy farmers purchased Limousin bulls off me for the dairy beef calf.”

“The Irish Limousin Cattle Society is improving their gestation of the bulls, which is a welcomed move. The dairy farmer always goes for an Angus or Hereford bull as they want the cow milking as soon as possible.”

“I believe the Limousin bull is popular, and a few dairy farmers purchased Limousin bulls off me to breed dairy-beef calf.”

The family intends to showcase the herd further at Irish Limousin Cattle Society sales and agricultural shows, with the hope of replicating the success they had on the sheep circuit in 2022.

However, Thomas says his interest “lies more with the cattle” and intends to exhibit cattle at agricultural shows, which his father undertook many years ago before focusing on showing sheep.

“Hopefully, with a bit of luck, I will win a few rosettes. But, I suppose, then, with the pedigree cattle, you want to keep with the breeding; if you have the right animal, you can make the right money.”