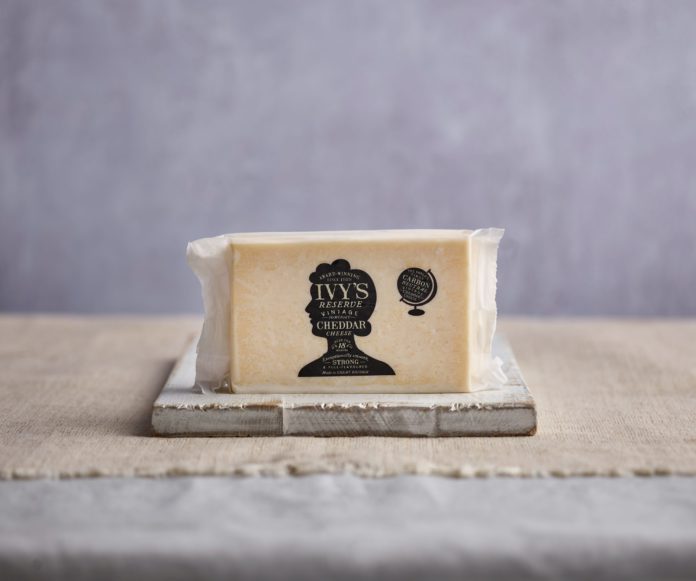 Wyke Farms has launched what it regards as the “world’s first” carbon-neutral branded cheddar cheese.

The independent cheese and renewable energy producer intends to add other carbon-neutral products to its portfolio over the next year.

The first product in this line – its prize-winning Ivy’s Reserve Vintage Cheddar – comes with the “very special” reserve status as the company launches the Ivy’s Reserve range of premium cheddar.

It named Ivy’s Reserve after grandmother Ivy, who, 100 years ago, was the first person to write down her recipe, which they now keep locked in a safe on the farm.

The cheese remained a family secret for many years and was only available as a special gift for family and close friends at Christmas time.

But the farm stated that demand for this “very special” cheddar has “grown and grown”.

In a statement, a spokesperson said:

“Ivy’s Reserve is the best of the best, matured for 18 months under wood to bring out an unmatched ‘rounded’ flavour profile, slightly sweet, nutty, and complex.”

“This award-winning cheddar cheese is everything that a cheddar from Somerset, the home of cheddar, should be.”

Grandmother Ivy used to say, “if you look after nature, then nature will look after you”.

“Today, Ivy would be proud that her Ivy’s Reserve is the first cheddar cheese in the world to be certified as carbon-neutral by the Carbon Trust.”

The carbon-neutral status builds on Wyke Farms’ work in improving environmental performance across these core areas.

According to the farm, this is “better” for biodiversity and soil quality and helps to reduce emissions, bringing the CO2 output per litre of milk to 20% under the national average.

Green energy: Made using 100% green energy, with electricity and gas Wyke Farm sources from its own self-generated solar power and biogas from farm and dairy waste.

According to the farm, an anaerobic digester saves 20 million kilos of CO2 every year. Furthermore, it provides a rich, natural fertiliser that local farms use to displace artificial nitrogen usage.

Conservation: Alongside this work, they leave uncultivated areas to wildflowers and other species. Besides, they plant trees and put up bird boxes and insect hotels.

It committed to energy independence and generating all its gas and electric from renewables.

“Since then, we have invested in our knowledge base across this business and on-farm driving environmental improvement year on year.”

“Ivy’s Reserve is a world first and an industry shake-up. This will continue to be our focus in the years ahead as we push for more net positive improvements,” he concluded.