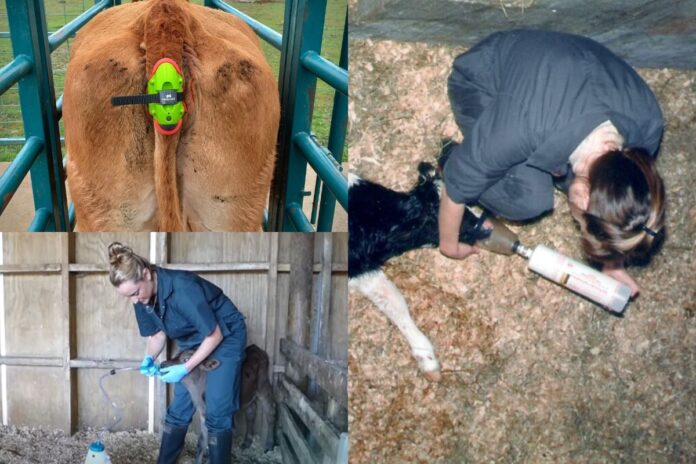 In this article, That’s Farming previews five items that could make your 2023 calving season more stress-free.

This is the world’s first Irish-designed tail-mounted calving sensor which provides calving alerts to farmers via SMS, text or the company’s free-to-download mobile app.

According to Moocall, the sensor connects easily with all networks and phones and there is no need for an internet connection in your shed.

Read more in this article.

Stomach tubing is an art within itself, and one invention that can make performing the process correctly somewhat easier is the Trusti Truber.

New Zealand vet, Ursula Haywood, developed the award-winning Trusti Tuber after finding her clients were reluctant to tube-feed calves due to associated stress and risk of tube misplacement.

Manufactured by Antahi in New Zealand, the Trusti Tuber has been trialled and tested and is now widely available worldwide.

The mouthpiece and tube are easily held in the calf’s mouth using one hand. With the other hand, the 4-litre ergonomically-designed milk bottle can be raised to allow the colostrum, or electrolytes, to flow down the tube and safely into the calf’s stomach.

Further design features include a clip on the side of the bottle to attach the mouthpiece and keep it off the floor, and the transparency of the tube allows better cleaning.

The McCulloch Medical Constant Delivery Calf Aspirator/Resuscitator is the brainchild of Norma McCulloch, who made the handheld device using the same technology as a human unit.

In 1991, McCullough invented, developed, and patented a type of linear displacement manual resuscitator.

The product was manufactured to the international standard for human resuscitators, and Genesis Industries later acquired the line.

This paved the way for what became known as McCulloch Medical and its range of easy-to-use aspirator/resuscitator kits for calves, foals, kids (goats), lambs, pigs and cria (alpacas).

The award-winning all-in-one device is suitable for newborn animals that have a heartbeat but have yet to take their first breath.

According to the creators, you can use this on newborns that have difficulty breathing or are in respiratory arrest.

Read more on this product, which generally retails at €190-€215 through various outlets.

There has never been more choice when it comes to calving cameras, with dozens of manufacturers and specifications.

One possible option is LudaFarm’s FarmCam HD option, which retails at €599.00 (excluding VAT) on its website.

It described this as a “fully water-proof, robust and wireless” camera system that gives you an overview of your farm.

There is an option to connect up to four cameras, which you can watch simultaneously on a single screen.

Moreover, you can record audio and visual, wile its motion alarms issue notifications to your phone or PC if it detects movement outside of working hours.

You can find out more details about its features and connection options via its website.

Thomas Kenny, son of a Co. Kilkenny-based dairy farmer, created this invention as a mechanical aid for easier transportation of freshly-born calves and smaller animals.

According to the agricultural inventor, it helps avoid back injury working on the farm, eliminates lifting and makes transfer easier.

The galvanised calf barrow with puncture-proof tyres retails at €330 on Kenny’s official website.