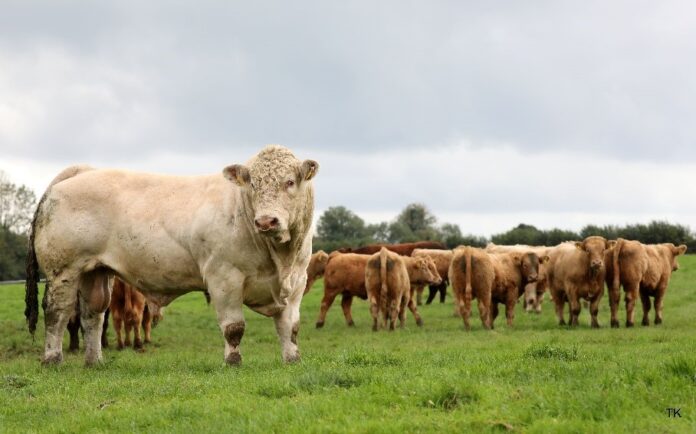 ‘Some bulls that are entered into premier sales are heavily fed’

Many farmers will be on the hunt for a new stock bull in the weeks and months ahead as the first raft of society’s premier sales of 2023 get underway.

By doing so, the bull can acclimatise to its new surroundings, its suitable accommodation and adapt to a suitable diet.

During this stage, the ag advisor also recommends pairing a bull with a female that is standing in heat to ensure that they are “fit for purpose” for the season ahead.

Speaking during one of the state agency’s previous webinars, which focused on bull safety and fertility, he commented:

“Some bulls that are entered into premier sales, ect, are heavily fed. There is no getting away from that as some are on 10kgs+ of meal, so you need to reduce them gradually off that meal and not to cut them off completely.”

“Try to purchase your bull from a reputable breeder or breed society. There are too many bulls the day they are bought, the next day, they could be out in the field with a bunch of cows. That is a recipe for disaster.”

“You do not want your bull going from 10kgs of concentrates to 0kgs. The best thing to do at a bull sale is to ask the breeder what the bull was eating, and hopefully, they are going to tell you, so you can reduce that accordingly over a two-month period.”

“Generally, when an animal goes to grass, you just keep an eye on body condition. Ideally, bulls are going to grass from mid-May onwards, so if there is plenty of good grass, the bull should maintain his body condition, especially if he is a young bull and is not overworked.”

“If he is running with 15-20 cows, there should not be an issue. An issue arises where he is in with too many cows,” he added.

“The point I am making here is that you want your stock bull fit, not fat and look, if you go onto farms, you see a lot of these bulls at the backend of the year, they are shells of themselves because they have lost so much weight.”

Moreover, a bull could lose up to 10% of its body weight during the breeding season. With young bull management, it is important to observe mating behaviour closely to ensure that he is physically large enough to impregnate cows.

During the virtual session, he stressed that a bull is a “valuable” animal that requires “special” care and attention, especially in the first year, to ensure functionality and longevity.

But, he stressed that “it is important not to forget about him after he has finished the breeding season, so ensure that you get him back up in condition”.

Moreover, he added that farmers should never assume bull fertility, as it requires ongoing vigilance, as That’s Farming detailed in a previous news article on our platform.

“If you go out and spend a lot of money on a bull, the last thing you want to do is to send them into the factory,” he added.