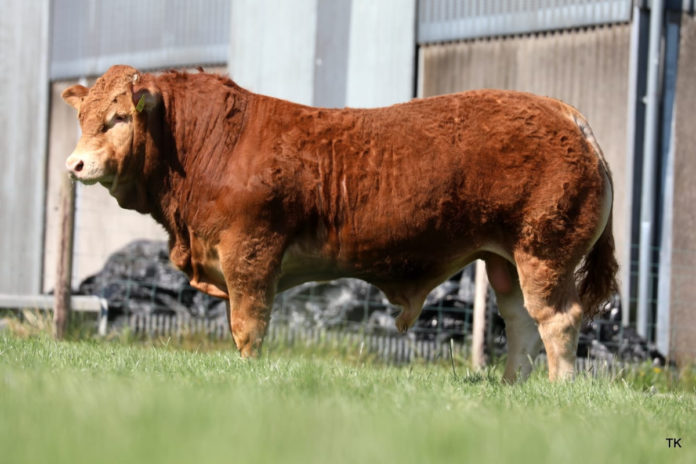 There was a good trade at the Irish Limousin Society Premier online video auction, according to auctioneer, Dennis Barrett.

The top price on the day went for Liverpool Pirate, who was purchased by Mark Phillips for €8,000. It is reported that Phillips intends to use the bull in his U.K. AI company, Limousin Genetics.

Barrett noted that Lot 6 from Ardlea created one of the early battles, as bidding had already begun and the reserve was surpassed before the auction had started. The bull was eventually won by a buyer in Co. Cavan for €6,100.

The third highest price went to Liverpool Peter, who was purchased by Limousin Genetics on behalf of one of their clients, J&S Ward.

Barrett reported that there were 230 registered bidders on the day, with 110 of those actively bidding. There was also a record number of guest viewers watching the auction at 728.

Commenting on the number of people engaging in the sale, the auctioneer said: “It was great to see registrations come in from all 32 counties in Ireland, England, Scotland and Wales, as well as international bidders, logging on.”

For more information on the sale or upcoming sales, click here.

- Advertisement -
Previous article
VIDEO: How many silage bales can you make from a driving range?
Next article
Trump to implement $23 billion (€21.2 billion) relief to farmers