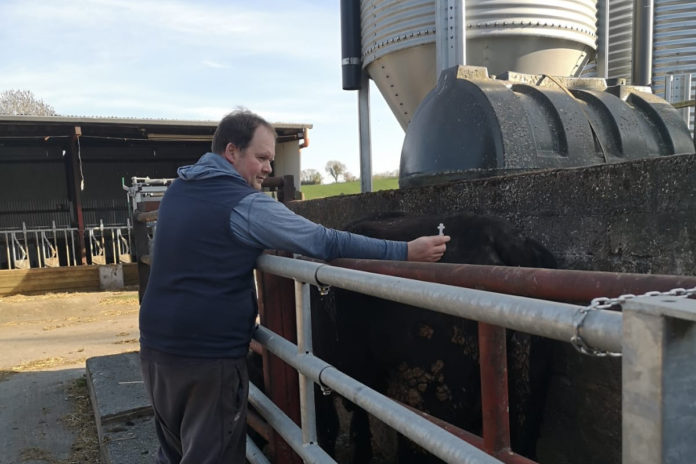 Building a pedigree herd from scratch

His interest in the breed stemmed from his uncle’s dairy farm, where they keep a number of Angus stock bulls.

After taking over the farm from his father-in-law in 2015, Carroll decided that this would be the breed of choice, as he changed the farm’s system completely.

“When my father-in-law had the farm, he was buying weanlings and selling them when they were ready for the factory, or some of them would go to the factory.”

“With the way the beef was at that time, I was buying in weanlings and trying to get them to the factory, but it wasn’t working out.”

Building up the herd

He now owns a herd of 15 black and 6 red pedigree Aberdeen Angus cattle, along with a handful of commercial cattle.

“As I was selling cattle into the factory, I was replacing them with the pedigree Angus. I was trying to buy in-calf heifers, and most of them were only 2 months away from calving, so you had calves on the ground fairly quickly,” he explained.

“It was difficult building up a herd from scratch. I’m still growing, it takes a long time. You can’t just go out and buy a full pedigree herd. I’m at this nearly 4 years and I haven’t had a full complement yet, but I’m not that far away from it.”

It was coincidental that he now breeds red Angus as well. It started when he purchased 2 black cows that were in-calf to a red bull. When the red calves dropped, he liked them so much that he decided he would carry on breeding them.

“There are a few farmers breeding them but they are quite rare and red heifers are very hard to get. Most phone calls I get are from people looking for me to sell the reds, but I don’t want to sell them. It’s like selling the golden goose.”

His plan is to have 10 red and 10 black females on the farm, with some commercial cattle as well. Farming on 50-acres, he said that will be the extent of the growth of his herd with the land that he has available.

In order to get to his desired number, the Monaghan farmer will breed from within. His breeding strategy consists of a mixture of AI and using the stock bull.

He purchased a red Angus stock bull a few years ago and uses him on the cows. The heifers are served by the best of the weanling bulls before it is sold off the farm. Brian tries to use AI where possible, but with family and work commitments, this is not always possible.

He calves all-year-round, a system that he explained is more suited to his lifestyle than compact calving.

“I know some people will say you should be calving them all in two months, but it doesn’t work for me. With work and everything, I can’t cope with a lot of them calving at the once, whereas if you have one or two every month or whatever the case may be, that steady flow suits me better.”

With an off-farm position on a swine enterprise and a family at home, the farm has been an added commitment and a lot of hard work has gone into getting it to its current state. However, Carroll said that his love for it meant that the added responsibility is never a burden.

“If the enjoyment wasn’t there, I probably wouldn’t do it because the financial return isn’t there. It’s a bug – you either love it or you don’t.”