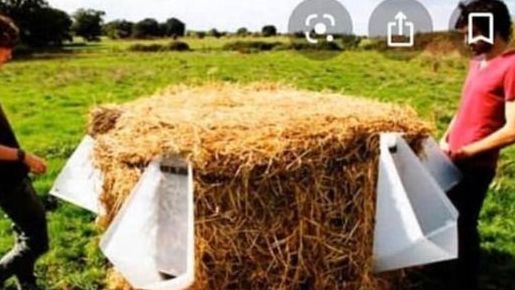 A bride-to-be, who is hoping to create a ‘hay urinal’ for her upcoming wedding, has been criticized online.

In an anonymous post on Reddit, the user shared an image of the DIY idea that she wishes to re-create.

“Hi, I am hoping to create a “hay urinal” for my wedding in a few weeks,” the post reads.

“Hence I am chasing one round of hay roughly the size in the picture. Obviously type of hay and quality aren’t important, just looking for something cheap. Thanks!” the post concluded.

One user responded by saying: “That’s gonna smell like death by the end of the night.”

“You could probably smell that thing from a distance too, like during the first dance at the reception.” another said.

“This is a horrible idea and what a waste of good hay (actual hay farmer here).” another user added.

“That’s actually a neat idea. Wouldn’t do it, but it is neat.” another user responded.