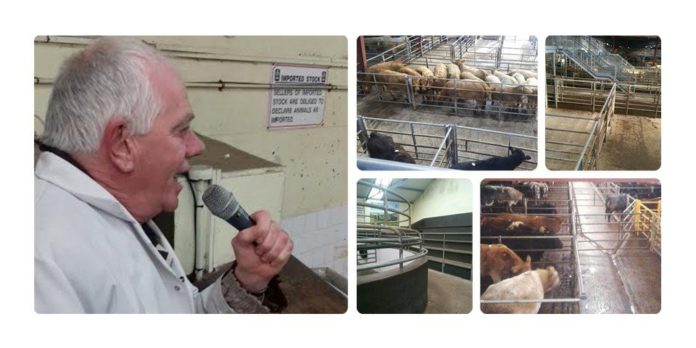 Anyone that happens to drop by Aurivo Balla Mart in the west of Ireland on a Saturday, will undoubtedly be familiar with the name Brendan Corrigan.

The Ballinamuck, Co Longford native is no stranger to manning the podium in the popular’s mart cow ring each week.

Having tended to his suckler herd, Corrigan has been making the 140km journey to the West every Saturday morning for the past twenty-seven years.

Brendan first found his feet in the livestock mart scene forty-three years ago.

He initially worked as a clerk from the days Mohill Mart first opened its doors in 1974.

“I then went on to clerk at marts, including Cotehill, Co. Cavan and Granard, Co. Longford. Six years later, I started auctioneering in Cavan, selling suck calves. A further five years later, I went to Ballymote , Co. Sligo auctioneering on Wednesdays and Thursdays.” Brendan told Catherina of That’s Farming.

Not stopping in his tracks there, the opportunity arose for Brendan to uptake  positions with various marts.

“I covered Gort, Westport, Swinford, Ballymote, Balla and Ballyhaunis, six days a week auctioneering. It was a rather busy schedule to follow,” he added.

In 2001, Brendan secured a position with the Department of Agriculture, Food and the Marine as a livestock valuer.

He travelled the width and breadth of ten counties across the island, following outbreaks of Food and Mouth, TB and BSE and continues to undertake valuations on its behalf.

The company, Re/max, operated in a Longford-based office for several years and later formed a partnership with a company in Athlone and Birr.

Brendan, a qualified award-winning auctioneer, is now an estate agent for Central Auctions.

It boasts a professional portfolio of land and residential properties, with its main office in Birr, Co. Offaly.

He is a bonded member of both I.P.A.V. and M.C.E.I and continues to officiate as a livestock auctioneer and valuer for the DAFM.

Corrigan stressed that livestock marts are the social fabric of rural Ireland.

And this particular Longford man can recall some of those.

“There has been a closure of smaller trading marts, resulting in the development and expansion of larger marts, with increased catchments areas.”

”Agents are now appointed to purchase stock, with very few farmers at ringsides themselves,”

“It is difficult to know what the future has in store for the sector,” Brendan explained.

“There are very few young people on the farming scene in my neck of the woods, never mind stepping near a mart. They are nearly daunted by the way marts operate when they step inside their doors,” he added.

“Licencing and qualifications are among the areas that have undergone change in recent years. Licence renewal and insurance make the profession challenging.”

“They aren’t many young people uptaking auctioneering at the moment. As a result, a lot of auctioneers have to stay on until their seventies as a result.”

“It is a competitive sector and you have to work to make your mark,” Brendan concluded.

The Longford man does not plan on hanging up his boots (and white coat) anytime soon and will continue to fill the shoes of a livestock auctioneer, estate agent, farmer and DAFM valuer for the foreseeable future.

- Advertisement -
Previous articleFG to work with farmers to ‘improve viability’ of dairy calf-to-beef systems
Next articleVIDEO: ‘I’m going to have to do a rain dance’ – Jests