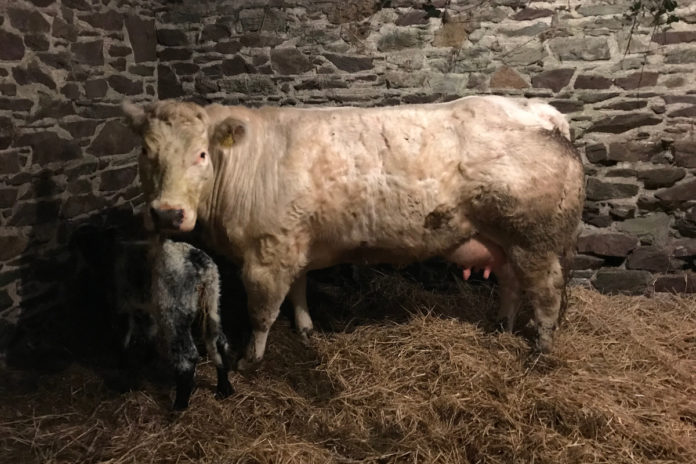 Belgian Blues are the breed of choice for part-time suckler farmer, Jimmy Staples, who owns and manages a pedigree herd under the ‘Cregg’ prefix.

The Staples family has been farming the land in Ballycogley, Co. Wexford since 1740, according to Jimmy’s father, who still assists with the running of the enterprise.

Cregg Farm, a mixed suckler, drystock and tillage enterprise, is home to pedigree Belgian Blues and one pedigree Parthenaise heifer.

“I would have been finishing mostly Belgian-Blue-crosses up to a few years ago, but they were getting harder and harder to come by,” Jimmy explained to Catherina Cunnane, editor of That’s Farming.

Over the last number of years, the family have finished Limousin-crosses and Charolais-crosses, but Belgian Blues continue to dominate the pastures. “I always liked the blues. They are great animals, are easy to work with, have fantastic growth rates and feed efficiency.”

“You will always get a premium price whether you’re finishing or selling in the mart,” he added.

Jimmy has three pedigree cows/heifers which should be calving in January and a number of recipients which are due in September.

Docility and functionality are key traits that he focuses on when selecting sires for his herd which uses 100% AI.

“I would rather have a bigger cow that can carry herself well – there is no point in having a nice flashy animal around the place if she can’t walk.”

“The blues are great mothers I have found with plenty of milk.”

Heifers that make the mark for breeding are selected as replacements and remain on-farm, while bulls are sold for breeding purposes if they meet the standards set out by Jimmy.

“Anything that doesn’t make the grade will be sold as a weanling or maybe at a fatstock show.”

“I’d aim to calve heifers down at 30-months as the blues are a bit later maturing than other breeds. I don’t like trying to push them to calve any earlier.”

“I have a strict culling policy – Anything that is poor on their feet or is any bit wild is culled. It’s not worth the risks.” explained the Irish Belgian Blue Cattle Society (IBBCS) council member.

Satisfied with the current size of his herd, the suckler farmer has no expansion plans in the pipeline.

“We will see what calves come through in the next 12 months and if one is suitable, I’ll hold on to her.”

“Breeding pedigree Blues has a steep learning curve I’ve found. I have no one area selected to focus on – I want to keep improving the herd in as many areas as possible.”

“I love working with cattle. It has its ups and downs, but it can be greatly rewarding.” Jimmy concluded.