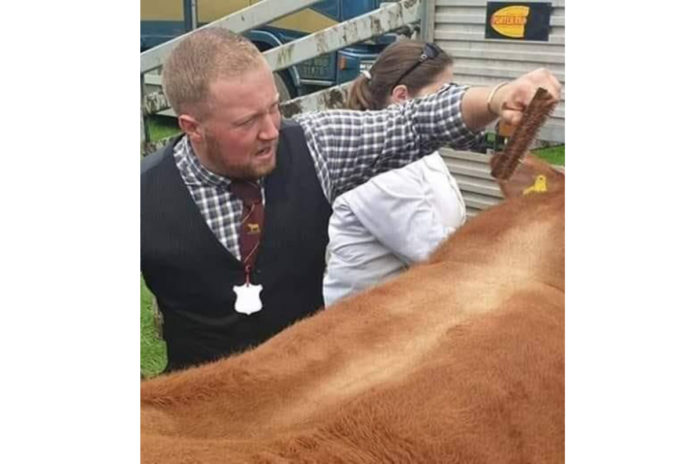 Farming has always been a part-time hobby for Eamon McGarry, who worked as a bricklayer for eight years after leaving school.

McGarry worked on some of Northern Ireland’s best-known farms, including the Jalex Herd, property of James Alexander and the Springfield herd of Libby Clarke, before carving out a career in the bovine genetics field.

The well-known show exhibitor farms on a part-time basis on the foothills of the Divis Mountain in Dundrod, just outside Belfast and works as an AI technician.

“I have been involved in farming from a young age, and have always had a great interest in growing and improving my herd,” he explained to Catherina Cunnane, editor of That’s Farming.

“It has been a family-run farm for just over 25 years. We started off with a few whitehead crossbred cows and a pedigree Blonde herd was established years later.”

The breed was initially chosen by the family for its ease of calving, temperament, ease of management, and conformation.

There are now fifteen breeding females on the farm, a herd size that McGarry is satisfied with, given the nature of his full-time off-farm position.

Down through the years, Eamon and family have always used both stock bulls and AI sires to breed progeny of superior genetic merit.

“This allows one to always try to improve the herd year-by-year and attempt to breed the ‘perfect animal’ if there is such a thing.” explained the owner of the Budore herd.

“I like breeding cattle that catch your eye as soon as they walk into the field or ring, animals that carry width from the pin bones and carry power right through the back to her shoulders.”

“My ideal animal also has a good spring of rib with good depth in the chest and carries the depth throughout.”

“The hind-quarter must have good plates, width and carry down the leg well.”

Over the years, the family have aimed to calve a number of their cows in January ahead of show season.

“Then we would also calf around April so the young calves can be let out straight to grass in the summer months.”

“We always try to keep one or two calves every year for breeding and whatever isn’t good enough in my eyes is then de-registered and sold through the local mart – I can be a perfectionist at times.”

Eamon has a keen interest in exhibiting cattle at agricultural shows and has been successful in doing so for over two decades now.

He has claimed both breed and interbreed championship titles at the majority of NI-based shows. “I hope to be able to branch out and be able to participate in the Royal Highland show someday.”

“There is nothing more than we, as a family, we look forward to more than getting out to Balmoral every year and catching up with everyone again.”

“Most people on the show circuit are just one big family and would never see someone stuck.”

Balmoral Show 2016 will remain in the McGarry family member’s minds for some time, as they scooped both champion and reserve champion silverware with two junior heifers.

“It was nice for my dad to get that because in April 2017, he passed away at 51 years of age from a massive heart attack.”
“This hit the Blonde Cattle Club very hard at the time. They went on to raise funds for the charity, Chest Heart and Stroke.”

“In 2017, we got the green light from Balmoral Show to put up a trophy in his name for the Junior Blonde Champion. The first year it was won by the Rodgers family.”

Eamon is committed to sharing his expertise with fellow breeders, a passion that has brought him all around Ireland and the UK, clipping beef cattle for shows and sales.

By doing so, he has helped breeders to take championships at Balmoral Show, Royal Highland Show, and the Borderway Mart Beef Expo, to name but a few.

“There is nothing I enjoy more than taking as long as I can to make sure the animal is perfect. I have been known to spend hours upon hours on the one beast to ensure that not even a single hair is out of place.”

Eamon also shares his knowledge and experience with dairy and suckler breeders through his role as an AI technician for AI services, which sees him cover both Co. Down and Armagh.

“It is nice to get out and about to meet new and old faces,” explained Eamon, who moved to fill this position in January 2020.

“I enjoy seeing the stock from farm to farm and having a good chat and laugh with customers.”

“A lot of the time, there are farmers out there who I am the only person they would see from one week to the next and are glad to chat.”

“I have always been a big fan of bovine breeding and being hands-on helping beef and dairy farmers through genomics to get the best out of their herd.”

“I help them select bulls to suit their breeding plan and to match the traits they are seeking within their herds so they can keep moving forward.”

Eamon, a dedicated farmer, and AI technician, is uncertain about the future of farming.

“To, me the future of the smaller suckler herd is unknown with production costs rising. With so many restrictions in place, it can definitely make things a lot more challenging to sustain a beef herd.”

“The importation of beef of lower quality from other countries at cheaper rates is another major challenge.”

“Where I am based, renewable energy sources are pushing the price of rented ground through the roof to a stage where an ordinary suckler farmer cannot match.”

“In cases like those, they more often than not will end up having to either cut their numbers of stock or sell them off,” Eamon concluded.

All images supplied by Eamon McGarry