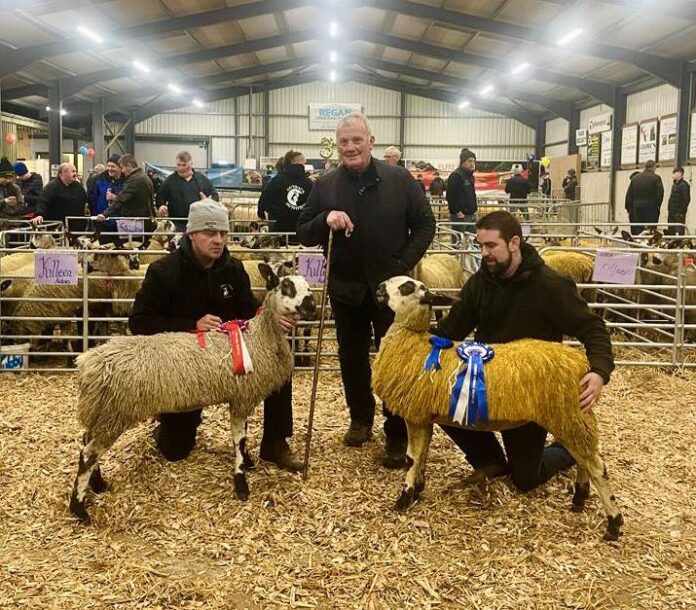 “Purchasers more cautious in the amount they were willing to part for the sheep of their choice” at the South of Ireland Bluefaced Leicester Club’s final sale of 2022 at the Showgrounds in Carrick-on-Shannon on Wednesday, December 28th, 2022.

That is according to a spokesperson for the club, who reported that “there was decent interest in the better types on offer” at the sale, which some of the region’s top flocks attended.

Judge on the day was John Holden of the Blairmount flock in Co. Antrim.

In the shearling ewe class, he found his 1st prize-winning sheep in John Morahan’s Woodview Farm pen. His choice was a K007 Burnbank-bred ewe, in-lamb carrying twins to a home-bred M001 Woodview Farm.

He awarded the 2nd prize-winning to an entry in the pen of Adam Killeen’s Maltpool flock. Picking up the silverware was an N001 Drummuck-bred ewe purchased from the Firmount Flock last year and who was in-lamb to P001 Clogher carrying three lambs.

It was in the ewe lamb class that Judge John Holden found his first prize and champion of the show, in the pen of Paul Sammons’ Firmount Flock, a lamb bred by P002 Giants Causeway.

This lamb caught the judge’s eye with her “clean colours and overall presence in the show ring”.

The second prize, ewe lamb and reserve overall, was found in the Clogher Flock owned by Jonathan Wall. This lamb “showed plenty of power and clean colours” and was bred by K001 Woodview Farm.

The top price of the day went to Jonathan Walls, with his reserve champion lamb, which sold to Paul Sammon for €660.

A 6th place lamb in the pre-sale show exhibited by Aidan Killeen of the Ballinchalla flock was snapped up at €600 by David Love, Co. Donegal.  This lamb was bred by a home-bred sheep of Aidan’s, N001 Ballinchalla.

Tom Staunton’s pen pre-sale 4th-place ewe lamb sold for €540 and was got by N004 Drummuck.

Last in the sale was Joe Scahill’s Faughburren Flock, which saw a P003 Braeburn-bred lamb sell for €480.

“It is encouraging to see how Bluefaced Leicester Sheep have progressed since the club formation.”

“Of course, it is their crossbred offspring. The mule that makes our rams beneficial to all sheep breeds, and we are indebted to the individual farmers and mule groups across the country who use our sheep.”

“These are the people who are paramount in the progression of our breed. We thank each and every one of you,” the spokesperson concluded.