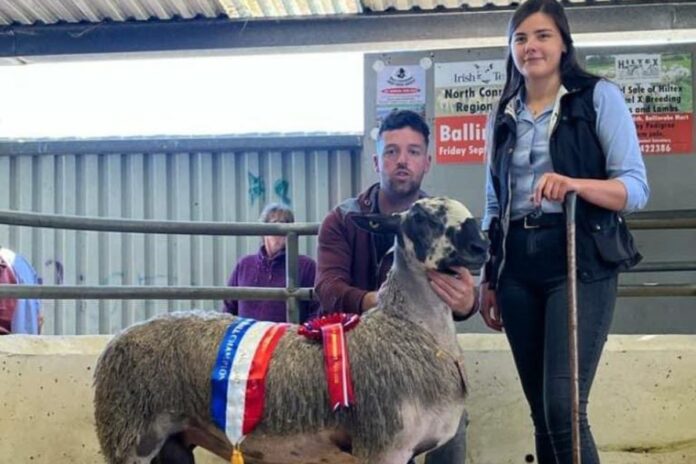 Leading the charge was a first-prize ram lamb exhibited by John Morahan of the Woodview Farm Flock, which judge Shannon O’Kane from the Mullaghwee Flock in Antrim tapped out as her champion earlier in the day.

This “powerful and coloured” lamb was got by L019 Lakeview Farm and went on to sell for €2050 to a new breeder, Charlie Tector.

This “stylish and powerful” sheep was got by N001 Drummuck, a ram with “great” influence in the Firmount Flock presently. She changed hands for €800 and now heads to Shane O’Haire of the Uilliam Flock.

Other top calls on the day were recorded for a shearling pen, property of Tom Staunton, Maskview.

A shearling which he purchased last year as a lamb from Dominic McCrystal, P011 Drummuck, made for €1,600 and sold to Danbywiske Limited.

Maskview’s top lamb R001by N009 Temain fetched €2050 after being snapped up by the flock of George Love in Donegal.

Aidan Killeen of the Ballinchalla Flock presented a selection of aged and shearling rams.

Joe Scahill of the Faughburren flock put his R003 lamb by Temain N009 under the hammer to Johnny Paterson’s Golard flock in Donegal at €1900.

Meanwhile, Leonard Fawl of the Parkalough Flock secured €1,650 for his R002 ram lamb bred by N003 Starbog for €16,50, with Peter Ward being the last bidder here.