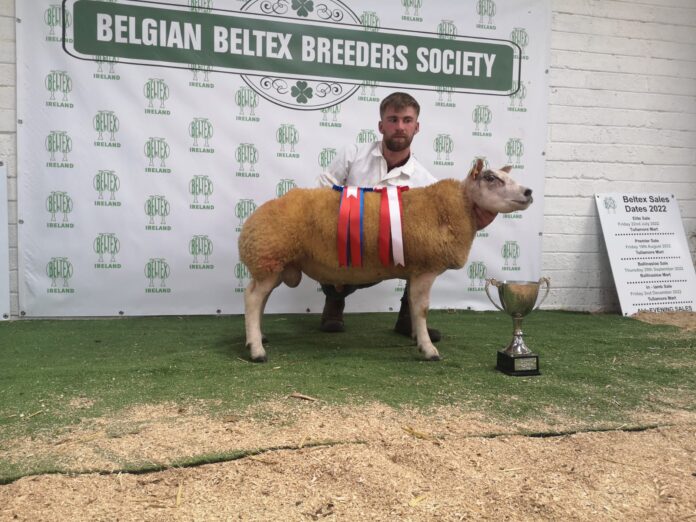 The €3,400 Hillwood He’s the One smashed the previous Irish price record for a Belgian Beltex when he went under the hammer at the society’s elite sale at Tullamore Mart in recent days.

That is according to a spokesperson for the Belgian Beltex Breeders’ Society of Ireland, who said that Friday, July 22nd, 2022, will be “remembered for years to come”.

Hillswood He’s The One was the sale’s champion ram lamb and overall champion hailing from the Hillswood flock of Tom and Thomas Kenny.

Their shearling ram, shown and sold by Brian Mathews, was awarded the shearling ram and reserve champion on the day also.

The judge on the day was John Harbinson from the Glenkeen Flock, Limavady and a total of 14 rams were presented forward in both the lamb and shearling ram classes.

He said that all “sheep of a very high standard, whilst the shearling ewe class did not disappoint and almost saw a full clearance in the later sale”.

Other prices of interest include:

“The elite sale is the society’s earliest sale of the year and offers pedigree Belgian Beltex breeders a fantastic opportunity to purchase breeding stock at an early stage in the year.”

“It was no surprise from early on Friday afternoon that both sale averages and clearance rates would be high as a fantastic standard of sheep was put forward in all three classes,” the spokesperson added.