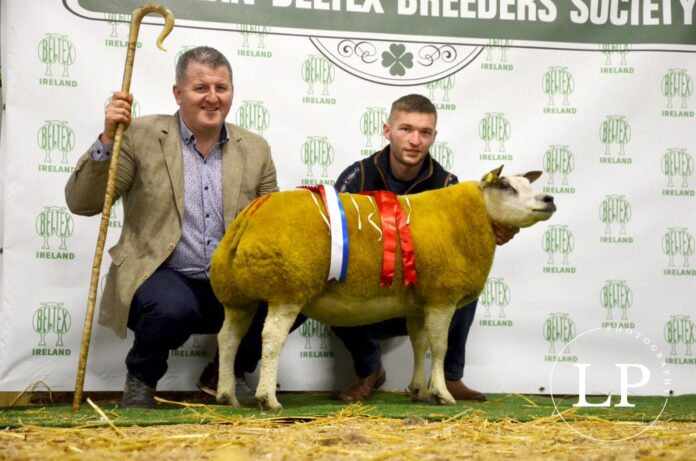 The 2022 Belgian Beltex Breeders’ Sheep Society in-lamb show and sale capped off what has been a “great” year for the society as the breed continues to grow from strength to strength.

That is according to a spokesperson for the society, who reported that the sale at Tullamore Mart saw a “great” demand for the breed.

The included consignments of stock from breeders across the country with bloodlines from “the best the breed has to offer”.

His chosen champion and reserve champions commanded the highest prices on the evening.

Declan commented that “this was a super female sale and that the stock presented were superb”.

The sheep, sired by Matt’s Ferrari, and scanned carrying a single to Ardstewert Geronimol, later sold for the top price of €1300 to Amy Ryan from Shrule, Co. Mayo.

The ewe lamb by Buckles Fizzy Pop, later sold in the ring for €1,100 to Brian Mathews, Co. Offaly. 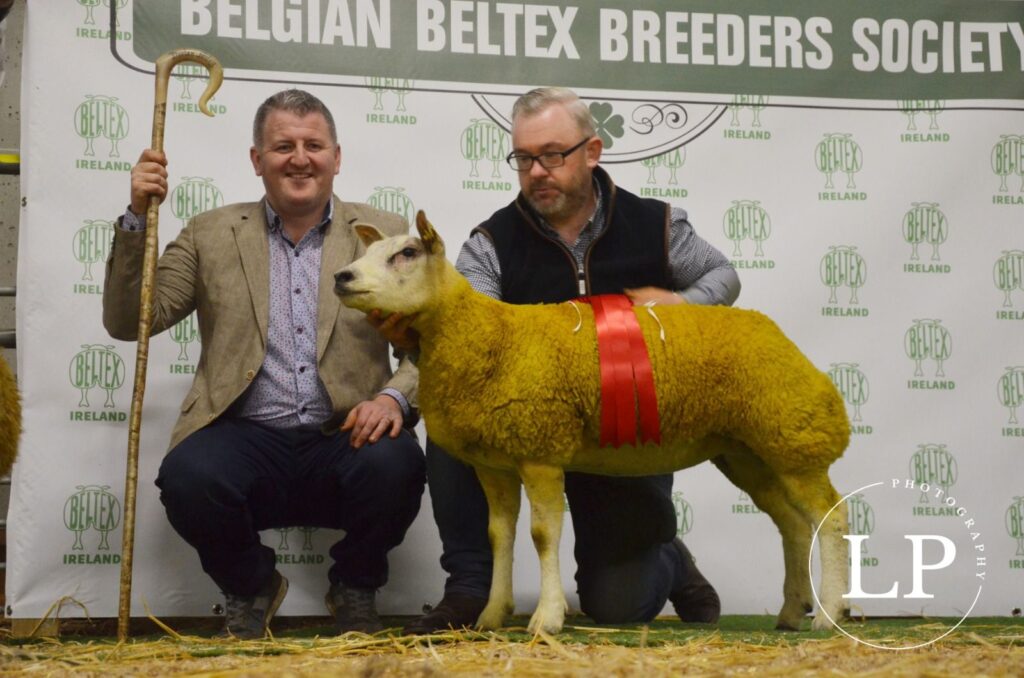 John and Dudley Maher had success in the aged ewe category, with Ballinakill Everything taking first prize.

Sired by Broughton Pound Stretcher and scanned in-lamb to Boherawillin Bascule, she fell at €800 to Jimmy Burke, Co. Mayo.

Full show results are as follows :

The spokesperson added that sale that followed saw a “phenomenal” clearance of the females forward selling to a top price of €1300.

They noted that there was “lots of interest from new breeders, which resulted in a very high clearance rate for all females”.

“The sale featured a number of buyers that are new breeders. This was another highlight of the Beltex Society this year.”

“It was a fantastic indication of the continued growing interest and awareness of the Beltex breed, and it bodes well for 2023 and the future.”

Hogget ewes saw a staggering average of €689, which is an increase on last year’s sale average.

The spokesperson understands this to be a record average for an official Irish Belgian Beltex Breeders Society Sale in Ireland.

Lots 31 and 32 from Alan and Sean Cuddy’s Aughduff flock sold for €750 and €760 to Laois farmers, Jason Bourke and Patrick Hogan, respectively.

Lot 36 from John and Dudley Maher also made €850 and now heads to Ed and Sheena McCarthy, Co. Cork.