Beef Shorthorn judging saw a “packed ringside of spectators treated to a truly first-class performance” at this year’s Balmoral Show.

Although entry numbers were not as high as in other years, the quality in each class was “exceptional”.

Judging was in the capable hands of Carolin Ivinson, who runs the Sandwick herd in Penrith.

Their homebred daughter of Creaga Malibu caught the judge’s eye as soon as she stepped into the ring. The judge described her “as an excellent heifer with tremendous breed characteristics and style”.

Stephen Williamson and Mervyn Robinson led the Cherryvalley team with a “super” lineup of cattle.

Also, the reserve champion came in the form of Glebefarm Duchess Molly M606, which Alfie Shaw and family, Dungannon, exhibited.

This three-year-old cow, a daughter of Fear Jumpstart, was accompanied by her smart heifer calf in the show ring. This is the first year for decades that the Glebefarm prefix has shown at Balmoral, with the Shaw family earning several awards.

Chris and Emma Clarke secured the junior championship silverware with their yearling heifer, Magherone Lizzy Primrose. Bred by the exhibitor, this August-2020-born heifer is by Fearn Godfather.

The judge tapped out Glebefarm Jackie Picture Perfect, out of an Uppermill cow and by Bushypark Jumbo, as reserve junior.

David Alexander won the young bull class with a “well-made” Glencloy Callum son and out of their Smallburn Fifi cow.

Besides, the best pair of Beef Shorthorns from one exhibitor were Glebefarm Duchess Molly M606 and Millerston Jamboree from the Shaws.

Lastly, the Beef Shorthorn breed also had success in all native interbreed championships. It secured reserve titles in pairs, a group of three and a team of five events.

A spokesperson for the society said:

“We wish to congratulate Northern Ireland Beef Shorthorn breeders on a superb entry of top-quality cattle at the recent Balmoral Show, which made its return in glorious sunshine after an absence of over two years.”

“In what we can only describe as an upbeat event, cattle exhibitors and visitors were delighted to be back at Balmoral Park.”

“Furthermore, the interest in the Beef Shorthorn breed at Balmoral Show was fantastic,” the spokesperson concluded. 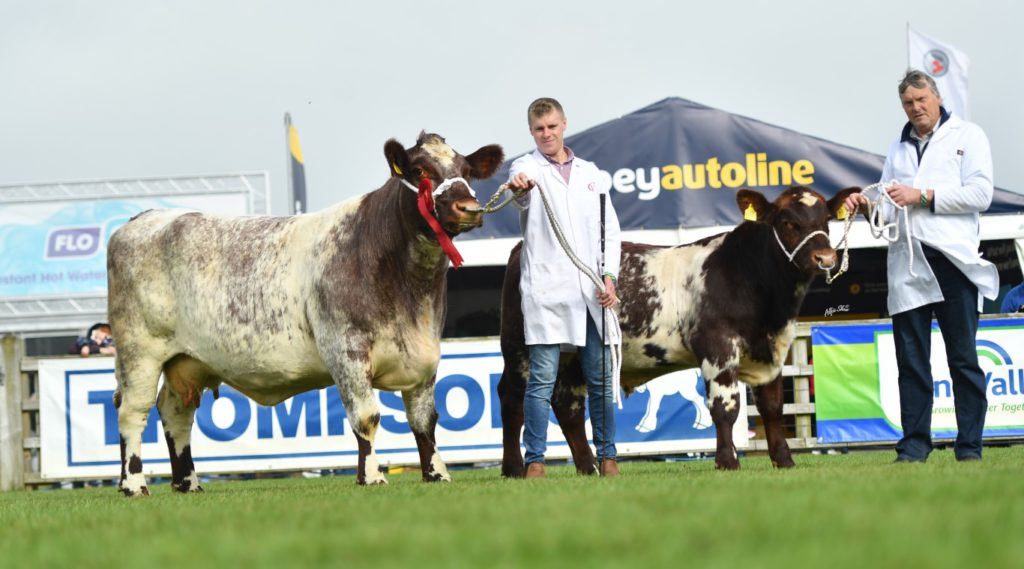 Note: All photos in this article from Alfie and Kathryn Shaw (Agriimages)