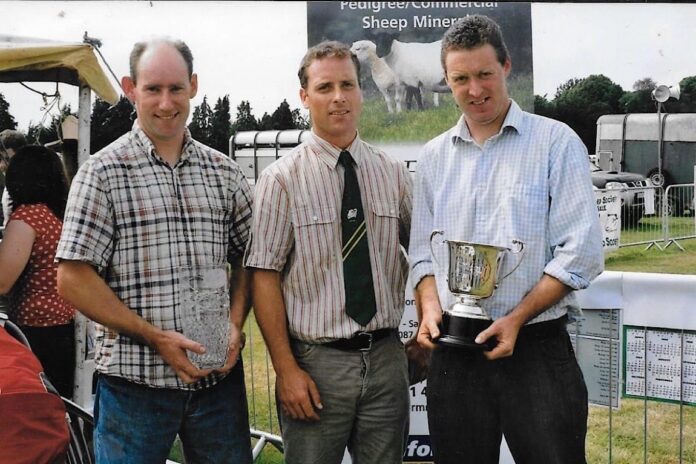 In this week’s sheep farming segment, That’s Farming, speaks to the Bawnard flock. Jim Jeffery discusses farming with his brother, taking over the family farm, why they use four sheep breeds, using five rams, achieving up to €7,000 for rams and completing over 60 ram sales annually.

“We are getting the same farm gate prices for the last ten years.”

Those are the words of full-time pedigree sheep breeders Jim and Frampton Jeffery, who have bred sheep for over 30 years and pocketed up to €7,000 for rams.

The Midleton, County Cork brothers operate a mixed enterprise over 125-acres, which they took over from their father, Jim, during the late 1980s.

They later formed an official farm partnership and, thirty-five years ago completed their Green Cert at Midleton ACOT Teagasc centre.

The enterprise consists of 70 Charollais, 40 Suffolk, 20 Texel, three Oxford Down sheep and 100 Hereford and Angus-cross, and continental cattle.

They slaughter their beef cattle annually, which they send to Dawn Meats, Charleville, or Dawn Meats, Waterford and sell some stores through Cork Marts.

“We always had livestock and had cousins involved in farming. All my cousins have livestock on a commercial basis and tillage, with farming passed down through the generations,” Jim Jeffery told That’s Farming.

“We were always out on the farm and giving a hand. There was always something to be done.”

“For example, when we were very young, a lot of straw and hay was made with small square bales, and we would give a hand drawing them in.”

The brothers run all their sheep under the Bawnard flock prefix. In 1964, their father, Jim, established their pedigree Suffolk flock from five ewes from Smith-Barry Estates.

In 2000, they founded their Charollais sheep flock with ewes from Ruth Kelso and Marion Lysaght.

Eight years ago, they began their pedigree Texel flock by acquiring five ewes from pedigree sheep breeders Michael and Joe Byrne. Their uncle Alec established the Oxford Down flock in 1925.

They purchase some females annually to introduce new bloodlines to their Suffolk and Charollais flocks.

Their preferred sheep has a “good” tight skin, length and “good” mobility.

The family chooses the Suffolk breed for their growth, Charollais for ease of lambing and grazing abilities and Texels because of their hardiness and maternal abilities.

The brothers have some clients who buy Oxford Down Sheep because of their “hardiness” and ability to put on weight “quick”.

“All the sheep breeds have their own attributes that they stand out in.”

“We strive to produce a ram that will produce commercial fat lambs that a farmer is happy with. That is our goal selling as pedigree breeders.”

They use different sheep breeds to suit buyers who put them on different types of ewes.

The brothers said an example of this is using Suffolk rams on white coloured ewes and Charollais and Texel rams on black coloured ewes.

“We have done some hybrid breeding, but there is a very limited demand for them. The pedigree sheep breed is the more consistent progeny. We now breed everything pure.”

“Going forward, we will continue our breeding program as we are at the moment unless there is a drop off in demand for a particular breed.”

The brothers use all stock rams and a Charollais-cross teaser ram to get ewes cycling.

The brothers introduce teaser rams to the pastures on July 26th and let stock rams out on August 10th for four weeks.

According to them, 95% of the ewes cycle in the first three weeks.

The stock rams they use include Ralahine Rogue, which they purchased in 2019 at the Irish Charollais Sheep Society premier sale in Tullamore Mart from the O’Leary family, Clare, for €1,650.

In addition, they use a Charollais ram, Tomgarrow Walkabout, that they acquired at the Irish Charollais Sheep Society sale in Tullow in 2021 from the Fitzpatrick family Wexford for €1,700.

Also, for the Texel ewes, they use Kilduff Enzo, which they bought from James Dunne in 2021 at the Blessington premier sale for €1,800.

For the Suffolks, they use Clyda Cracker, which they purchased privately two years ago from Susan O’Keeffe.

They also use their cousin’s Suffolk ram from the Kilbeg flock, which he purchased from the Benedyglen flock for €1,800 last year at the Northern Ireland Branch of the Suffolk Sheep Society in Ballymena Livestock Market.

“We prefer to buy a stock ram. We are farming full-time, so we are here on the farm, anyway. It is different for people who may have an off-farm job; it is easier for them to AI ewes.”

“We use natural service. However, AI is not cheap, and it is getting expensive, so it is a cost that we do not incur in our breeding programme.”

The brothers lamb 80% of their flock in January, with the remainder not in-lamb lambed on March 12th and all pedigree Texel ewes – which splits up lambing season.

In January, they achieve their four-week compact lambing period by using minerals, boluses, “good” quality grass, and a teaser ram.

The brothers said they lamb the majority earlier in the year, which enables them to sell progeny at a suitable age.

Their sheep lamb in a 100ft x 45ft shed split into penning and handling facilities – with lambing cameras installed.

The Cork-based brothers retain 40% of the “top” half of their flock”, sell surplus in-lamb ewes and ewe lambs at society sales in the autumn and cull the remainder.

They sell Suffolk, Charollais and Texel rams around 8-months-old on-farm or at society sales from July.

The brothers sell some shearlings 16-18 months-old in mid-June on-farm and Oxford Down sheep as lambs on-farm.

“We like to sell as much we can from home as it is easier. It is nice to have repeat customers coming back. We sell 60 rams a year through all the breeds.”

“We have some people from Kerry, and there could be 2-3 people, and they could take half a dozen with them.”

“So, we have a good customer base. I suppose some of the customers have been coming to us for the last 25-years.”

The family has picked up prizes at society sales and local agricultural shows annually and championships associated with each breed society.

The challenges they face in the sector include stockmanship (physically handling sheep to undertake daily jobs in a one-person situation), rising feed costs, and veterinary and animal remedy costs.

Commenting on sheep prices they said: “Commercial sheep went up a nice bit in price last year, but ram trade did not improve a whole pile from the previous year, and this year is the same.”

“In my view, we are getting the same farm gate prices that we have been for the last ten years, and that is just the sheep trade in general.”

“Last year was the first year that there were price rises. The only good factor is that the cull ewe price has really increased this year.”

The brothers said when starting as a pedigree sheep breeder, choose a female with good commercial attributes, and as you progress, you can use stock rams to determine the sheep you breed.

“The better the female that you can buy when are starting, it puts up you further up the ladder as regards where you are starting from.”

“It is a slow process, and it takes time. I suppose there is a lot of luck involved with the females you buy.”

The Sheep Ireland members intend to reduce their stock ram numbers and cull more sheep – due to rising input costs.

The brothers cannot foresee an increase in the national flock in general with the age profile of sheep farmers.

They said they would keep supplying customers “as long as they keep coming to them”.

“I think sheep farmers will have to have another enterprise or maybe an off-farm job going forward.”

“It is easier to work drystock with a full-time job, and you can do your jobs in the evening and weekends and get away with that.”

“I do not know how many ewes you would need to generate a proper income from sheep farming alone. I suppose anyone with sheep has maybe a few cattle with them or an off-farm job.”

“If fertiliser and feed prices stay where it is, it will make it hard enough for people to stay in the business. There is only so much cost you can incur. You have to make a profit at the end of the day.”

“Lamb is making a good price, but if it gets too expensive in shops, people might shy away from buying it, which will reduce demand as well,” the sheep farmers concluded.