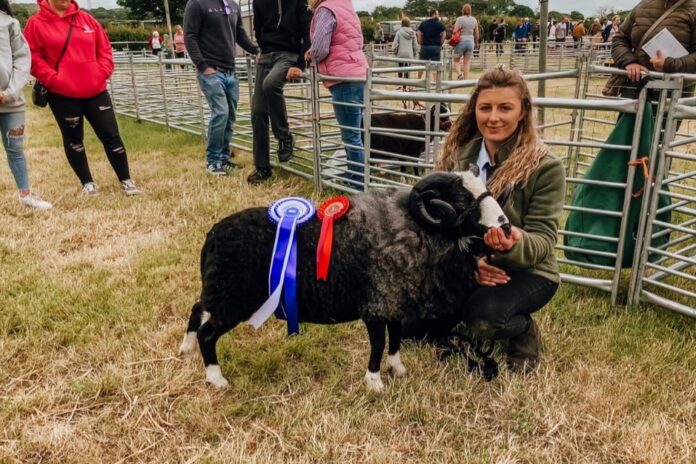 In this week’s sheep segment, That’s Farming speaks to Hanna Lois Jones. We discuss her road to working in agriculture, her flock of Balwen sheep, and plans for the future of the family farm.

Peer pressure combined with a lack of independence and confidence initially acted as deterrents in Hanna Lois Jones’ desire to further her career in the agricultural field.

During her school years, she says, “girls were not seen in agriculture courses at the local college”.

“I did not want to be the only girl on the course, so I pursued my love for sports, textiles and art. I did not pursue my passion for farming to expand my knowledge,” she told That’s Farming.

“Our head of Sixth Forum told me that I could not try to Harper Adams University to study agriculture as I had not been to the local agriculture college to gain a GCSE in the subject.”

“I thought I become a supply sports teacher; therefore, I could still have Thursdays off to take my lambs to market and pick and choose my days around lambing, silage season and shearing. That did not go to plan,” she laughed.

She studied sports science and worked in this industry for one year before securing a full-time in the local Wynnstay Farmers, which she juggles with her involvement in her family farm.

Hanna (24), the only granddaughter out of six grandchildren, is the fifth generation to work on the family farm in North Wales.

She recalls her earliest memories on the farm, including “sitting in the tractor, silage season and running alongside the sheepdog herding sheep”.

Hanna explains, “If you have grown up on a farm, there is a guarantee that you have been used as a sheepdog at some point during your childhood”.

“I have always been called Dr. Doolitttle by my close family all because I would have such a special bond with any animal, especially my pet sheep.”

“I wore a little red coat, like a little red riding hood, and I wore it daily to feed sheep. As a child, I was convinced the sheep only recognised me because of the coat.”

Hanna claims her interest in farming was “instant from a very young age”. 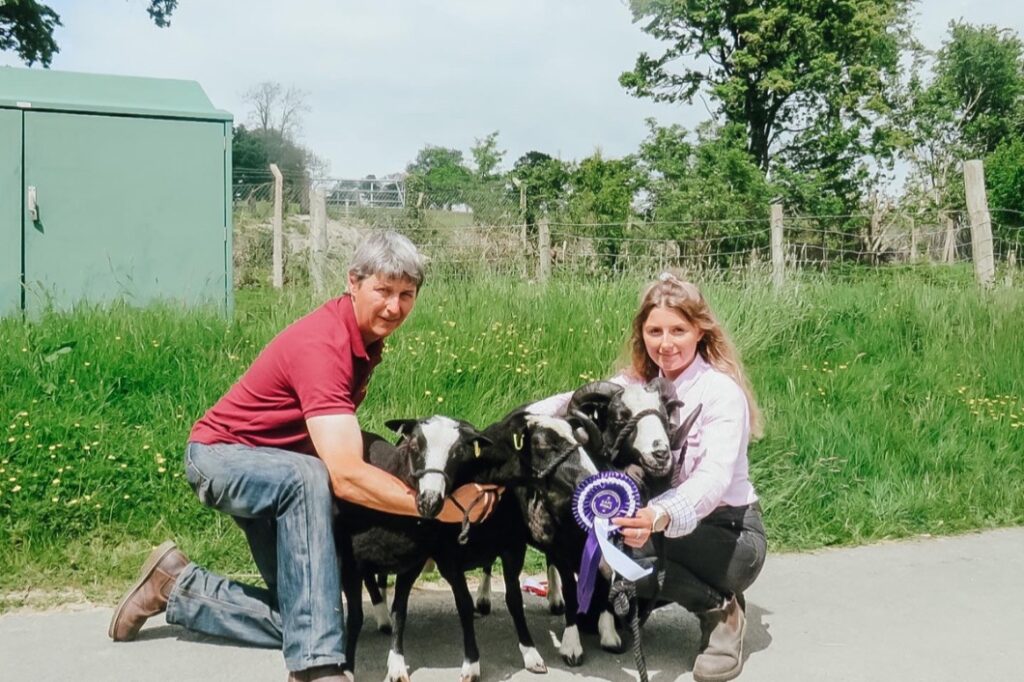 The farm is based in North Wales, with views of the coast from the yard, overlooking surrounding lands and towns.

Currently, Hanna’s grandparents own the farm, which spans circa 30-acres.

Hanna owns a flock of Balwen sheep, which she named Balwens Marli, after her local area, and has a small herd of suckler cows.

She explains further: “We breed Texel and Beltex sheep primarily and also some black Texel-crosses.”

“Four Welsh black sheep were given to me on my seventh birthday; we did not have a ram to suit at the time, so they ran with a Texel ram, and the breed has developed.”

“On my 21st birthday, I was given a starter flock of Balwen sheep. They are my pride and joy, and I take pride in showing and breeding them.”

She initially chose Balwens – a small Welsh breed originally from the Tywi Valley in South Wales – due to their markings and size.

The Balwens became a rare breed after a snow storm in 1947, where only one ram and a handful of ewes survived.

“Their markings are similar to Zwartbles, but the Balwens are much smaller with a couple of slightly different markings,” Hanna explains to That’s Farming. 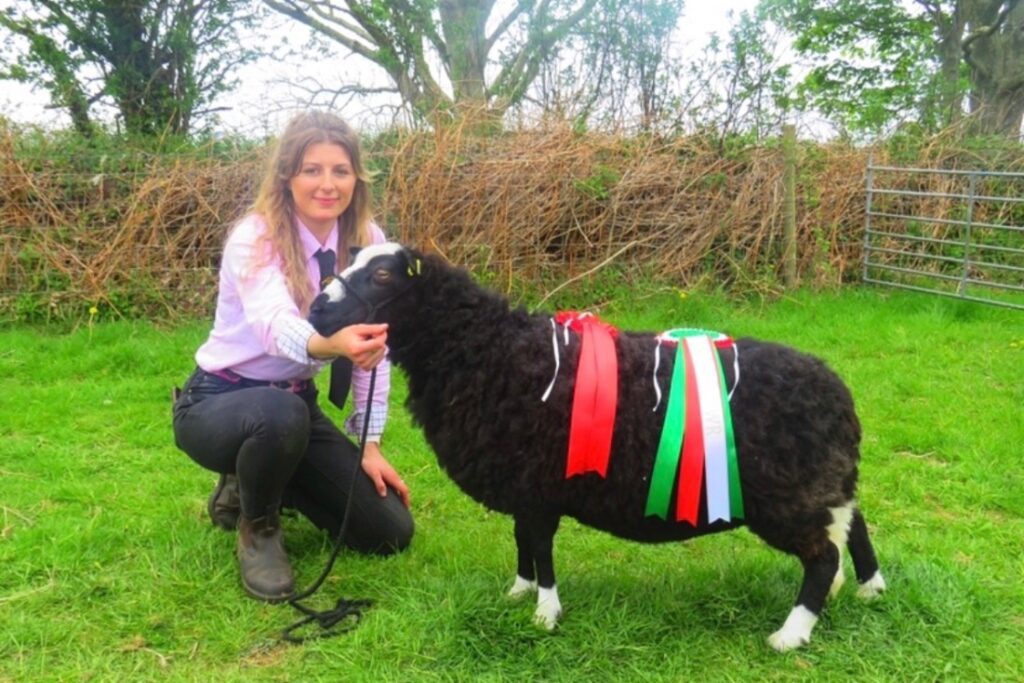 Due to the registration rules and regulations and the small number of stock, she admits that it is difficult to push numbers.

“For example, unlike the Texels, we could not go and buy 20 of what we like. There is tough competition when it comes to bidding against others.”

“If we were only showing them at local shows and as a small little hobby, then I would stick to non-registration stock, but due to the level of showing we compete at and our bloodlines, we do register our stock.”

“This means we are more limited to the choice of available stock.”

Currently, Hanna owns 31 Balwen sheep, including all breeding ewes, shearlings, this year’s crop of lambs and rams. Furthermore, she lambs indoors from February to April each year.

Hanna believes a successful sheep farmer must have certain traits and qualities, the first and foremost factor, is, she says, knowing your stock.

“If you are a dedicated stock person, and your heart is in the job, then you will know one ewe from the other.”

“Another quality is to be dedicated and passionate about the job,” she adds. 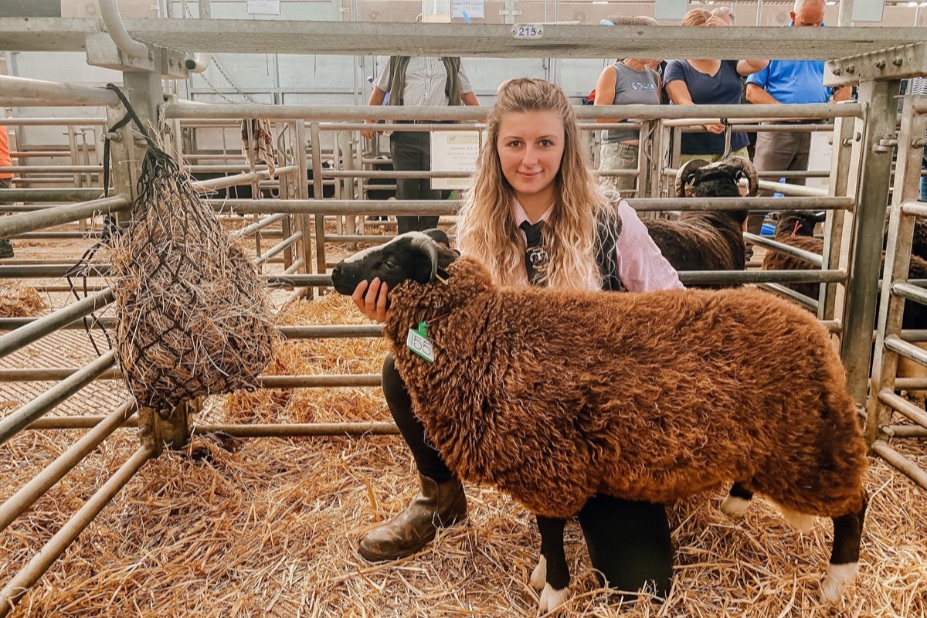 And it is that very dedication and passion that she speaks of that is the driving force behind the success of her Balwen Marli’s flock.

She has created a 5-year plan for her flock, and hopes that in time to come, she will have grown her flock and have competed in RWAS at least once.

“My ultimate goal is to be able to do what I love, which is farm, alongside my small business with my partner, who is a welder working in fabrication.”

“Our goal is to have his workshop on our family farm where we can both succeed in our passions at home together.”

“I hope to, one day, have a large Balwens Marli flock and to start breeding and showing a new breed with my partner.”

Hanna concludes, “I needed the journey I have been on to get to where I am today, learning every day.”

- Advertisement -
Previous article‘Lamb prices are still over €1/kg ahead of last year’
Next articleRaphoe: Lighter, fleshed cattle back ‘slightly’ in price