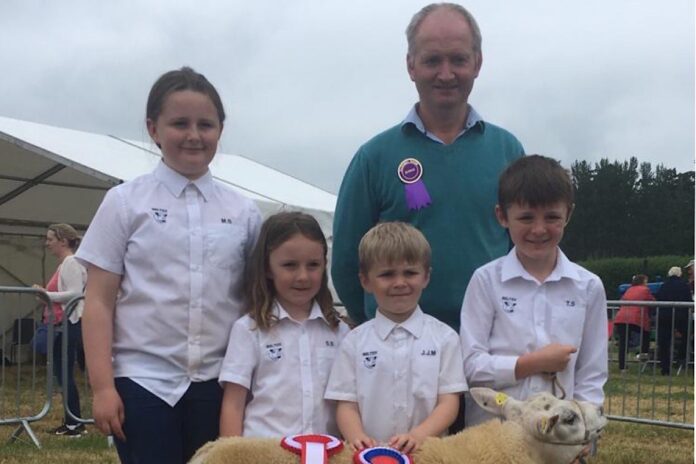 ‘There is profit even when sheep are going bad’

“You will not buy much with €10,000 going out buying cattle, but you will come home with a fine flock of sheep.”

Those are the words of Roscrea farmer, John Maher, who has 60 pedigree sheep (Beltex and Charollais), 70 Mayo Mule commercial ewes and up to 20 cattle, which includes a pedigree Belgian Blue and Simmental heifer.

John runs both enterprises under the Ballinakill prefix with success with both animal types.

In 2012, John picked up overall champion in Tullamore Show with Ballinakill Hulk, out of Ballinakill Beaut, who in 2012 went into a Belgian AI station.

“We have always been involved with sheep and kept sucklers. My brothers and sisters are all farming,” John Maher told That’s Farming.

“I have another brother, dairy farming, and a couple of sisters farming. So, we are all involved in the trade.”

In 1996, his father, Dudley, established their Beltex flock under the Ballinakill prefix by purchasing a ewe and ram from Tuam pedigree sheep breeder, TJ Gormley and importing ewes from Belgium.

The family uses Charollais ewes to produce rams and crosses Charollais, Rouge and Texel ewes with Beltex rams to breed crossbred rams, “which some commercial farmers favour for hybrid vigour.”.

John selects the above sheep breeds because of their ease of lambing, ability to lamb outdoors, and factory performance.

In the early 1990s, John founded his pedigree Charollais flock with his first ewe purchase from Marion Lysett.

He claims his foundation ewe from Phillip’s flock is some of the first Dutch Spotted ewes ever to set foot in Ireland.

The Dudley family has been involved in ET work for over seven years, focusing on “best” ewes to increase numbers, which has also enabled John to work off-farm and carry out sheep shearing.

According to the Tipperary farmer, Ovigene carries out the procedure with an average flush yield of 5 embryos per ewe. John AIs ewes once for early lambing and uses a stock ram for repeats.

The farm aims to improve the quality of its rams for commercial farmers with the hope they have rams for the pedigree breeder.

Each year, John invests in a ram to introduce new genetics to his flock. He runs all Beltex rams with commercial ewes.

His stock rams include Carrigans Lower Denzel from Ollie Kerins, which he purchased in 2018 at the elite sale and Knockawuddy Gorman, an investment from Jimmy Killeigh last year at the sale, who also took champion lamb in Ballinasloe Show.

In addition, the pedigree sheep breeder also runs a third ram from the Knockcroghery flock, which he acquired four years ago for Charollais ewes.

He lambs pedigree Beltex and Charollais ewes indoors from January and the remainder in March, which suits ram lamb and hogget sales, with commercial ewes lambing outdoors on April 1st.

In addition, his father and brother lamb approximately 1,000 Mule ewes outdoors and use Beltex rams for their ease of lambing.

John slaughters the bottom third of all pedigree lambs at Irish Country Meats, Camolin and sells the rest mainly on-farm, with some at society sales.

He retains the best third of pedigree ewe lambs for replacements and sells the remainder.

In addition, the Tipperary farmer retains all his commercial rams as hoggets for commercial ewes.

John kills his lambs from August onwards, with 60% of Mule ewes grading Us and 40% Beltex-cross ewes being Rs in Irish Country Meats, Camolin.

In addition, he sells some ewe lambs as stores in Roscrea Mart.

He slaughters his Charollais and Beltex ewes that do not meet his mark for breeding in Irish Country Meats, Camolin, and sells a selection on-farm.

He has a strict culling policy which includes removing ewes with insufficient conformation or feet and teeth-related issues.

In his father and brother’s enterprise, they buy over 200 replacement ewe lambs in special mule sales in marts, including Maam Cross Mart and Ballinrobe Mart.

John’s nieces and nephews showcase the flock at various agricultural shows and have secured numerous titles.

One of his flock successes includes pocketing €1,820 at the elite sale and securing the top priced ewe at the Belgian Beltex Breeder’s Society of Ireland’s premier sale in 2021.

John believes you “get what you pay for you regarding investment in pedigree sheep breeding”.

“If you know you are interested in the breed, go out and buy the best female you can rather than dipping your toe in the water.”

“Females are the heart of your flock. You are aiming to produce rams for commercial sheep breeders, do not get caught up in trying to breed for the pedigree breeder.”

“However, if you go on breeding for the pedigree breeder, you will have anything for the commercial farmer.”

Plans and the future of sheep farming

He intends to continue to improve genetics, invest in some ewes and increase flock numbers if he can generate more ram sales.

The Tipperary farmer hopes his son, JJ, daughter, and Maddie continue their interest in shows and sales.

“I feel investing in breeding is the way forward overfed sheep does you no favours. It is all about repeat customers; lucky enough, we have built good relations with our customers over the last thirty years.”

The Belgian Beltex Breeders’ Society of Ireland and Irish Dutch Spotted Sheep Association member shared his outlook on the future of sheep farming.

“Costs are way different in cattle than in sheep. There are so many costs involved in farming cattle compared to sheep. If you have the land, sheep are easier to get into compared to cattle.”

“You will not buy much with €10,000 going out buying cattle, but you will come home with a fine flock of sheep, and there is profit even when sheep are going bad.”

“I find it a lot harder to make money out of cattle,” the sheep farmer concluded.