That's FarmingThat\'s Farming Irelands Largest Farming News, Properties and Classifieds Network
HomeEditor's Picks‘Our goal is to get the cost of production plus a margin’ 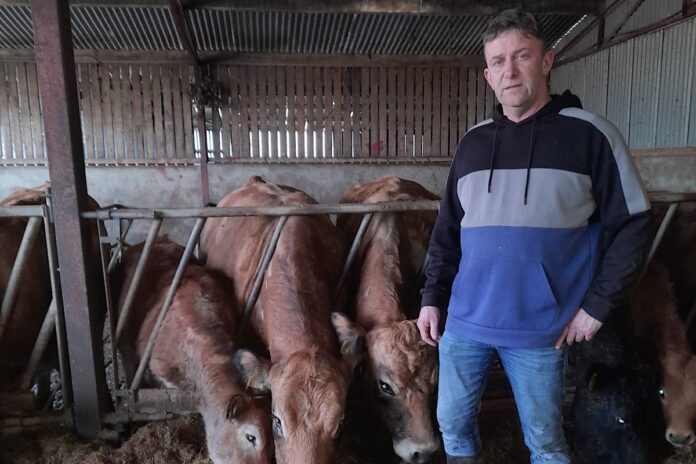 He continued to invest in other pedigree females he categorised as “good” Aubrac cows and then sold a commercial cow in its place.

He farms 30 pedigree Aubrac cows and buys in 15 Aubrac-cross-Friesians (as recipients for ET work) on 42-acres of owned land and 35-acres of rented ground.

He did not attend agricultural college but “self-educated” himself on suckler farming and the Aubrac breed.

He grew up on a mixed farm of dairy and tillage. His late father, Thomas, began using Simmentals on Friesian cows and retaining heifers.

Kevin built up a herd of 30 Salers-crosses, Limousin-crosses, Belgian Blue crosses and bred 3-4 pedigree Belgian Blue females under the Barnaboy prefix until 2010.

“It was always in me to be breeding cattle, and whatever it is, I liked it. So, I was always one to try better what we had. even when we had the suckler herd in the early stages,” Kevin O’Brien told That’s Farming.

“For example, I was always trying to change the grade of weanling we produced when I had commercial. I often won shows around the area and shows at mart sales.”

“Tuam Mart was a big draw for Belgian Blue cattle back in the day. I often took first prize for weanling bulls and heifers.”

“Farming was always something I was going to pursue in life. So, from a very young age, I was out on the farm, and that is where I wanted to be.”

“I love being out there. I suppose I was going to continue farming and eventually take over the family farm.”

Kevin’s ideal Aubrac cow is 600kgs with a “nice even” udder, with “good depth” in her front and a nice shape on her back. “I did not set out to go breeding pedigree Aubracs.”

“I was doing ET work with Belgian Blues back in the day, and a person said to me if you could get a few Aubracs, put Belgian Blues embryos in them, they are good cows, and you might calf some of them.”

“I went off and bought heifers. The breeder I was buying them off said not to do that with them. He said you should put them in-calf to an Aubrac AI sire. So, I listened to the person, and I did that.”

“The first calf, Turloughmore Harry, that hit the ground (a full brother to Turloughmore Magnificent, who stands in Irish AI) sold at 12-months at the Irish Aubrac Cattle Society’s sale at Tullamore Mart for €3,000. So, I got off to a good start, and I stuck with the breed after that.”

Commenting on how the breed performance concerning €uro-stars, he said: “In my opinion, €uro-stars hold well with the Aubrac breed. If you buy a five-star Aubrac animal, they normally throw back five-star progeny. So, the stars work within the breed.”

He uses “as much” AI as possible and focuses on utilising sires from France, including Harmonieux (S2205), Dauphin (AU4460). He also uses his own bull (Turloughmore Magnificent (AU4683).

“I have a vasectomised bull with cows in the shed. Some of my cows calf in autumn, so I might give them a second round of AI, and then I introduce my pedigree Aubrac bull.”

“Then, I move the vasectomised bull on again for the next batch of cows for spring-calving. I give them one round of AI, and then I let the stock bull run with them after that.”

The Aubrac breeder has three bulls standing in AI.

According to Kevin, autumn 2021 figures show this bull has over 200 calves on the ground.

Secondly, Turloughmore Majestic (AU4836) (entered Eurogene AI Services in 2019). His dam is Garvanaugh Farrah 13, and the bull is the son of Turloughmore Lancelot.

Thirdly, Turloughmore Magnificent (AU4683) (entered Progressive Genetics in 2018), is a son of Garvanaugh 10 and Despagnou (DPZ). This bull has a replacement index of €205, within the breed as per March 2022 ICBF genetic evaluations.

The Aubrac breeder shared his view on the genetic pool available for pedigree cattle breeders.

“The genetic pool is not that big at the minute. So, there is not a massive amount of Aubrac bulls to pull from, even going to France.”

“So, you do have to watch what you get. You try to keep everything as correct as you can with the cow and the straw you are using on her.”

“I order whatever straws I want, and the Irish Aubrac Cattle Society brings them in, and they deliver them to my flask. I do the AI myself as I am an AI technician.”

Kevin previously worked for Bova AI for a few years until recent years, but now works full-time as a supervisor at Galway City Council. 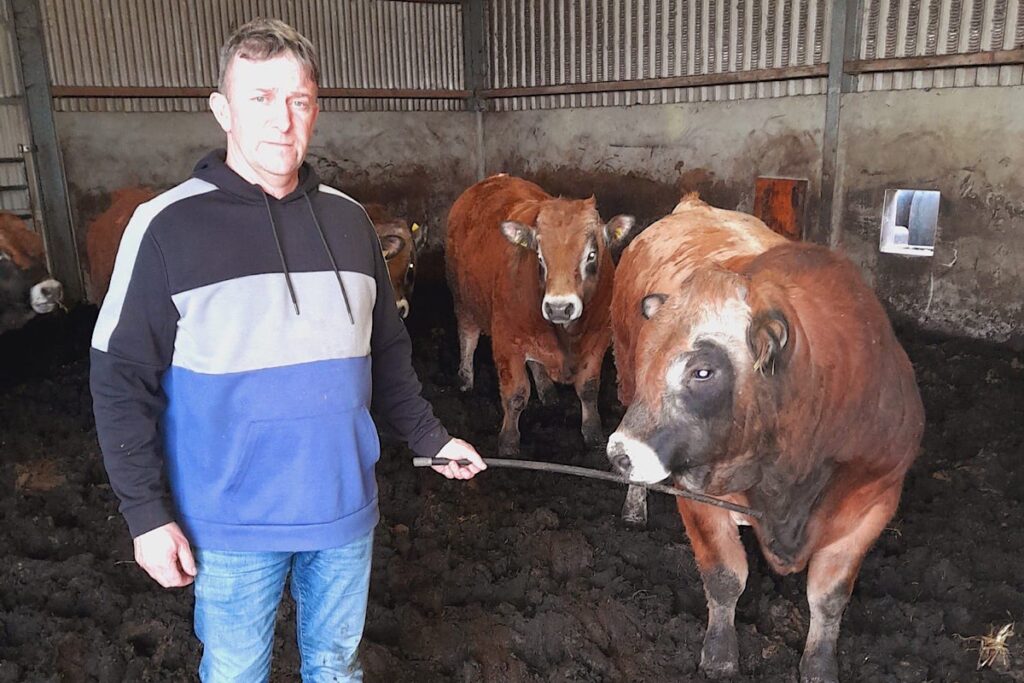 Kevin undertakes ET work in the herd using Aubrac-crosses as recipients, and they had seven calves in total.

He flushed Turloughmore Katie, a full sister to Turloughmore Magnificent, and her progeny will be on the ground in August.

He uses one ET method with vet Daire Markham, Roscommon, and another IVP method with Paddy Buckley, AB Ireland.

Kevin’s herd’s holding rate for frozen embryos is around 50% – but it can vary.

He calves from August to September and January to March – due to purchasing cows at different stages when building up the herd.

A split calving period allows him to have bulls at 12-months-old for autumn sales and have spring-born calves ready for the following autumn.

In addition, it enables him to have autumn-calving cows calved before housing them (with a “good hardy calf”) – allowing him to concentrate on the arrival of spring-born calves. “I would rather move the cows all to the autumn if I can.”

“However, I calved a heifer at two-year-old, there were no issues, and she calved herself.”

“In my opinion, at two-and-a-half-years, you have that stronger animal. Also, it works out if you are keeping the spring heifers to bring them into autumn-calving.”

According to Kevin, cows require very little intervention during calving, and his herd’s calving interval is 371 days.

He does not find calving a “big” workload. He monitors his cows calving via a calving camera that Gaeltacht Communications installed. 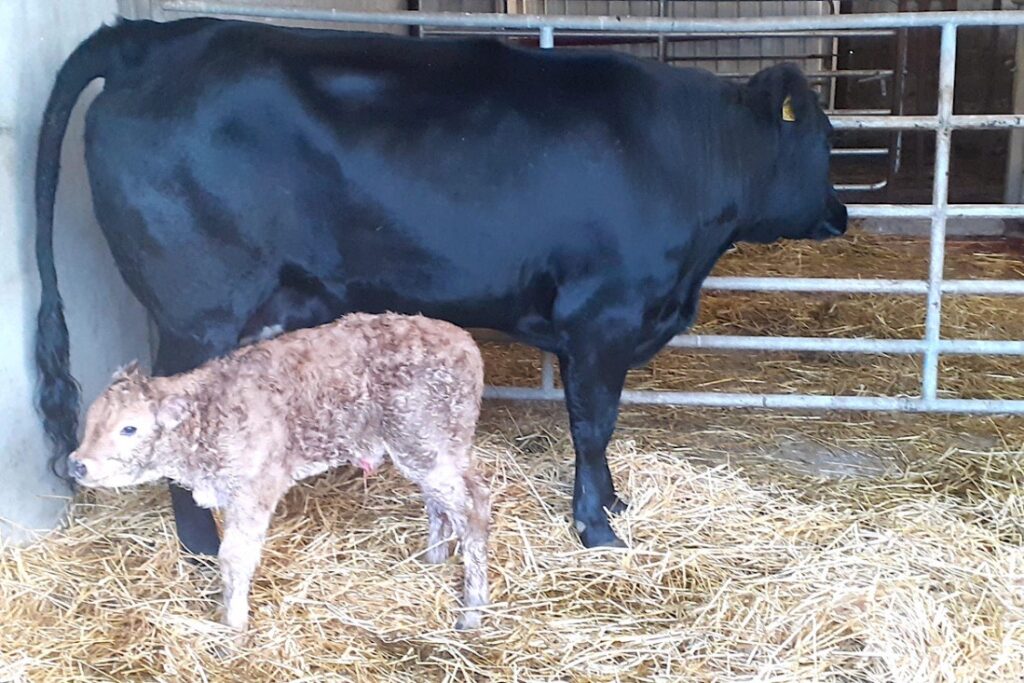 Kevin retains up to 6 replacements annually– depending on his culling rate. He has a strict culling policy for summer mastitis and fertility, of which cows he sends to Athenry Mart.

He sells his bulls from 15-20-months-old for breeding on-farm or through Irish Aubrac Cattle Society sales.

He said that he slaughters bulls on a “rare” occurrence – if they are not fit for breeding purposes. He feeds his bulls for 90-100 days (ab-lib) on a high-finishing nut.

When he brings bulls to slaughter under 16-months, they generally reach 400kg deadweight, are 630kg live weight, are mainly U+s (on two occasions Es), a 66% kill-out and a 2+ fat class.

“However, I had not that issue last year; all my bulls went for breeding. A lot of dairy farmers are using them, and like the calves, they are getting.”

“My bulls do not go back on grass once they go in during the autumn. When they come out of the shed, they either go to sales or are sold to farmers on-farm. I would not have the land to carry bulls out again.” 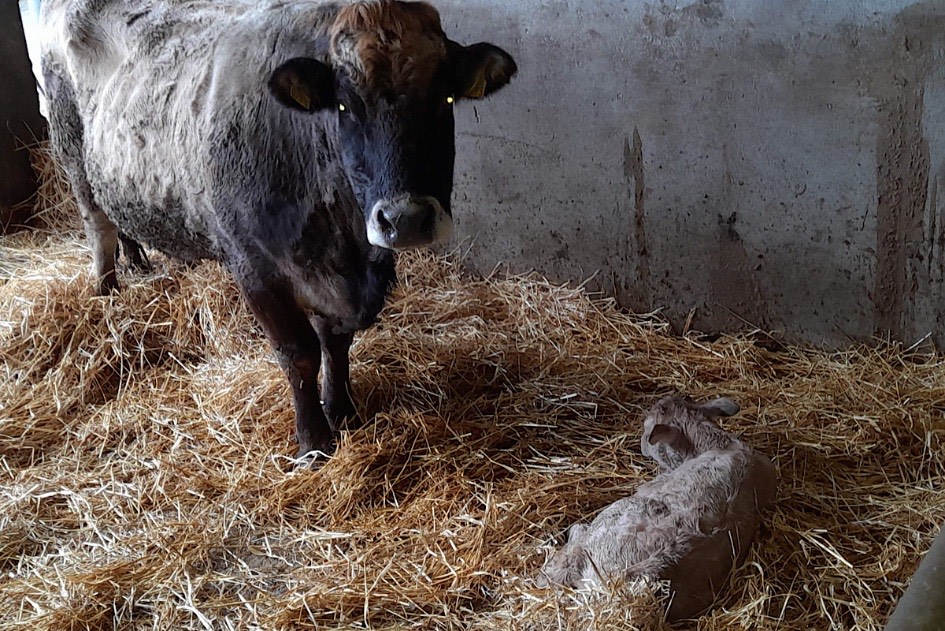 Kevin plans to use the embryo calves from his recipient heifers and breed from them to bring his herd to a “higher” level.

He intends to use his own bloodlines, choosing the “top” French AI bulls, retaining the “top” heifers, and visiting the breed’s home in France.

Kevin welcomes the return of agricultural shows and plans to exhibit in Galway and Tullamore Show this year – which he did before the Covid-19 pandemic.

The Galway farmer believes that to be successful in pedigree cattle breeding, you must “have a good eye for stock”, and it is “very important” to use a good female for your herd’s foundation.

“If you have the top and you keep using top heifers, I imagine you should stay near the top.”

He is a director of The Beef Plan Movement, and he sits on its suckler and dairy-beef committee.

“There is a great bunch of farmers around the country involved in The Beef Plan Movement, and they are getting it out there about beef and suckler cows,” the Aubrac breeder added.

Commenting on his view on the future of Irish suckler farming, he said:

“Suckler farming is in a tough place at the minute. For any of the farmers in it, their land cannot be used for anything else with small farms, especially in the west of Ireland. So, in my view, it suits the sucker herd.”

“Farmers may cut down on suckler cow numbers and may not, but it is what they know. You are going to need them continental cattle (that mix) in the country to keep producing quality stock.”

“Input costs have skyrocketed (with fertiliser, feed, and fuel). I know the price for cattle in the factory has gone up, but it has not gone up as much as input costs have.”

“Hopefully, this war will end soon, and things might level out. We hope beef prices will strengthen even more. We hope input costs go down.”

“In my view, farmers need some compensation at the minute to keep going, but are they going to get it? I doubt it.”

“If you can get a price at the end of the day and if you can get the cost of production plus a margin, that is our goal. You go on margins. If there is a sufficient margin there for the farmer, he/she can keep thriving,” the suckler farmer concluded.