That's FarmingThat\'s Farming Irelands Largest Farming News, Properties and Classifieds Network
HomeBeef‘Suckler farming has to survive in one form or another’

‘Suckler farming has to survive in one form or another’

Twenty-two years ago, Bernard Kerins left his job in the Irish Air Corps to return home and establish the Kerins’ pedigree Angus herd.

The Carnaree, Ballymote, County Sligo native established the herd by purchasing Owenmore Noreen and Owenmore Nicola from his uncle.

In subsequent years, the family acquired the remainder of the Owenmore herd when his uncle retired from pedigree breeding.

Their herd comprises 13 pedigree Angus cows plus followers, equating to up to 30 cattle, on his parent’s farm and leased land from his uncle.

Bernard is a part-time farmer who runs Kerins Tyres – a tyre fitting centre.

Bernard is assisted on the farm by his wife, Jacinta, and daughter, Melissa, and his uncle, Anthony Scanlon.

“We used to run the two herds together, so I cannot take credit for everything. I would like to give Anthony credit as he put in the groundwork from the early 1990s,” Bernard Kerins told That’s Farming.

“Growing up, my parents had a smallholding. We ran mainly sheep and used to bucket-feed a few calves. There were a few commercial cows.”

“Agriculture was always in my heart with some form of animals. So, it was always there.” 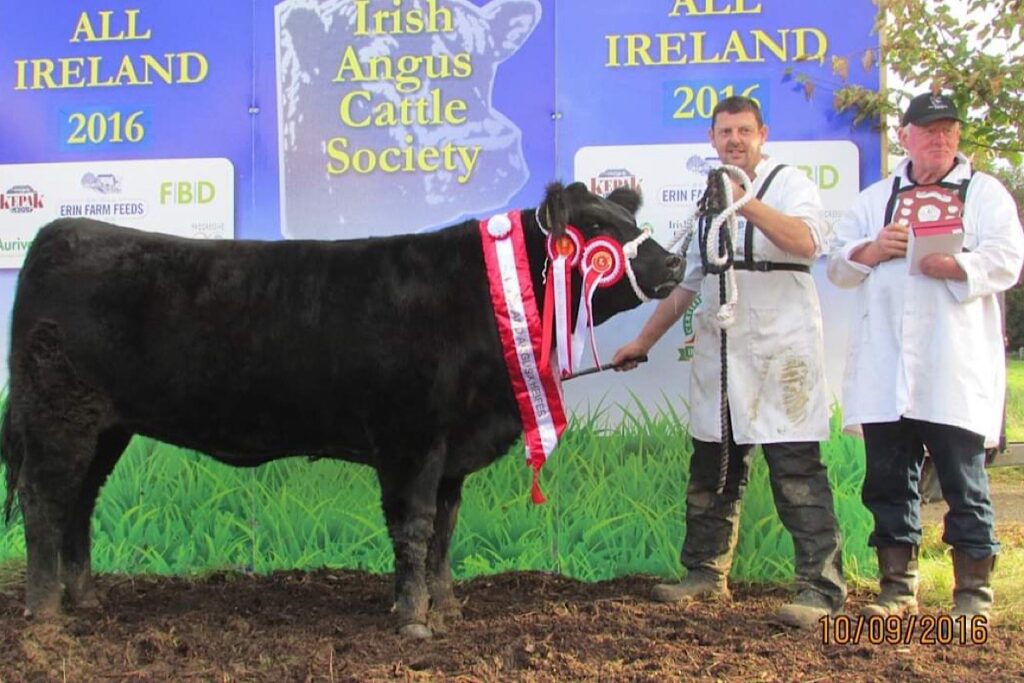 Their preferred Angus cow is 750kgs-850kgs, “who can give birth to and feed a quality calf well each year, is easily managed, and hardy”.

Their connection to the breed began when Bernard’s uncle introduced an Angus bull and added some pedigree heifers.

Before this, the Scanlon family ran their Shorthorn-Fleckvieh-cross cows with a Shorthorn bull. Anthony chose the breed for its easy calving and polled nature.

The family said the breed ticks all the boxes for them for “birth to plate”, and they are the “ultimate beef breed” for them. In their opinion, they are probably the “most complete breed”.

“We say as our mission statement that we endeavour to breed cattle with good growth and weight gain rates while retaining easy calving and the all-important Angus breed character.”

“Also, we focus heavily on short gestation, which aids easy calving. They may not grade as high as some continental cattle, but the eating quality of their beef speaks for itself.”

The family has introduced red genetics into their herd in the last few years, which is a route they hope to pursue further.

“I like the Red Angus. There is a good demand developing for Red Angus bulls for the commercial herd to gain a coloured calf.”

“I suppose they would be especially suited for farmers who may be used to continentals and are of a certain age where they do not have the help to be calving cows. Also, the natural polledness of the breed leaves less labour.”

They use 90-95% conventional AI on their cows and a homebred Angus bull on females out-of-sync with calving or not holding with AI.

“It has always been a system of 95% AI on the farm since we ventured into pedigree breeding. I feel you can match the bull better to the cow rather than having one specific bull.”

“In my opinion, there is a wide range of bulls available. There are plenty to choose from to breed the type of cattle you want to breed and improve anything you want to improve.”

“One thing I would be cautious about is using bulls for pedigree breeding with poor breed character.”

“We would like our Angus breed to retain their character as much as possible, especially in pedigree breeding, which might not necessarily be as important for the commercial farmer. However, for us, an Angus should look like an Angus from head to toe.”

In 2006/2007, the family decided to preserve the genetics of Owenmore Noreen as “a breeding insurance policy” through ET work, with the flush yielding 7 grade A embryos.

These embryos are full siblings to Kerins Candy, and she is a great grandmother of Kerins Revolver.

The family calves 50% of their cows in the autumn and 50% in the spring, which reduces their housing requirements and allows them to have bulls of varying ages to sell throughout the year.

“We would not necessarily compact our calving. We take the calves as they come naturally.”

According to the family, their herd’s calving interval is 365 days, and cows require very little intervention during calving.

They achieve their herd’s calving interval by introducing vitamins and minerals in animal diets.

The Sligo farmers calf their replacements from 26-27-months-old.

“If a heifer is big and strong at a young age, we have her calving around the two-year-old, but if they need more time to come on, we will let them run longer to give them a better chance.”

“I think it assists with their star ratings if they have calved at two-year-old, but most definitely before two-and-a-half-year-old.”

“In my opinion, the Angus breed is sexually mature at an early age, so there is no problem going into calf at a young age.”

“I would not like to see smaller-type heifers put in-calf when they could go on another bit, where it gives them a better chance when they come to calving.” 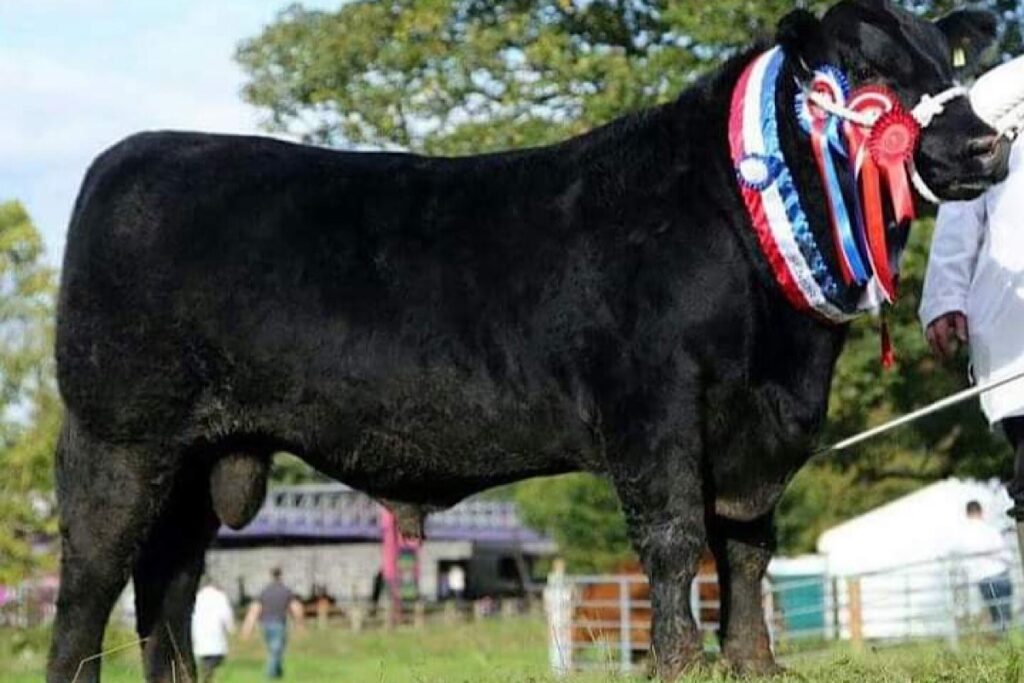 They replace, on average, one cow per year – due to the “good” longevity of their Angus female and sell any excess heifers off-farm to other pedigree breeders.

The family has a strict culling policy for cows with bad feet, poor milking ability, and poor fertility.

The family sell their cull cows in Aurivo Livestock Mart, Ballymote. In November 2021, they secured €2,170 for a 995kg cull cow.

In Christmas 2021, the family exported two Angus yearling heifers and a one-year-old Angus bull calf to Germany through Lisduff Exports. These purchases came about due to a visit by German pedigree breeders to their farm earlier in the year.

In addition, they sell, on average, seven pedigree bulls a year with a mixture of on-farm, society sales and at the Midland and Western Livestock Improvement Society, Carrick pedigree cattle shows and sales.

Commenting on their view on the Angus breed, he said: “The Angus has really upped its game. There is a bigger demand for Angus because of producer groups and bonuses for Angus cattle to kill.”

“Also, there is generally better knowledge about the quality of beef being bought via traditional-bred cattle.”

“The demand for heifers is improving as well. More people are getting into the breed to breed bulls because of good demand and subsequent higher prices for them.”

The following is a list of the herd’s successes:

Later that year, at the Irish Angus elite sale, the Brennan family from the Moyview herd purchased Kerins Perkemi for €4,800.

In addition, they sold Kerins Revolver for €4,200 at the Irish Angus elite sale in 2019 to the Longbank Aberdeen Angus herd in Dumfries, Scotland.

According to the family, this bull went on to breed a junior reserve female champion in 2021 at the Stars of The Future calf show in Scotland.

The family noted that Owenmore Mella, who is also a daughter of Owenmore Kit and full sister of Owenmore Nick, the Irish Angus all-Ireland senior male champion, in 2017.

In 2021, the family picked up the best medium herd at the Connacht/Leinster Angus Club Competition and won the small herd section of the club’s competition in 2019.

They also like to show Angus-cross-Blue Grey heifers (which are an AAX SH mix) with one of their greatest successes being the All-Ireland Angus-cross heifer title in 2016.

The family manage their farm in a paddock system and rotate their cattle regularly. He has not branched into grass measuring yet.

The family believe that to be successful in pedigree breeding cattle, you should “focus on genetics and educate yourself on what the proper animal of your chosen breed looks like and how it should perform”.

“In my eyes, the day you buy is the day you sell. So, if you start with a good base, hopefully, the rest should fall into place.”

The family intend to maintain their herd size and may construct more facilities – depending on rising input costs.

“I plan to try to survive in a very volatile climate. I think the Angus breed will wear it out because of their ease of management and low labour.”

“In my opinion, early maturity is a key factor in survival at the moment for keeping a low carbon footprint. So, the Angus breed is ideally placed to ride out this storm.”

“Suckler farming will survive. It has to be there, and it needs to be there. Even if there is not a great income out of it, it is engraved in the people of the west of Ireland.”

“In my opinion, it is what we do best, and it has to survive in one form or another, even if it is only for the love of it,” the suckler farmer concluded.

- Advertisement -
Previous article
Bulls rise to €3,400 and average €2,750 at Kilmallock
Next article
‘Farmers who should be using sexed semen are not’