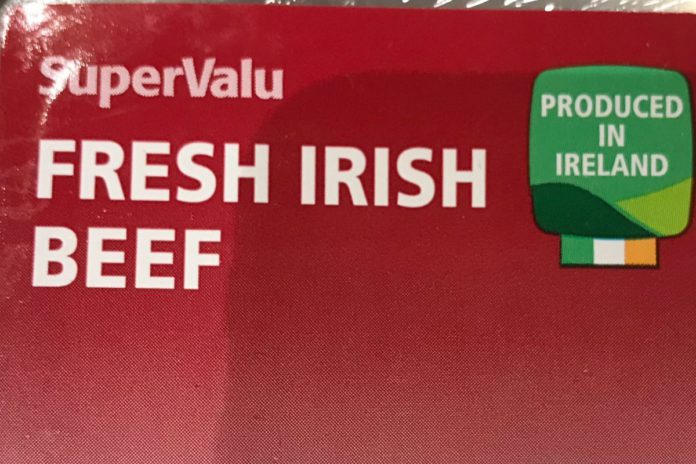 ‘All our SuperValu-branded beef is 100% Irish’

Supervalu has come under fire after beef, labelled as being from Azerbaijan, appeared on shelves in one of its stores, as reported by us here.

“Supervalu has claimed to IFA that this was a ‘coding error’. However, they applied their own ‘produced in Ireland’ logo to the product, rather than the official Bord Bia Quality Assured (QA) logo,”he explained.

“They need to clarify why this produce did not meet the Bord Bia standard.”

The IFA president stressed that the ‘produced in Ireland’ logo was misleading and that retailers should not be allowed to use their own likenesses of the Bord Bia QA logo.

“This logo is based on clear criteria that the beef must come from a quality-assured Irish farm and that it is slaughtered in Ireland,” he added.

In a tweet yesterday afternoon (Sunday, April 5th), the farm organisation asked: “If @SuperValuIRL say all their fresh beef is ‘Bord Bia Assured’, why do they use this ‘produced in Ireland’ badge and not the @Bordbia mark?”

A spokesperson for SuperValu said: “All our SuperValu-branded beef is 100% Irish and 100% Bord Bia approved, sourced only from Bord Bia-approved suppliers.”

“Bord Bia does not allow the use of their Bord Bia approved logo on Irish meat wrapped in-store at the butcher counter.”

“All our Irish beef wrapped at our butcher counters is 100% Irish and Bord Bia-approved.” the spokesperson concluded.

- Advertisement -
Previous article
Sheep factory agents told ‘get me everything you can get your hands on’
Next article
VIDEO: Calf prices ‘very similar’ to pre-Covid-19 restrictions