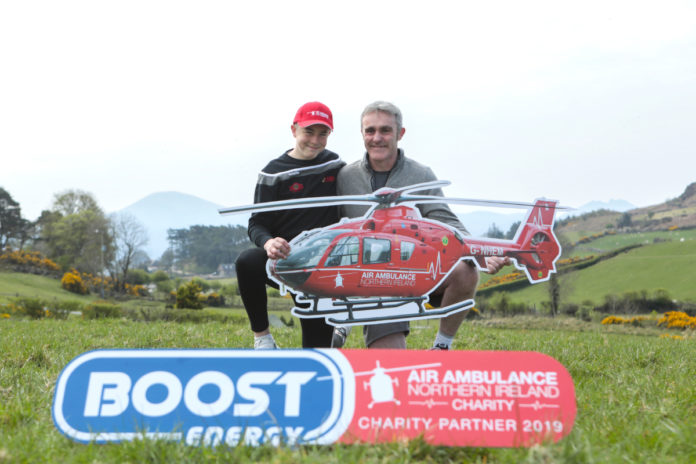 The challenge involves climbing one, two or three of the country’s famous mountains in aid of the life-saving charity.

The first climb is due to take place on September 12th on Slemish in Co. Antrim, followed by Sleive Donard in Co. Down on September 26th.

This year, a virtual challenge has also been established for those that cannot attend. The walkers can choose one of the three peaks they would like to virtually complete and then climb the equivalent number of flights of stairs.

The three Peaks Challenge was set up in 2019 to help raise awareness and essential funds for the air ambulance service.

The Helicopter Emergency Medical Service (HEMS) has dealt with 1,393 serious to life-threatening cases throughout Northern Ireland, with one of these cases being Conor McMullan from Castlewellan, Co. Down.

The air ambulance came to his aid and the HEMS consultant and paramedic were able to administer critical care interventions to Conor and stabilise him. These interventions can significantly reduce the chances of long-term brain damage from this kind of injury.

The McMullan family have been huge supporters of the air ambulance since Conor’s accident in 2017 and they will be taking part in this year’s Three Peak Challenge.

John McMullan, Conor’s father, said: “The Three Peaks Challenge is right up our street as a family and something we can all get involved in. AANI is a service we certainly never thought we would ever need but we will always be very grateful to the team who attended to Conor.”

“We are encouraging all of our family, friends and the community to come along and get involved – it’ll be a challenge but a great day out! Please support this service and help ensure that AANI is available for other families in the future should they need it,” John continued.

Kerry Anderson, Head of Fundraising at AANI, said: “The Air Ambulance medical team continue to be tasked out to traumas like Conor’s on average once or twice every day. The life-saving service is there for us every day, and pre-hospital critical care can mean the difference between life and death.”

“Such a crucial service for everyone means that even in these challenging times, fundraising has to continue. The Three Peaks involved over 365 people last year, a tremendous effort.  That team collectively raised £25k, keeping the team flying for almost 5 days. So, we’re delighted to be able to offer this again, supported by Boost Drinks.”

“Our supporters are looking forward to walking our beautiful peaks after necessary lockdown protocols are eased, or the virtual option is also available,” Kerry added.

Registration for the event costs £20 per location. To register, donate or to find out more, click here.