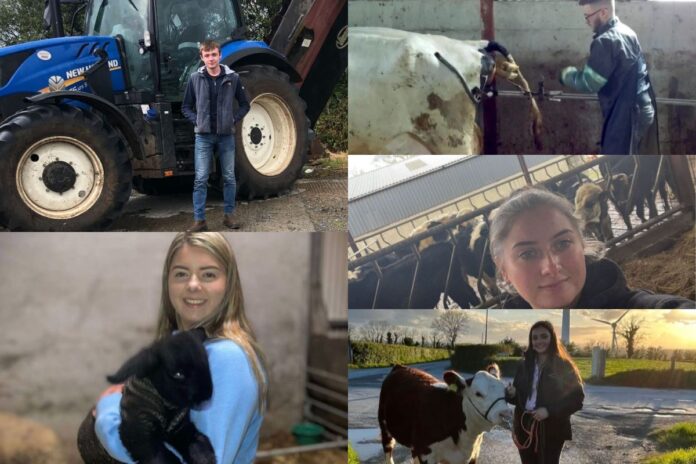 5 of our most popular ag/veterinary students in 2022

That’s Farming reviews some of our most popular features in our weekly Student Focus series in 2022.

Four of them are veterinary medicine students, and all were interviewed by our resident editor, Catherina Cunnane.

19-year-old Colin Gilligan hails from a sheep and suckler farm in Leitrim and studies veterinary medicine at UCD.

“I always wanted to be a farmer, but my mother wanted me to have something alongside the farm, so veterinary seemed like a job that would work well with the farm.

“There was never really a time when I thought I am going to be a vet.”

“I suppose I was around 13 when I started to consider veterinary as a career, which I think was a help because all the way through secondary school, I was thinking of exams and, ultimately, the final exam in sixth year.”

“Luckily, I got the points the first time around and enrolled straight away after completing my Leaving Cert.”

Mockler is a 20-year-old first-year UCD student from Co Galway who hails from a family farm.

“Honestly, I do not know exactly what age I was when I realised I wanted to become a vet, but I was quite young.”

“My primary school teacher said to me recently, “you know, Lauren? You were six when you first told me you were going to be a vet”. I suppose I just decided at a young age and never once changed my mind.”

“I always loved to see the vet coming to the farm (not what most farmers want), and if it was a section, that was even better.”

Barret does not have a “rich heritage in farming that has gone back countless generations”, but he became interested in agricultural science in recent years when he studied the subject for his Leaving Certificate.

He currently rears pheasants and is a student at Ireland’s only veterinary medicine school.

He told our editor, Catherina Cunnane: “When I got to the time of my Leaving Certificate, my heart was set, and I only put down one choice on my CAO, and that was veterinary in UCD.”

“I said to myself that if I did not get it the first time (which I did not), I would simply just do the Leaving Cert all over again because I knew this was the only career I wanted.”

“I enrolled straight after school. Most people assume that people who go from these courses with high points, which veterinary often is, that you must like school, and that is why these students do so well in exams.”

“However, I can confirm that it is not at all true because I was never a fan of school,” he admitted.

She does not hail from an agricultural background, but her interest in the field developed during transition year when she was 16.

“Deep down, I knew I wanted to do an ag course but being a woman and having no background in farming, it took a lot of convincing within myself that I could do it and am capable of achieving in this field.”

“When applying for courses through the CAO, I knew that Mountbellew Agricultural College was the only place I wanted to be.”

“My current course was my first and only choice on my CAO.”

“When researching it, I was easily attracted to the fact that it is both a mixture of science/business and practical-based not only on the farm but also has lab work.”

Heather King (22) runs the Somerville Hereford herd with her family and, at the time of the interview, was in year five of her veterinary medicine and surgery degree at University of Nottingham.

She enrolled in the course in 2017 and graduated in July of this year.

“I actually really wanted to go to UCD purely because it was closer to home. I kept on 4 A levels to increase my chances of getting a place but still did not get the points needed.”

“This definitely played a part in me choosing to go here, along with the facilities available on campus to help us learn practically.”

Read about becoming a vet.