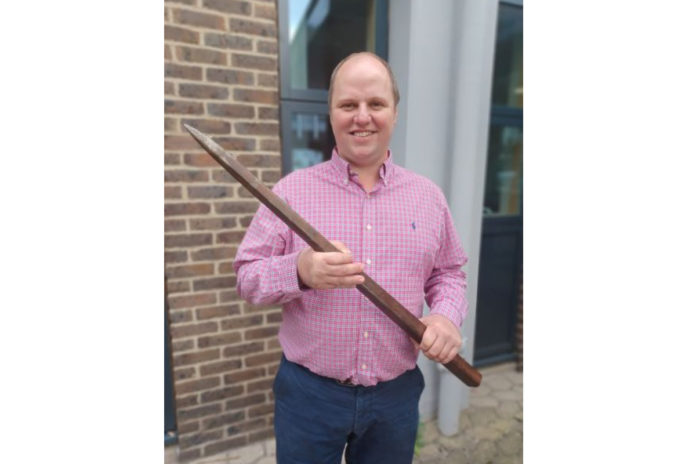 Farmer lucky to be alive after being impaled by telehandler

Farmer, Jonathan Willis, will be “eternally” grateful to everyone involved in saving his life following an accident.

The father-of-five was working on his farm near Wisbech in the UK on October 26th, 2020, when he was involved in an accident.

He had been unloading a trailer of straw bales when his telehandler rolled forward. He became impaled on one of the tines, spearing him through the back and out the other side, through his abdomen.

Wendy, his wife, raised the alarm and minutes later, the East Anglian Air Ambulance (EAAA) was on its way.

The EAAA team worked with the ambulance, police and fire and rescue teams to assess Jonathan’s injuries. Using an angle grinder, they cut him free from the telehandler.

Now, with the ‘spear’ still through his body, Jonathan was taken by road to Addenbrooke’s, where an expert surgical team waited.

He remained conscious throughout and had to keep as still as possible. Experts warned that any movement could have resulted in catastrophic bleeding.

“We know that without the enhanced skills of the air ambulance team that day, Jonathan would not have made it to hospital.”

“They took control of the situation – which was like living my worst nightmare. They made all the right decisions which got him to the right hospital and the right surgeon with a fighting chance.”

“We were then so incredibly lucky that Jonathan had one of the best surgeons in the country leading his operation.”

She said the Addenbrooke’s team “quite literally worked miracles” in the operating theatre that night.

The farmer under-went emergency surgery to remove a metre long piece of metal from his back and abdomen. There were approximately 30 people in the operating theatre at one point.

Emmanuel Huguet led the operation, and Addenbrooke’s surgical team worked throughout the night to save Jonathan.

They operated on him for almost seven hours.

Huguet said: “To carry out this highly complex surgery, there were approximately 30 people in the operating theatre at one point, including colleagues who held the spike in place from underneath before we were sure it was safe to remove.”

“When we finally had everything in place to safely open Mr Willis’ abdomen, we were astounded by the trajectory of the spike.”

“It had transfixed parts of the intestine but somehow found an incredibly improbable ‘eye of the needle’ line past all the major blood vessels, as well as missing the right kidney, liver, and pancreas.”

“At that point, it was possible to safely remove the spike and repair the intestinal injuries.”

“Mr Willis’ incredible recovery is down to his amazing composure and courage throughout this ordeal and the amazing teamwork I witnessed that night at Addenbrooke’s.”

Just two weeks later, the farmer was discharged to recover at home. However, it took almost five months for his wounds to heal fully.

‘I had never been to an incident quite like this’

“I have worked for East Anglian Air Ambulance since 2015 and frequently attend incidents involving trapped patients.”

He said he was “impressed” by how stoic Jonathan and his wife, Wendy, were.

He said this helped while the team devised a plan with the fire and rescue and ambulance services to support Jonathan, cut the tine and release him safely.

“I will never forget the sense of humour he maintained until we reached the operating theatre,” he added.

“It felt like treating a friend. I have been amazed by his survival and recovery. I am so grateful to Jonathan and Wendy for visiting us a year later.”

Jonathan said: “What happened to me was just such an unusual accident.”

“I am just so, so thankful that there were so many expert teams available to help me get through it. Otherwise, I am sure the outcome could have been very different,” he concluded.