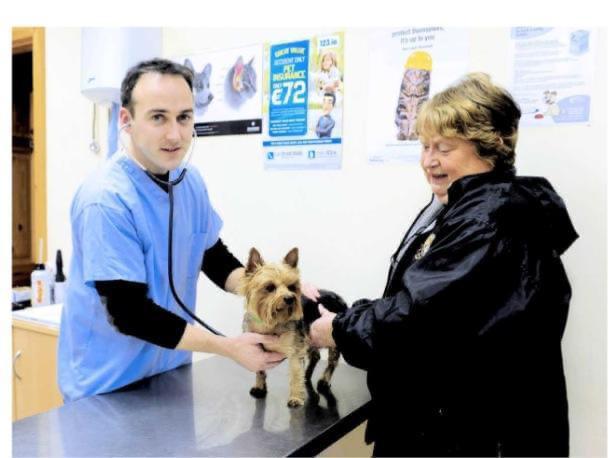 From operating on a young sheepdog which had eaten 30 feet of rope to getting knocked out by a headbutt from a cow, the life of Killarney vet Shane Myers could never be described as lacking in variety.

“ I never wanted to be anything else really.. My dad is a vet and animals were always a huge part of our lives growing up”.   Shane completed his secondary school education at the Intermediate school in Killorglin.   He qualified as a Vet from UCD in 2005.   He worked for 4 years in 2 busy practices  in Dundalk and Swords.  His dad getting 3 fractured vertebrae while treating a horse prompted Shane’s return to Killarney to help in the family practice.  “And I am settled here now” says Shane , who married  Orla O’Shea in 2019.  It sounds like they are well met as teacher Orla grew up on a farm and is also “crazy about animals”.   I ask  Shane whether the book: ‘All Creatures Great and Small’, (staple reading of many future vets), – had any influence on his career choice: “It didn’t really.  Dad had an office down a lane near the Failte Hotel in the middle of Killarney town.  You couldn’t imagine the variety of animals that we saw him tending to down that lane while he kept an eye on us as children.   We had all Creatures great and small on our doorstep”.

A half hour chat in the company of the genial Shane flies by as he describes the life of a vet as being a tough one but also “so varied and rewarding”.  “Yes, there are downsides, says Shane: “The hours are long and there is stress and pressure, particularly during the busy Spring period”.  Working in a practice with his dad and 1 other vet, the work sees an almost even split between large and small animal practice.  “Dealing with the grief of an owner when a pet has to be put down is another downside.  As a Vet you hate to see an animal dying.   It’s a sad feature of your work.  You are always aware that the beloved pet lying on the table is much more than just an animal to the owner”.

Practicing as he is for 15 years Shane speaks of the changes that he has seen over the years.  “Even since I started Vet college there have been huge advances in technology, such as digital x-rays and ultrasound.   You have to constantly keep up to speed and I am doing a course presently in small animal surgery”.  Shane cites other changes that have occurred in the work of vets as being linked to farmers being more likely to be part-time.  “ We are probably more busy on Saturdays than on any other day.   We get a lot of evening calls when farmers check animals after completing their day’s work off-farm”.  Shane continues: “Couple that with increasing stocking rates on many farms and you sometimes get more unpredictable animals”.

Most of Shane’s vet colleagues have picked up injuries at work.  His missing out on an All-Ireland club semi-final in 2012 with a broken fibula was not connected to work..  “ No that was a bang from one of the Kerry lads during a challenge match”.  Which brings us onto the small matter of his footballing prowess.  Shane possesses 4 Senior County Championships and 3 Munster club championships with famed Killarney club, Dr. Crokes.   He starred as a flying wingback  on a team which would have gotten the better of many inter-county sides at that time.

Combining the life of a busy vet and a Dr. Crokes footballer for a long period sounds hectic but being busy was nothing new to him. Growing up he combined football and school as well as competing to a very high level at showjumping until he was 21.

Any advice he would give to a young person interested in becoming a Vet?  “If you really love animals then go for it.  There are plenty of options in Europe and in the UK as well as the course in Dublin.  The study is worth it because it is a  very rewarding job”.  And the best advice Shane has gotten from older Vets?

“An older Vet told me once: Whatever you do don’t  do any harm…. And do your best with every job because you’re only as good as your last case”.

In case you’re wondering about the time the cow knocked him out Shane puts us right:  “The farmer actually asked me to castrate a calf for him when I came around so obviously I didn’t look too bad.  I did end up in A and E with concussion though”.    And did he oblige with the castration?  “No, unfortunately, I had to give it a miss that day”

What about the sheepdog that ate the rope?

“Flying”, says Shane.  “Believe it or not he turned out to be a champion trialist”.