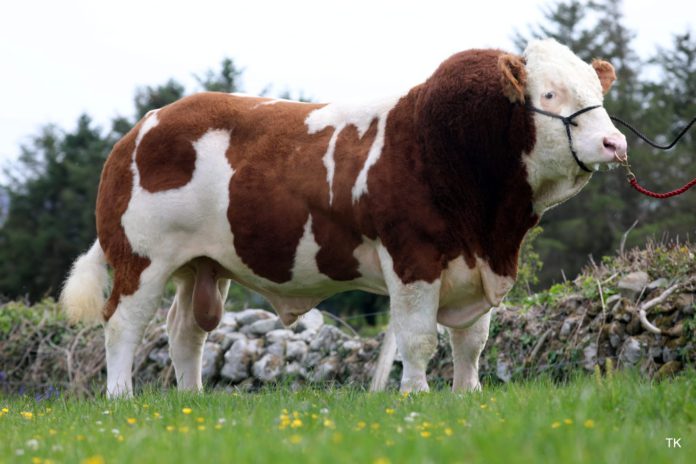 Breeders from across the island of Ireland exported four pedigree Simmental bulls overseas earlier this month.

The consignment was organised privately by breeders, who were contacted by a representative from Horizon Genetics, which has secured a contract to supply Simmental semen to the Chinese market.

Speaking to That’s Farming, Shane Silke, said: “The buyer from the American-based company forged a connection with these breeders after discovering their herds on Facebook and asked if they had any bulls for sale.”

“A deal was sealed for four pedigree Simmental bulls. We organised everything from there on including testing and each animal was quarantined on their own farm for six weeks, which was overseen by Department of Agriculture officials.”

Vets were provided with a list of tests to conduct and obtained blood samples which were sent to FarmLab Diagnostics, Emlagh Lodge, Elphin, Co. Roscommon, Silke added.

“The bulls had to venture to Italy where they will undergo a six-month quarantine period. All test results from here have to go to the Italian AI station and if there are any issues, they will not accept the bulls.”

“After six months, the bulls are then retested before they are then jumped, and semen is collected. They are permitted to export the semen from there to China.

Silke explained that educational seminars on how best to use Simmental bulls will be delivered in China to enhance breeding programmes on farms.

“The buyer is exploring his options. There are more than twenty million Simmental cows in China at present.”

“The buyer explained that Chinese breeders are looking to increase the terminal ability of their cattle, with a view to moving more towards a dual-purpose-type animal. They have been using Simmental genetics from other countries over the years.”

“Going forward, they will be continuing to tap into the Irish market for top-quality Simmental bulls,” Shane concluded.

Silke also confirmed to this publication that semen from Portroyal Kratos P and Tawley Jaguar will be marketed in North and South America, Canada and across Europe.